I am trying to identify a comic book that shows Superman going up against a mutated wrestler wearing green? 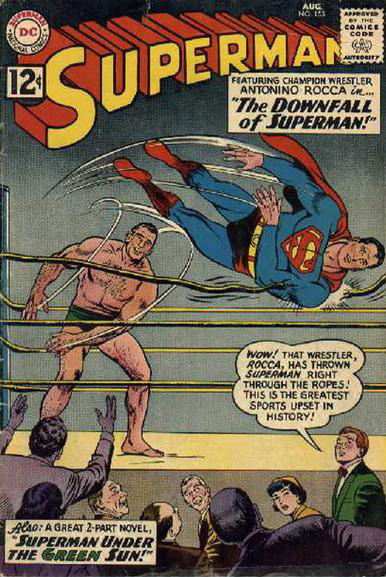 The Superman Homepage explains the story.

It includes a wrestler wearing green, whose strength has been augmented by magic.

It guest-stars real life pro-wrestler and Heavyweight champion Antonino Rocca, who wrestled in the 40's through the 70's, one of the organizations he wrestled for eventually became the WWE. Superman and Rocca have an exhibition match, and Rocca throws Superman out of the ring. Superman and Rocca are really disguised as each other to fool the crook, a big wrestling fan, into thinking Rocca is stronger, and hiring him to move a boulder which fell across the opening of the cave. Rocca's superior strength was explained by an appearance of Mr. Mxyzptlk, claiming it was his magic that made Rocca stronger.

As answered on your other question, the comic you're looking for is Superman Special #10, a German-only issue originally published in 1976 and reprinted in 1985.

The villain, Benny Baker a.k.a. "The Fist", is depicted on the cover wearing a one-piece sleeveless green bodysuit. The cover is very similar to the one posted by @phantom42, in which Benny is shown tossing Superman out of a wrestling ring.

2
1980s Superman comic where he fights a blonde mutant

5
Where can I find a list of all the Superman comics' shield numbers?
16
What Superman comic “proved” Clark Kent is not Superman using a cardboard cut-out?
10
Superman/Supergirl in ancient Rome/Germany?
2
1980s Superman comic where he fights a blonde mutant
5
Which comic first shows how Superman built his “Fortress of Solitude”?
2
“First I bring you Christmas greetings; afterwards I give you beatings!”
10
What is this comic in which Superman fights Death?
7
Identify DC Comic Book With Alien Invasion/Occupation of Earth
8
70s-80s DC comic in which a demon devours a man in a Superman costume
10
Superman comic book with an alien villain who was frozen and dumped in deep space, rather than being executed