Searching for a Particular Comic

I am looking for a particular comic from the DC universe.

The basic premise is that four "super-villains" including Brainiac, a female wearing a superman symbol who can shape-shift (perhaps Matrix Supergirl), an ogre creature wearing a backwards superman symbol, and another female with psychic abilities kidnap Metron. Orion and Lightray attempt a rescue but are captured by the villains. Superman is left to form a team, rescue the hostages, and stop Brainiac.

Panic in the Sky

In the early 1990s, Brainiac returned in the "Panic in the Sky" storyline. He seized control of Warworld and manipulated Maxima into assisting him. Then he brainwashed Supergirl and the alien warrior Draaga before capturing Metron and setting off for Earth. Orion and Lightray of New Genesis attacked Warworld, but they were quickly taken down by Maxima and Supergirl. Brainiac sent the mental image of the New Gods captured to Superman in order to taunt him, and he also sent his "headship" (a green-hued variant of the pre-Crisis skull-like ship) to Earth in a punitive expedition.

These acts prompted Superman to go on the offense rather than wait for the inevitable invasion. He gathered a coalition of most of the world's superheroes and launched a preemptive strike at Warworld before it could arrive on Earth.

A small, elite force was left behind for any scouting forces that would be sent ahead. Superman led the attack on Warworld, where Supergirl and Draaga managed to shrug off their brainwashing and rally to Superman (although Draaga was killed in the fighting).

Brainiac briefly took control of some of Earth's heroes, but it was not enough to turn the tide. Maxima would shortly switch sides in the fighting too, perceiving Brainiac as the true villain at last. Flash, Maxima, and the Metal Men attacked him in his lair, where Maxima managed to lobotomize him (but was stopped short of killing him). His vegetative body was taken back to New Genesis for observation. 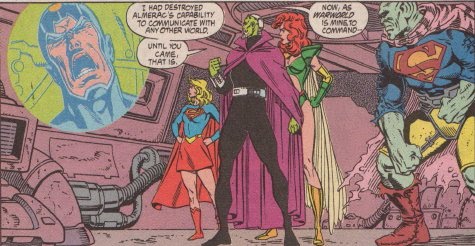