Why does the Empire allow the Hutts remain in power?

After the Emperor took over the Galactic Republic and eliminated the Jedi threat, he had a huge fleet and massive army. The Hutts' own the largest piece of space after the Empire and their planets are criminal cesspools. Why not eliminate the Hutts, now that the Republic is secured and the Rebels seem to pose little to no threat?

I'm open to anything in the EU that talks about this as well.

Although Palpatine had considered attempting to wipe out the Hutts, he also understood their usefulness. After all, the Hutts were not simply a criminal syndicate, they were a vast power - the second largest & most influential after the Empire - and they were heavily involved in the economy of the galaxy. Indeed, even the Empire often found itself doing business with Hutts.

From a military standpoint, it's possible that the Empire might be able to defeat the Hutts, but it certainly wasn't a given. All of the Hutt kajidics (or clans), combined, controlled a formidable force of pirates, mercenaries, and ships - far more than most actual civilizations, and possibly second only to the Empire itself.

In addition, Palpatine had allied himself with the Hutts early on in his rise to power. After becoming Emperor, he allowed the Hutts to pay a stipend (essentially a bribe) that would ensure the Empire left them to do business in the Outer Rims without interference. This was mentioned in the EU novel The Hutt Gambit, which also indicated the Hutts had numerous Imperial officers on the take in addition to the Emperor's tribute.

And, to the previous point about practical combat, The Battle of Nar Shaddaa (also in The Hutt Gambit, but discussed from an Imperial pilot's perspective in the Rogue Squadron comics) shows a group of pirates, smugglers, and mercenaries repelling the forces of an over-zealous Moff. Granted, however, that may not be the best example since the Admiral in charge of the Imperial fleet was implicitly ordered to lose by the Emperor himself.

Attacking the Hutts was extremely dangerous - economically, politically, and even practically.

Because they don’t bother the Empire

The Emperor primarily cared for crime insofar as it interfered with his sinister machinations:

“Lest any of your current activities infringe on the Emperor’s designs,” Vader continued, “you may wish to consider relocating your operations to sectors in the Outer Rim. Or you may opt to remain on Coruscant and risk lengthy sentences in an Imperial prison.” He paused to let his words sink in; then, with his gloved hands akimbo and his black floor-length cape thrown behind his shoulders, he added: “Or worse.”

Vader may have been more concerned with order, but as long as organized crime was, well, organized, and did not interfere with the proper running of the Empire, he had little quarrel with it.

Because they can be of use

The Empire in general, and indeed Darth Vader in particular, was not averse to making deals with criminal entities. For example, the Crymorah syndicate was given a certain latitude by the Empire:

Vader looked down at him—blankly? Perturbed?

“We have reached an accommodation with the Crymorah,” Vader said.

In exchange, they provided the Empire with information on dissidents and malcontents, many of whom they could presumably observe more effectively than the Empire:

“Not entirely, my lord. The increased activities Vice Admiral Rancit alludes to could be the result of holovids transmitted from the Carrion Spike. COMPNOR surveillance and investigation operatives in several sectors have noted an increase in both anti-Imperial propaganda and mobilization among malcontent groups. ISB is making arrests and interrogating prisoners in various Imperial facilities in an effort to learn the identity of the culprits. As odd as it sounds, my lord, we have also been receiving intelligence from the Crymorah syndicate, which apparently shared some nefarious affiliation with the criminal subcontractors who operated Phindar’s fueling station.”

But most important, because they don’t intend to let them remain in power

In Darth Vader #1, we see that Palpatine’s ultimate goal is to take direct control of the Outer Rim, which is where most of the criminal organizations have their operations: 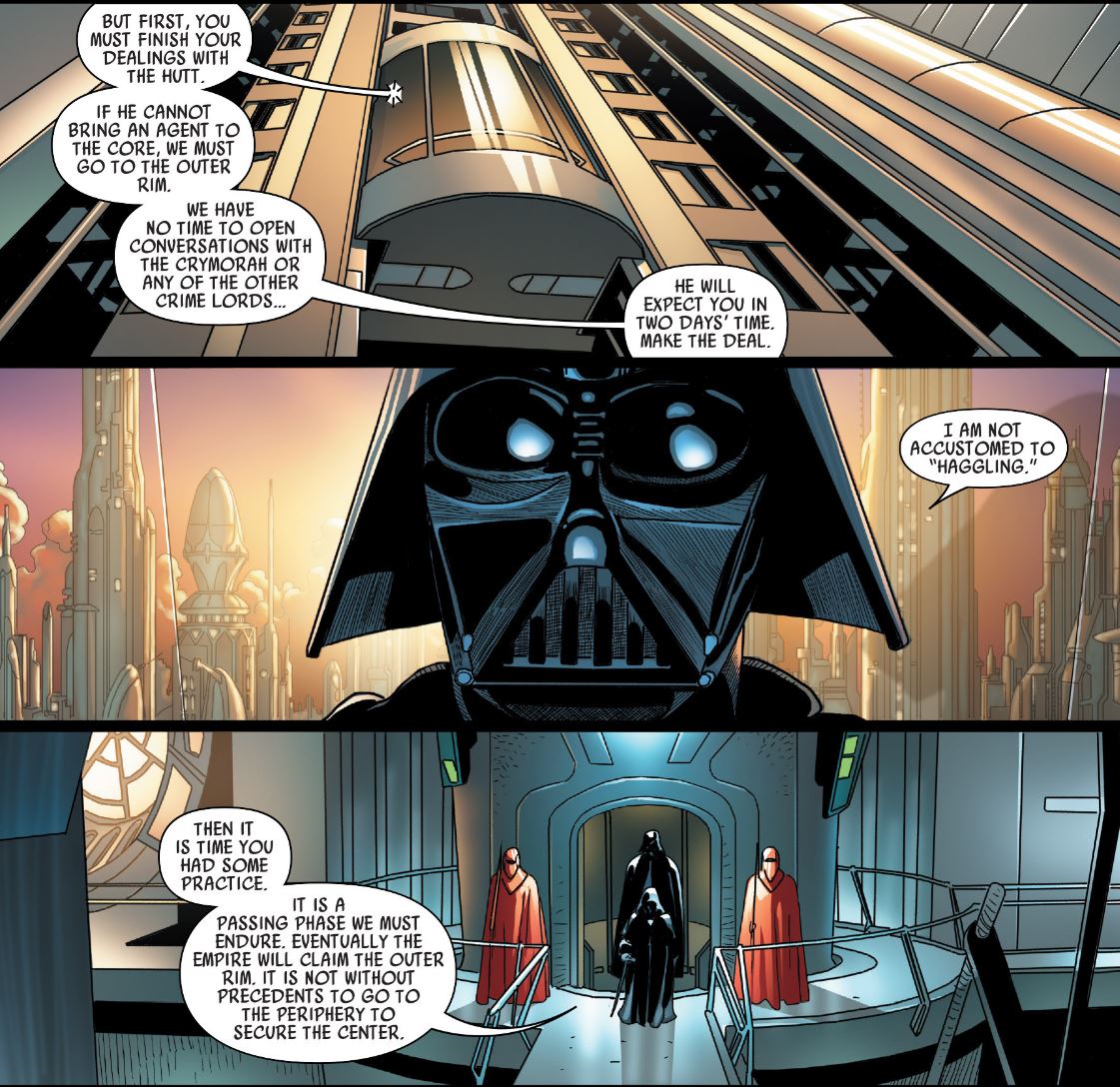 So Palpatine was certainly willing to allow criminal organizations to operate while he consolidated his power. They served a useful purpose, managing resources and intelligence fairly efficiently, and generally didn’t bother his plans for worlds closer to the Core, where he was still facing fairly heavy resistance. Presumably subjugating them would have been a great deal of effort for comparatively little gain, and might even have led to short-term losses (such as the Hutts’ efficient networks of resource and information transfer). But as with the Imperial Senate, tolerating the Hutts (and any other criminal group), was merely an interim measure while Palpatine further consolidated his power. His ultimate goal, whether through the Death Star or through the Force, was ultimate personal power over the galaxy:

In the intervening years he had actually come to appreciate Plagueis for the planner and prophet he had been. Such perilous machinations required two Sith, one to serve as bait for the dark side, the other to be the vessel. Success would grant them the power to harness the full powers of the dark side, and allow them to rule for ten thousand years.

So the Hutts were allowed to remain…for the time being.

Empires don't necessarily choose to attack and conquer every other power around them, particularly if the other powers have some use to them, if the empires don't have any particular reason to do so, and certainly not immediately when they have other concerns and threats to focus one.

During the period covered between the end of Star Wars Episode III and Episode IV, Emperor Palpatine was still consolidating his power, as seen in the scenes in Episode IV where the declining influence of the Senate are discussed. In Episode's V and VI, Emperor Palpatine is still preoccupied with eradicating the Rebellion (reasonably so, considering his eventual failure).

Since the Empire is ruled by Palpatine, who is a Sith Lord, the Hutt's style of wicked overlordship is probably not distasteful, and is even useful for generating dark emotions and situations which he might prefer to keep going, rather than to eradicate. They're also powerful, and converting an effective ally to a large enemy probably isn't something he would want to do, at least not in the time frame shown in the films.

13
Why did the Sith Empire propose the “Treaty of Coruscant” after capturing Coruscant?
38
Who became Emperor of the Galactic Empire after death of Emperor Palpatine?
60
How did Jabba become such a powerful crime lord?
28
Why didn't the Grand Army of the Republic overthrow Palpatine when he announced the Empire?
8
How did the New Republic gain control of Coruscant?
26
Why did nobody know about the Sith Empire?
4
How does Obi-Wan find out about the Empire in time to mention it in his warning?
14
Why did the Empire need Force-wielding inquisitors and agents?
35
Who led the Empire after Palpatine in the Disney canon?
10
What was the state of the Hutt military?