I am wondering what the exact differences are between the refit USS Enterprise (first three Star Trek films) and the USS Enterprise-A (subsequent three films)?

In particular, which ship, if any, is more powerful in terms of size and technology? Has there ever been an in-depth comparison between the two anywhere in books or other sources?

Athough both ships are classified as "Constitution" class, there are several differences between the two. The original NCC-1701 was an older-style Constitution that was upgraded with more advanced components, whereas the NCC-1701-A was a brand-new, state-of-the-art vessel as of its launch. The two vessels appeared identical externally, and the dimensions and layout of both vessels matched up as well. Internally, however, was a different matter altogether.

The NCC-1701-A had numerous improvements over its refit predecessor:

Many of the improvements were from an aesthetics or usability perspective. However, the majority of systems became automated on the NCC-1701-A, which could conceivably offer an advantage (perhaps a decrease in reaction time) during combat.

Both the refit and the A variant are considered Constitution Class Starships. Externally they are identical, while the majority of internal differences are cosmetic or layout in nature. The torpedo room is more automated in the A compared to the refit, with smaller but equally strong torpedoes. But otherwise, both had the same speed, offense and defense specs.

This is a possible addition to most of the answers which have mostly covered the differences. It bears mentioning that in my opinion at least until The Undiscovered Country, it is my contention that the Original Refit Enterprise was superior in overall power, resilience, and some equipment to the Enterprise-A, assuming she had her full crew.

My points in support of that statement:

Well that's likely it, and while it is my opinions of course, I like to think that it warrants mentioning the above in this discussion. Lastly, I also like the coloring of the Refit better I.E. in ST II, in almost every way, and I like the ST I bridge best to go with it. So I think the original Refit wins there too.

Let me know what everyone thinks.
(I would have preferred to have just left a comment, but insufficient reputation so..)

There was one external difference. They had to repaint the model so the pearl accents on the engine section were originally a greenish-grey on NCC-1701 vs a light blueish-grey on NCC-1701-A. It's subtle, but for a bit of fun one can assume that other Constitution class refits might have had slight color differences: maybe a violet-greyish for some, or maybe reddish-grey?

There are some differnces externally, windows and paint job. 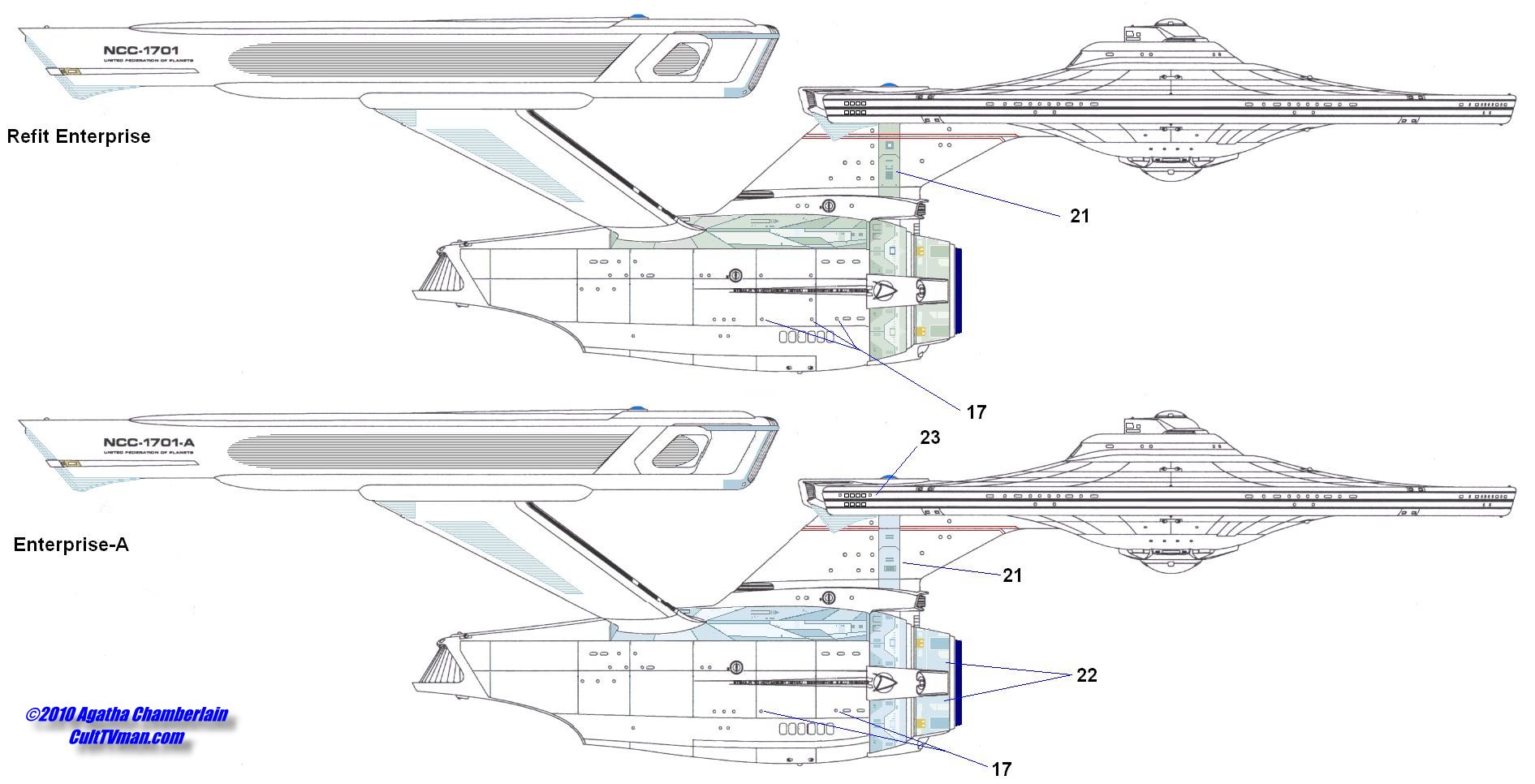