A story I read in about 1986: A boy meets an alien, his mind is wiped afterward

I remember reading a short chapter book when I was a kid. Here's the story: Boy lives on a farm. The boy meets an alien. Another alien, the alien's rival (of some sort) tries to take him away because he knows aliens exist. At some point, the following things happen in the plot:

One alien or the other dismantles the old barn on the farm.
The alien's rival makes it impossible for his parents to believe him about there being aliens. When the rival alien tries to kidnap the boy, he is quickly set down outside so his mother doesn't see him being lifted into the air. He is set down in another place, and walks back into the house to tell his mother he was almost kidnapped, and points to the footprints in the snow as proof. She smiles and says he just walked backward through his footprints.

It's possible that the book had a title something like "Dan in space" or "Duncan and the alien". Probably published in the late 1970's, given what my school district could afford.

The barn demolition incident is from "The Boy From the UFO". Barney and his little brother Scott are orphans living on a farm with the Mr. and Mrs. Crandall, who Barney hopes will adopt them. Barney meets an alien boy named Tibbo, but doesn't tell anyone because he's afraid the Crandalls will think he's crazy and not go through with the adoption. Tibbo wants Barney to come back to his home planet Gark. At one point, as a demonstration of his power, Tibbo disassembles the old barn on Mr. Crandall's farm.

Due to a misunderstanding, Barney thinks the Crandalls have decided not to adopt him, and in his anger and disappointment he nearly leaves Earth with Tibbo. But the Crandalls do want to adopt both Barney and his little brother Scott. Barney realizes he has a loving family on earth, so he stays. 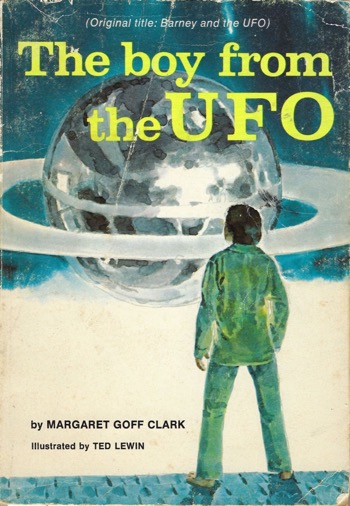 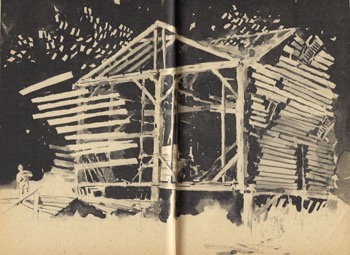 The sequel is called "The Boy From the UFO Returns". After the events of the previous book, everyone's memories have been wiped except Barney's, so nobody remembers the aliens. Now, a bad alien named Rokell is trying to kidnap Barney, and Tibbo (the friendly alien) is trying to prevent it. Rokell first tries to snatch Barney up with a tractor beam when he's out walking in the snow (hence the line of footprints ending mysteriously in the fresh snow.) Later, Rokell graduates to attempting to straight-up kill Barney, first by attempting to push him through the ice into a frozen lake, and later by triggering an avalanche. Tibbo thwarts the attempts, and eventually there is a showdown fight on the moon. 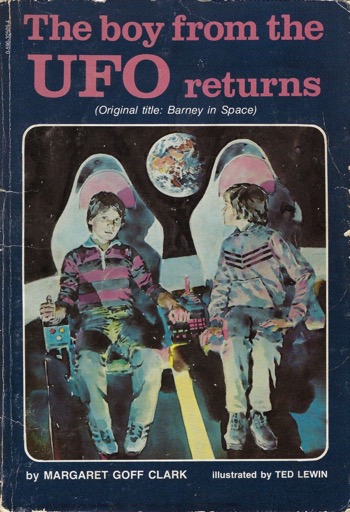