Where did the Transformers ammunition come from?

The question says it all. In the cartoon and comic canon, all of their weapons are strictly energy based with an occasional missile. In all of the movies, 99% of the weapons fire ammunition that uses what appears to be a chemical propellant similar to that which is found on earth.

My question is, is this just for visual flair? Is there any sort of back story to this? Admittedly, it's quite visually stimulating to watch Optimus Prime clearing a spent round.

The scene from above

Also, the scene from the first movie where they expose a cell phone to the Allspark energy and it turns into a nasty little Decepticon. It is able to create a mini RPG and ammunition for its micro mini-gun seemingly from thin air.

TL;DR: The creation of ammo is a natural bodily function.

In Transformers: The Reign Of Starscream, it is theorized that their weapons and ammo grow like our own hair or fingernails. 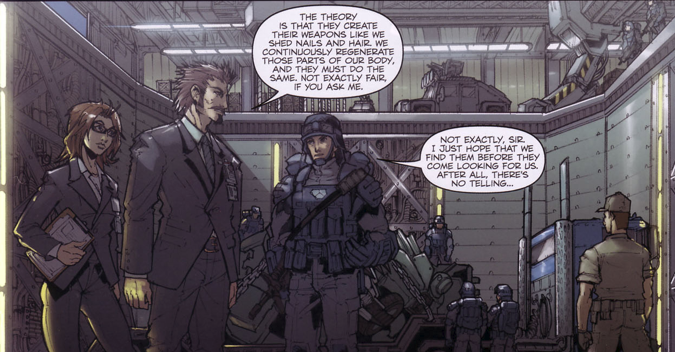 However, while logical (ok, as logical as anything in Transformers), this is conjecture on the part of the humans.

It should be noted, however, that while this comic line was considered official sequel to the first movie, there are discrepancies between it and later movies (namely an existing space bridge between Cyberton and Mars).

This was also briefly addressed by Ironhide in Transformers: The Veiled Threat, which serves as the official prequel to The Revenge Of The Fallen. They ingest metal and turn it into whatever resources they need (please don't ask me how Bumblebee eats, since he apparently has no mouth).

We have within ourselves the ability to ingest raw materials and rapidly reproduce a wide variety of necessary resources depending on the necessities of the moment. Our advanced design and construction demands that each of us be able to repair and replenish much of which we are composed and which we use. All of us have these abilities, though some are more adept at certain aspects than others. Mine is weaponry, Ratchet's is repair.

It is possible that the Transformers create their own ammunition.

Consider that the Transformers (as seen in the movies) can and do adjust their apparent mass (otherwise planes the mass of transformer-sized robots couldn't fly under physics as I know it). They have some sort of esoteric ability to store mass when they transform, so it isn't impossible to assume they can produce ammunition for their weaponry from the same source.

Consider that in the first movie, we see Bumblebee excrete (he drains fluid 'humorously' onto a human he doesn't like). The fluids he drains aren't vital to his car form moving (he shortly after transforms and drives off without problem), and they appear to be a significant amount.

Based on this, I have been assuming that Transformers are capable of producing ammunition for their inherent weapons as an automated process, which likely requires consumption of raw materials.

For other, Transformer-sized weaponry, that is not 'built-in' they could manufacture it in similar ways to how humans make bullets and rockets. It's possible that the Transformer's base has some form of ammunition manufacturing.

To add here: Transformers 3 and 4 changed things a lot with the weapons of the transformers now being ONLY hand held weapons which can run out of ammunition (instead of mostly built in weapons like in transformers 1 and 2).

In Transformers 3 we see the Autobots defenseless without their hand held weapons.

In transformers 4 we see that they can run out of ammunition (which before was never the case).

Not the answer you're looking for? Browse other questions tagged transformers optimus-prime or ask your own question.

5
Where do the Transformers get their ammunition from?