In which Stars Wars book(s) can I find more about Jango Fett and his selection as the Clone Army template?

I want to explore more about Jango Fett with emphasis on his selection process as the Clone Army template. In which book (from Legends canon of course) can I find that?

The story of how Jango Fett was selected for the Grand Army of the Republic was covered in the video game Star Wars: Bounty Hunter. The description from Wookieepedia:

Star Wars: Bounty Hunter preludes Episode II Attack of the Clones and tells the story of how and why Jango Fett became the template for the clones of the Grand Army of the Republic.

When the leader of the Bando Gora cult, Komari Vosa, became a threat to Palpatine's plans, he instructed Dooku, his apprentice, to eliminate her. He also charged Dooku with the task of finding a suitable person to become the template for the future clone army. Dooku decided that he could accomplish both of these tasks by putting a bounty on Vosa, and he only invited the very best to take up the challenge. These included two former Mandalorians: Jango Fett and Montross.

Since the story was covered in the video game I don't think there is a novel which covers the story. As indicated in the description, Komari Vosa is central to Jango's selection as clone template. Wookieepedia has a short list of appearances for her, and her main appearances are in the aforementioned video game and and the novel Maul: Lockdown. However, Maul: Lockdown takes place before her death and does not mention Jango Fett. The closest I can find to a book which explains how Jango came to be the clone template is the comic book series Jango Fett: Open Seasons. The description from Wookieepedia (emphasis mine):

Jango Fett: Open Seasons is a comic series that delves into the dark past of Jango Fett. Most notably, the series reveals how Fett became a Mandalorian warrior, and how he was recruited by Count Dooku. It is a tie-in to Star Wars: Bounty Hunter video game. It is a virtual version of the real comic. 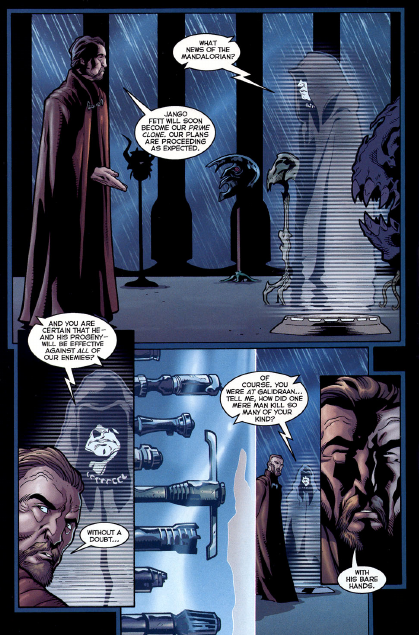 33
Does Boba Fett know his exact relationship with Jango Fett? If so when/how did he find out?
7
In The Clone Wars, is Jango Fett still Jaster Mereel's protégé /adopted son?
5
Why didn't the Separatist leaders look surprised about Jango Fett?
28
Why/How is Boba Fett considered a Mandalorian?
5
Was Boba Fett implanted with the inhibitor/control chip?
66
Why was only one person used as the template for the Clone Army?
21
Is Palpatine just lucky that Obi-Wan discovers the clone army and then the Separatist plot, justifying his emergency powers?
10
How was Jango Fett chosen?
5
Did Boba Fett's armour use durasteel or beskar?