Where do you park a Star Destroyer at the Death Star?

The Death Star is a huge space station, literally the size of a moon. Now I know you can park TIE fighters and shuttles and even craft as big as the Millennium Falcon inside of the station. But when you see this photo: 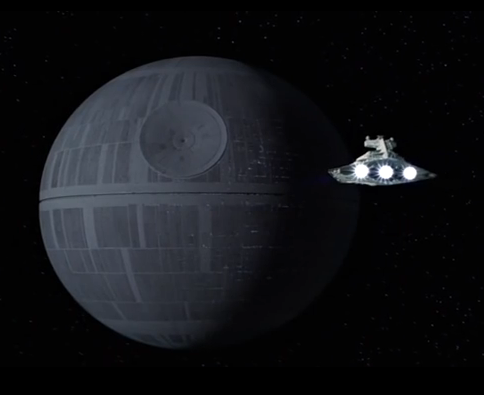 Where exactly do you park a Star Destroyer at the Death Star? In the first episodes of the series, we've seen that the older version of star destroyers could actually land on the surface of a planet. While I'm certain that this newer version doesn't normally do that, would the Death Star actually have a landing bay for a vehicle this size?

Once again, where do you park a Star Destroyer once it's at the Death Star?

First, I find it hard to believe that those are scaled similarly. The Imperial Star Destroyers (both the first and second class) are 1,600 meters long. Essentially, they are about a mile long. You could run from one end to the other in less than 10 minutes.

The Death Star was the size of a small moon. The first Death Star was a rough sphere 120 kilometers in diameter. In other words, a Star Destroyer's length was 1.3% of the Death Star's diameter. A docking bay capable of holding a Star Destroyer would need to be enormous. Let's assume the Star Destroyer is a rectangular block 1600 meters long, 800 meters wide, and 800 meters high (which it isn't, it is significantly smaller than that) and that a docking bay needs to hold two of those with sufficient space for clearance and maintenance hardware. Let's say this results in a bay that is 1800 meters long, 2400 meters wide, and 1000 meters high. That is a volume of 4,320,000,000 cubic meters (4.32 cubic kilometers).

That sounds HUGE, right? It really isn't, compared to the internal volume of the Death Star. The Death Star has an 60,000 meter (60km) radius. Plugging that into the calculations for the volume of a sphere, we find that it has a volume of 904,779 cubic kilometers.

That's means the theoretical bay would be less than 0.0005% of the internal volume of the Death Star.

So you can see, there could be LOTS of places they could put a docking bay for a Star Destroyer.

That said, there's no real need for them to have a docking bay for ships that size.

The purposes of docking bays is to allow maintenance, restocking of provisions/fuel, personnel movement, etc for small craft. You park the Millennium Falcon, Chewie can climb up on top and mess about with hardware, you can attach feeder hoses to restock the water reserves, reclaim waste, refill consumables, etc. People can walk onboard or leave. All of this is needed with small ships, where space is as a premium.

Star Destroyers don't need to dock to accomplish this. All of their routine maintenance is done without docking. They were designed such that anything they can repair out of onboard capabilities can be done without needing to dock. They have personnel who are trained to work EVA in those rare cases where external repairs are needed, and they have machine shops and engineers who can produce most of the parts they could need.

Refueling is not something that has been addressed. We know (according to Wookieepedia) that the ships are powered by an 'I-a2b solar ionization reactor', which is referred to as seeming like a miniature sun. This reactor uses fully half of the volume of the ship, and the fuel it consumes is unknown. The Imperial Star Destroyer is listed as carrying 'consumables' for 2 years for its standard crew complement (according to a rulebook published in 2014 for a licensed game). Given that, we can assume that the ship was expected to not need to take on consumables for about a year at a time. It would be reasonable to assume that it refueled when it restocked.

Star Destroyers that aren't in need of severe maintenance would find it easy to orbit the Death Star (as it could any moon-sized object). Those which did need serious maintenance would likely have been sent to a dedicated repair facility, such as Kuat Drive yards (where many were constructed). 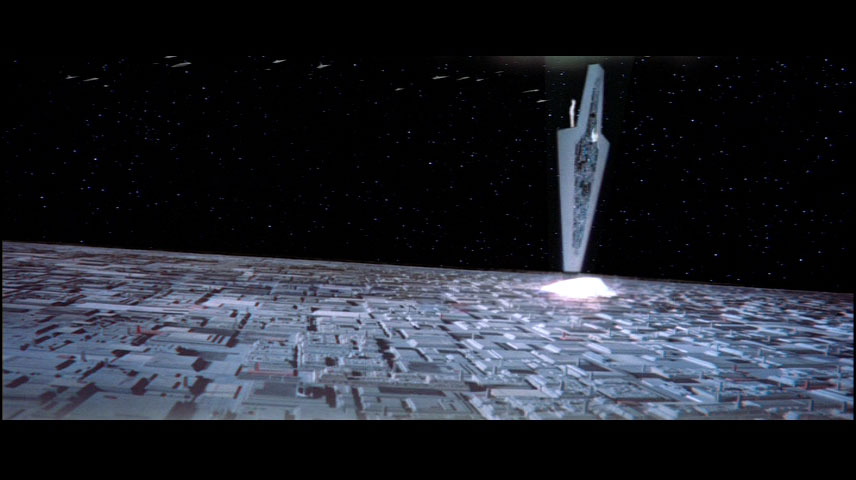 As you can see, even a Super Star Destroyer is much smaller than the Death Star.

Of course, this was the second Death Star, which was just a tad bigger than the first one — a diameter of 160 kilometres vs 120 kilometres.

Your picture shows a Star Destroyer approaching the Death Star, but it seems to be still a long way off, which is why it looks relatively big, compared to the Death Star.

The DS-1 Orbital Battle Station (also known as Death Star) did not have any specific docking bays for Star Destroyers. It had numerous docking bays for smaller ships, like TIE-class fighters and bombers, or landing shuttles, along its equator in a 1 km wide trench (source: Wookieepedia article on the Death Star).

They didn't need a special docking bay for larger ships, because nearly all Star Destroyers had their own docking bays, so they could simply shuttle over. Also, consider that a docking bay of that size would require a massive forcefield to keep the air in. (source: Original Trilogy footage).

In addition, the way physics work is that it would be very difficult for a Star Destroyer to stay airborne in the artificial gravity the Death Star has without inflicting massive structural damage to the docking bay. This is because, for the Star Destroyer to stay airborne, it would have to exert a force equal to its own mass on the floor. According to https://archives.swc-empire.com/a/index.php?title=Imperial_Star_Destroyer_I, an Imperial I Star Destroyer can weigh 6.4 million T. You would need a VERY strong docking bay floor to support that kind of weight.

However, the DS-1 does have a number of dry docks. I am not sure how canon these are, since this whole new Canon/Legends division has me confused, but here is an image from https://starwars.fandom.com/wiki/Death_Star 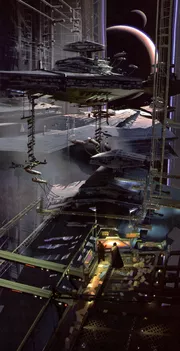 The Death Star had mooring towers for docking large spaceships like Star Destroyers.

The movies never address the question, however the series background FAQ might. In the movies, we do however see multiple times shuttles landing on the death stars to transport resources, troopers and dignitaries (specifically Vader and Palpatine).

So i would say that it is far more likely that star destroyers do not dock and instead use shuttles to transport between the ships.

However as mentioned above, the death star would have adequate space for thousands of star destroyer docking bays, so it is not at all out of the question.

From what I recall of the original “Star Wars” movie trilogy, Star Destroyers would only ever have been “parked” around the Death Star, not inside it, even though I suppose there would be plenty of room to park a whole fleet of them inside.

First, as @SOB's picture points out, the Star Destroyers are still noticeably smaller than the Death Star, and so one could potentially fit inside.

Second, we can see that the Millenium Falcon manages it by a simple application of landing struts. 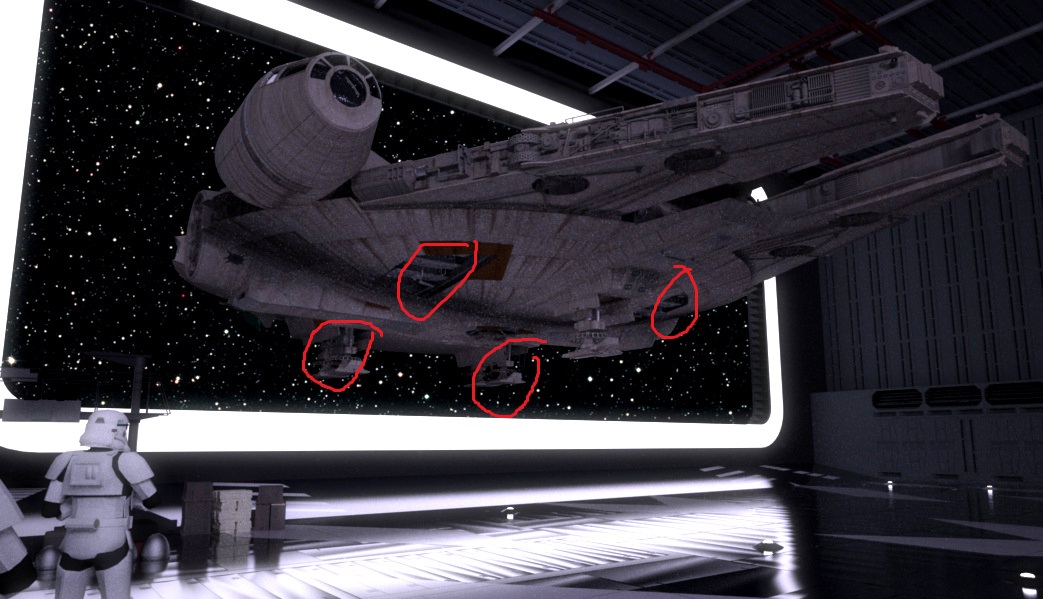 While a Star Destroyer could potentially have landing gears to do the same, evidence is inconclusive at best on whether or not they do - and leans towards 'they don't'. However, 'older' models do in fact have landing struts, which were designed-on in the prequels that came out after ANH-ROJ.

They could also dock by hanging, which is how TIE fighters do it in some canon, but there's even less evidence to support this theory.

So while there are some ways in which a Star Destroyer could dock internally with the Death Star, none seem to be shown in any canon.

54
How big is the Death Star compared to the Executor
20
Can an Imperial-class Star Destroyer land?
9
Are there any incidents of collateral damage in Star Wars?
21
What is the largest-size vessel the Death Star could accommodate inside any hangar bay?

18
Star Wars RotJ: why was the Executor chosen as a target?
9
Are there any specifications of the inside of Star Wars ships available?
26
Why was the Death Star's tractor beam not used as a weapon during the battles?
20
What is the ship in this scene?
8
Why is the Death Star so lightly defended?
21
What is the largest-size vessel the Death Star could accommodate inside any hangar bay?
30
Do shields on small craft work?
8
Where do X-Wing fighters—and similar small scale Rebel craft—dock to refuel and tune up when in space?
66
Why didn't the Rebel Alliance (or the Empire) build YT-1300 light freighters with the same specs as the Millennium Falcon for space combat?
15
Why didn't the Imperial fleet detect the Millennium Falcon on the back of the star destroyer?