Read a great sci-fi novel in the 90's about a device that was invented allowing people to see back in time. You had to go through everything, kind of like watching a movie on a vcr in fast rewind. You could enter where you wanted to watch, not sure if you could specify who to see. Eventually, society crashed because there were NO secrets anymore. It wasn't time travel, it just allowed people to see the past. As with most inventions, governments and scholars were the first to use it. Then, as economies of scale kicked in, it became cheap enough that average folks owned them, and that's all they did was watch.

I believe this is the book "Light of Other Days" by Stephen Baxter and Arthur C. Clarke. While it is from one year later than you specify (I.e. published in 2000), the premise fits very close to what you are describing.

In particular that the technology starts off as a trade secret, then gets used by large corporations, then economically becomes cheaper and cheaper until it becomes available to all. At that point:

"When the technology is released to the general public, it effectively destroys all secrecy and privacy. The novel examines the philosophical issues that arise from the world's population (increasingly suffering from ecological and political disturbances) being aware that they could be under constant observation by anyone, or that they could observe anyone without their knowledge."

"'Space is what keeps everything from being in the same place. Right?' With these words Hiram Patterson, head of the giant media corporation OurWorld, launches the greatest communications revolution in history. With OurWorld's development of wormhole technology, any point in space can be connected to any other, faster than the speed of light. Realtime television coverage is here: earthquakes and wars, murders and disasters can be watched, exactly as they occur, anywhere on the planet. Then WormCams are made to work across time as well as space. Humanity encounters itself in the light of other days. We witness the life of Jesus, go to the premiere of Hamlet, solve the enigmas that have baffled generations. Blood spilled centuries ago flows vividly once more - and no personal treachery or shame can be concealed. But when the world and everything in it becomes as transparent as glass and there are no more secrets, people find new ways to gain vengeance and commit crime, and Hiram Patterson finds new ways to keep his Machiavellian schemes secret."

Towards the end of the novel, there is "VCR like rewind" that goes back farther and farther in time approximately 3 billion years. It is discovered that:

In a climactic time-viewing experiment at the end of the novel, a time hole is opened to the beginning of life on Earth and it is discovered that all existing life is descended from a biological sample placed by intelligent beings (labeled Sisyphans) who inhabited the Earth over three billion years ago, trying to preserve genetic samples when geological and climatic changes and a large bolide threatened an extinction level event. 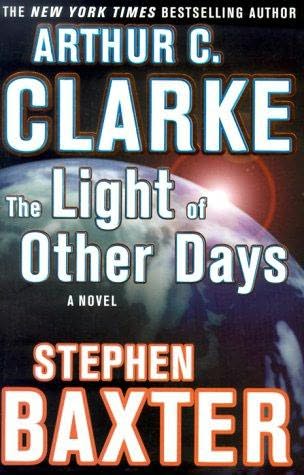 6
Wormhole-like tunnels used to look back in time
3
SciFi book where scientists learn to peek through time (possibly controlled miniature wormhole?). Computer screens were carried like a handkerchief