When I was kid saw a movie about a spaceship found on earth containing two dead astronauts. Can only remember parts and my guess is that MAYBE is from the second half of the 70's:

Thanks a million in advance.

This might be Hangar 18 from 1980, about a government conspiracy to cover up a crashed flying saucer. Here are the humanoid aliens with pale eyes, though I think they were just supposed to be the natural color rather than contact lenses: 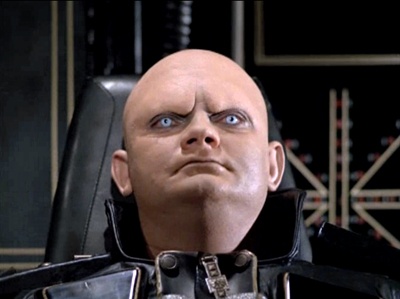 The calligraphic alien symbols seen inside the ship: 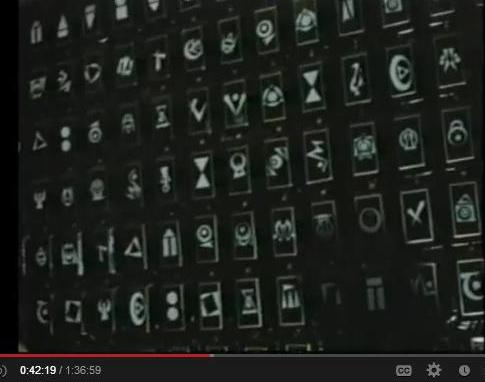 The dead aliens are first seen at 36:05. At 1:02:00 they're talking about the result of the autopsy and they mention they do have an appendix, and that this is evidence of a "parallel evolutionary process", but maybe it's possible you misremembered what they said about the appendix. And at 1:17:30 they explain that the aliens were asphyxiated when some glass vials containing "an element similar to potassium cyanide" and some other compounds broke open (due to a collision with an Earth satellite at the beginning of the movie) and created a deadly gas.

The description of the 'aliens' puts me in mind of the aliens from the Gerry Anderson live-action series UFO, which had the contact lens removal shown in the title sequence and also fits the period given though it was a series and not a movie.

THE DOCTORS GLOVED HANDS WORK ON THE ALIEN'S EYE. THEY MOVE TO SHOW THEY HAVE REMOVED A PLASTIC COVER FROM THE EYEBALL.

Another (admittedly unlikely) guess: 5,000,000 Years to Earth / Quartermass and the Pit

Workers building an extension to the London Underground at Hobbs End dig up skeletal remains. Palaeontologist Dr Matthew Roney (James Donald) is called in and deduces that they are the remnants of a group of apemen over five million years old, more ancient than any previous finds. One of Roney's assistants uncovers part of a metallic object. ...

When another skeleton is found in an inner chamber, Quatermass and Roney realise that the object must also be five million years old. Quatermass suspects it is of alien origin, but Roney is certain the apemen are terrestrial. ...

An attempt to open a sealed chamber using a Borazon drill fails to make any progress. However, a few moments after the drill is stopped, a small hole is seen, though the drill operator, Sladden (Duncan Lamont), is certain it was not created by his machine. The hole widens to reveal the contents: the corpses of three-legged, insectoid creatures with horned heads. Roney and Judd work to preserve the bodies before they decay. An examination of the creatures' physiology suggests they came from the planet Mars.