Can Kitty Pryde phase through material attached to her (e.g. Toad's slime)

If Kitty Pryde has some material directly attached to her, can she phase through the material and leave it behind? Or would the material phase with her?

It has been shown that she can phase other objects she's wearing (like her clothes) or holding, and other people she's touching, through solid material. How much control does she have over which materials do any don't phase with her?

For example, suppose Toad were to attack her and cover her face with his hardened slime, so she couldn't breathe. Would she be able to phase through the slime, letting it fall off of her, or would she need someone else to come along and remove it?

I'm having trouble finding any solid proof, but I suspect the answer is yes, given what we know about her abilities.

The main question here is; Can Kitty phase through something that's already "attached" to her? The specific case you asked about, fending off an attack by Toad, would be one good case. But there are even simpler situations we could imagine her being in. For example, could she phase herself through handcuffs?

Oddly enough, I was unable to find any canonical situations where Kitty Pryde was restrained in that fashion (there must be one, I can't imagine that it has never happened in all of her 35 year history) however, I was able to find one non-canon case where it happened, which may give us some clues.

In the crossover series The Uncanny X-Men and the New Teen Titans, Kitty is one of the X-Men taken hostage by Darkseid. She is chained up to a wall and attempts to phase herself out of the cuffs. In this particular case she was unable to do so, but only because Darkseid made the cuffs out of special ultra-dense material that she could not phase through.

The implication here is that, if they were normal cuffs, she could have escaped. Given that the series was largely written by Chris Clairemont, probably the best-known X-Men writer ever, I think we can safely accept that his vision of Kitty's powers here would match her canon abilities. 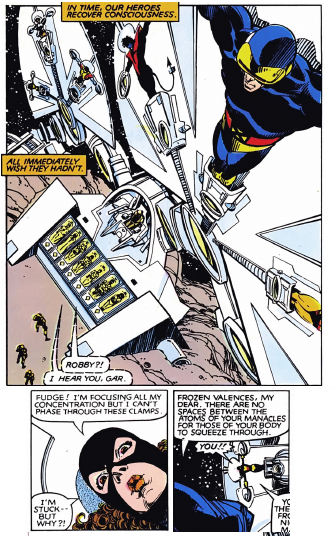 Beyond her potential ability to escape restraints, Kitty is definitely shown to have learned exceptional control over her phasing ability. For example, she has always been able to phase her clothes, but had to learn to phase other objects. Otherwise, the objects would simply fall through her hands (or whatever). Eventually, of course she was able to phase whole groups of people, but in those cases she had to actively choose to do so.

She also has control over which parts of her body phase. For example, she's been shown capable of phasing her arm through the wall such that only the part that intersects the wall is intangible (she punched someone on the other side this way).

Thus, given what we have seen her capable of, I would imagine that she is fully capable of phasing herself out of anything that she gets caught in. I think it would be entirely in line with her previous abilities that she could, for example, just phase out her head, allowing Toad's spittle to fall harmlessly off.

But, as we've also seen, there are limits. There are some things she simply cannot phase through. I highly doubt Toad's spittle has neutron-star-level density, but since I can't find any evidence that it's actually happened, we can't know for sure.

If the screenshot below is any indication, if Toad managed to catch Kitty Pryde out of breath and slime her before she could inhale, then no. As the caption states: Not being able to inhale makes it kind of hard on the girl to phase 'erself. (The caption are Paige Guthrie's view on the issue, hence the accent.) 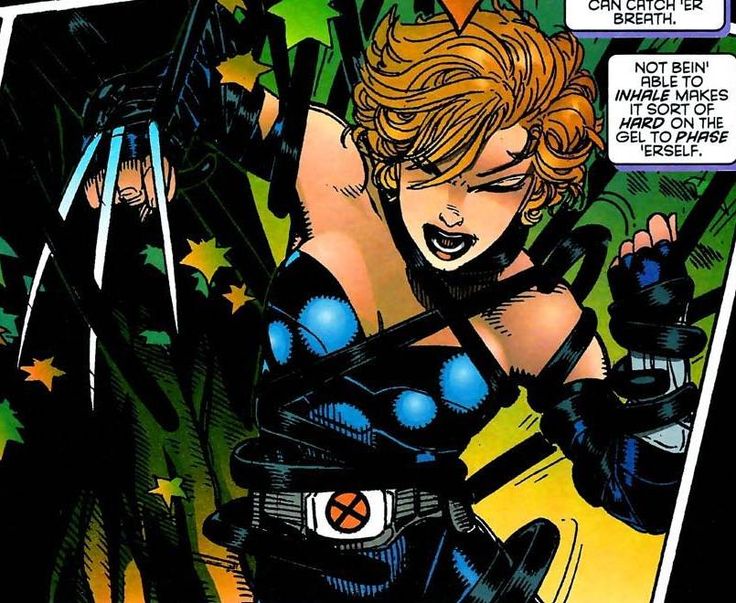