What happened to the holo-communicator?

In the Deep Space Nine episode For the Uniform the holo-communicator is introduced. This tele-presence device allows for people in a long range conversation to appear as though they are in the same room.

After this episode the only other time I recall it being used is at the end of Doctor Bashir, I Presume, when an Admiral is parceling out punishment to Julian's father for his part in Julian's genetic engineering.

Why was this communication device hardly ever used after its introduction? 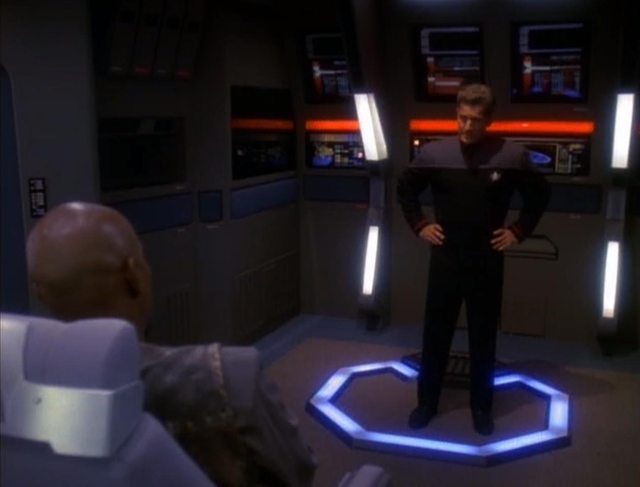 In an interview with the Deep Space Nine Companion, Gary Hutzel (Visual Effects Supervisor for Star Trek DS9) described his deep misgivings with the holo-communicator. In short, it was difficult to shoot and light as well as requiring a lot more blocking and set design than a normal viewscreen shot.

"It was a terrible idea from the get-go. The idea was to create this amazing 3-D image, but TV's a 2-D medium, so it's hard to show that it's 3-D. So you have to move the camera around so that audience can see that it's 3-D, but then it could look to them like the guy beamed in. So you have to find a way to deal with that. It created all these problems that the writers hadn't thought about, and it missed the whole point of why Gene Roddenberry wanted a viewscreen: so you could avoid unnecessary expense."

In-universe, I'd say it took too much energy and the constant combat made it a waste of resources, especially for the Defiant.

I think that in-universe Captain Sisko was visibly upset by the new contraption, thinking that it was a stupid idea for his ship and that it was too personal. How would you like the enemy you're fighting appear as if they are in same room as you while at the same time fighting in space with ship against ship combat?

Out of universe (to the TV watcher) it was irksome. It made things seem not as exciting when not on viewscreen.