1980s Superman comic where he fights a blonde mutant

I was hoping you could help me identify a Superman comic I read.

The main thrust of the comic is that Superman battles a blonde, mutated man who grows bigger and larger.

Does anyone know which comic this is? 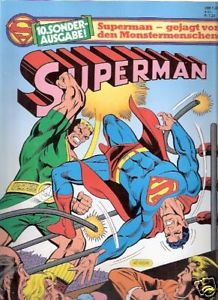 That cover made all the difference. This is Superman Special #10, which is a comic published only in Germany during the latter 1970's. You probably had the reprint from 1985.

The villain depicted on the cover - your mutated blond man - is Benny Baker, a sports writer who received Hulk-like powers from a scientist's formula. Benny took the name "The Fist" and planned on using his new abilities to become the new World's Heavyweight Champion.

The formula given to Benny is a type of "irradiated adrenaline". Therefore, the more his adrenaline pumps, the stronger he gets... eventually reaching a point where he is stronger than even Superman. When fighting in front of a crowd, the roaring & applause of the crowd further gets Benny's adrenaline going, making him even stronger. Superman eventually figures this out and uses it to his advantage.

19
How have Superman comics dealt with the Man of Steel, Woman of Kleenex problem?
5
Who told Clark about the bullet train problem?
44
Hulk vs. Superman - did they ever fight? Who won?
9
When (and why) was Spider-Man called the most important hero of them all?
8
What is this comic in which Superman fights Death?
9
In what animated show was Superman banished to a mirror dimension?
8
70s-80s DC comic in which a demon devours a man in a Superman costume
4
Is Superman more powerful than the Greek gods?
4
Superman comic where he fights a progressively stronger alien creature