Has anyone ever tried to execute the Joker?

Everyone knows the eternal question, "Why doesn't Batman just kill the Joker?" Writers and fans have debated it for decades, and plenty of answers (believable and not) have been established that now we at least can accept the idea that Batman won't be the one to do it.

But I was recently reading the Endgame arc, and an interesting scene occurs:

Gordon shoots the Joker in the chest. This ultimately doesn't kill him, but for a few panels Gordon believes he has killed the Joker. There are literally tears of joy in his eyes as he tells Batman what he did, and that the world is finally free of the Joker.

This led me to wonder, has anyone other than Batman ever tried to kill the Joker? There have been plenty of opportunities where someone could, or at least could make an attempt. We, as the audience, know it probably wouldn't work, but if I was a security guard at Arkham with a taser and a dead sister, and the Joker was strapped to a gurney in front of me, I might give it a yeoman's try...

The Joker is no stranger to straight jackets and prison cells, handcuffs and restraints, any one of which would be an opening for someone to try to take him out. Hell, he spends months or years at a time in a single cell in a known location, it wouldn't be hard to track him down for capital punishment, or just a little personal revenge.

Has this ever happened in the comics? To be clear, I'm less interested in self-defense during a fight (like in the spoilers above), and more in deliberate choices to rid the world of this utter psychopath.

Has anyone ever tried to execute the Joker?

This answer will, by necessity, contain spoilers for the mentioned story arcs:

In the ground-breaking Kingdom Come series, The Joker traveled to Metropolis and used his poison gas to kill everyone in the Daily Planet (including Lois Lane). While he was later surrendering to the police, a vigilante named Magog rushed up to the scene and summarily executed The Joker on the spot in front of a shocked Superman. Magog's acquittal for the act was the event that caused Superman to leave Metropolis and enter a self-imposed exile at the Fortress of Solitude.

In the classic Detective Comics #42 story "The Joker Walks the Last Mile" (1942), the villain surrenders of his own accord and is actually executed for his crimes by the court system. He is later revived, however, so that one may not count. This story was later re-used in Batman #5.

In the parallel Earth of Injustice: Gods Among Us, an enraged Superman killed The Joker with his bare hands after the villain taunted him about killing his wife and son. After crossing a line he swore he'd never again cross, Superman then gave up on his principles altogether and swore to make the world safe by killing ALL villains.

In Batman: Arkham City, Joker is revealed to be dying from his previous exposure to the Titan formula, and exposes Batman to the same disease. After obtaining and using the cure, Batman debated whether or not to cure Joker with it. The vial was destroyed when Joker attacked Batman, so technically it was his own actions that caused his death. However, the fact that Batman had the cure at hand and didn't use it could count as being implicit in the death. (Thanks to @MissouriSpartan for the update.)

In the un-edited version of Batman Beyond: Return of the Joker, it is revealed via flashback that The Joker was shot dead by Tim Drake. This was a direct result of the torture, brainwashing, and general horror that the villain had put him through during his capture days before the event. In the edited release of the film, young Drake instead pushes The Joker into an electrical panel, thus electrocuting him (thanks to @Axelrod for the update).

Also, in addition to the one you mentioned in your question, there are at least two other instances in which Batman himself decided to finally do something about The Joker:

In the Elseworlds arc JLA: The Nail, Batman himself finally decided to end the villain's career and savagely beat him to death before breaking his neck. This may have been a nod to the events of The Dark Knight Returns, in which Batman made the same decision, beat The Joker savagely, yet stopped himself after partially breaking the villain's neck. A spiteful Joker then finished twisting his own neck in order to frame Batman for the killing.

In the 1989 live-action film, The Joker plummeted to his death after Batman anchored his leg to a stone gargoyle using steel cable. It's debatable, however, whether or not Batman actually intended to kill him or simply sought to prevent him from escaping.

Obviously this list isn't exhaustive, as there are likely numerous other examples where the Joker was killed by the actions or inactions of someone in the name of justice. However, as you can see, such examples definitely DO exist.

Not only has somebody tried, somebody has actually succeeded

In Injustice Amongst Us, Superman breaks into Gotham Prison after the Joker tricks Superman into killing his wife and unborn child and brutally executes him, because he feels that leaving the Joker alive will cost far more lives in the end.

In addition to all of the other examples, the Joker nearly got killed by Frank Castle (the Punisher) in the Marvel/DC crossover, "Batman vs. Punisher".

After a massive firefight at a nightclub in Gotham, the Joker tries to escape and Frank corners him in an alley. As the Joker makes wisecracks about how he just needs to be locked up and given enough therapy to be cured, Frank sticks a gun in his face and tells him that he's got all the therapy the Joker needs right here; 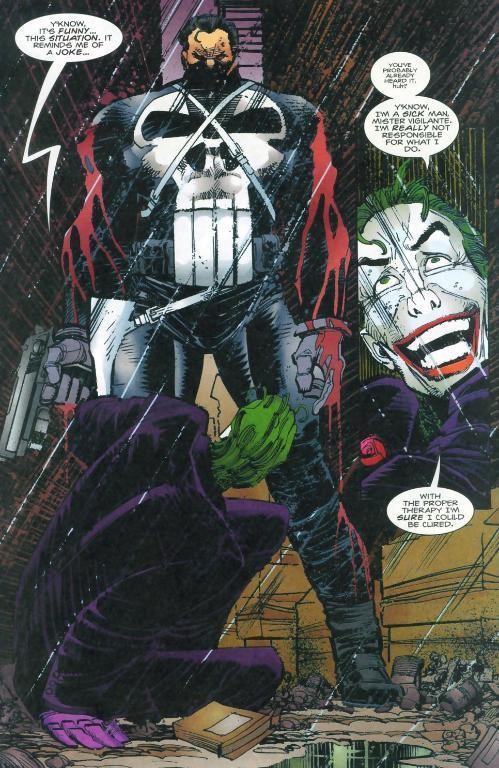 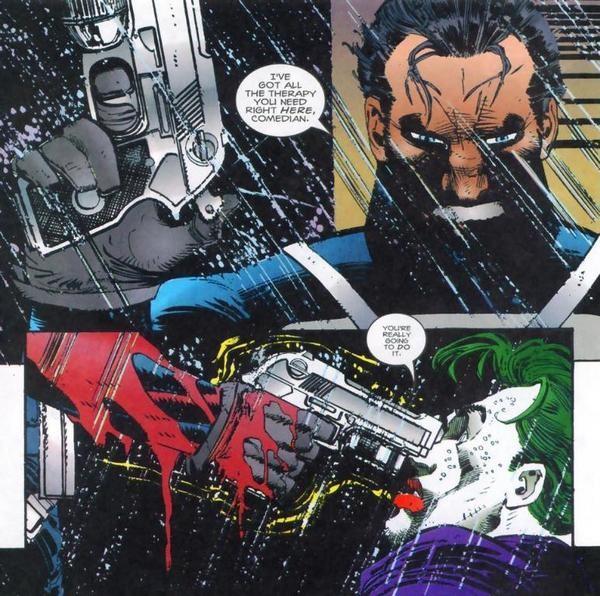 Of course, Batman shows up and stops Frank from airing out the Joker's brainpan, but honestly, the look of pants-soiling fear on the Joker's face when he realizes Frank is about to actually pull the trigger is one of my favorite comic panels of all time.

Believe it or not, Joker has killed himself - several times.
Here are the instances I know of -

Batman: The Dark Knight Returns.
Batman's return after 10 years stimulates The Joker to awaken from catatonia at Arkham Asylum. With renewed purpose, The Joker manipulates his caretakers to allow him onto a television talk show, where he murders everyone with gas and escapes. Batman and Robin track him to a county fair, where he is already killing people. Batman defeats The Joker in a violent confrontation, nearly killing him. To incriminate Batman for murder, The Joker snaps his own neck and dies.

Batman Arkham City (Video Game)
Joker is struck with a deadly poison and Batman brings him the cure, but Joker himself breaks the vial carrying the cure in a hurry and that causes his death.

In 'Batman: Under the Hood', Jason Todd, as Red Hood, beats the Joker to a pulp and then kidnaps him, with the explicit intention of executing him. As I recall, Batman stops him from killing Joker, but it has been a while since I read it. Either way, the attempt is made, with a conversation about why Batman does not kill being a central point of debate.

For what it's worth, in the [excellent] one-shot 'Devil's Workshop', Joker is killed by Batman and Harry Houdini at the end of the book.

Tommy Monaghan accepts a contract on The Joker in "Batman Chronicles #4" and attempts the hit in Arkham Asylum in "Hitman #1–3". If I recall correctly, he's stopped by Batman, but it also turns out that the whole thing is a setup by the demonic Arkanonne, the Lord of the Guns, and their agent, the Mawzir, who want Tommy to work for them.

In my early teens someone showed me a book- the Encyclopedia of Supervillains (have to look up the author); its entry concerning the Joker said he actually got sent to the electric chair, but afterwards some idiot dug up his body and somehow brought him back to life (they shoulda cremated the bastard). However I don't recall if they specified the issue or year it happened.

Back in 1996, in Joker: Devil's Advocate, the Joker is tried for a string of murders, denied the insanity plea, and sentenced to death by electric chair. Batman frees him by proving that despite the Joker undeniably killing hundreds of victims, the ones he was convicted of from the trial were killed by someone else.

The Joker's head was shaved and was moments from being killed before Batman saved him. Somehow this is presented as a big win for Batman.

Not the answer you're looking for? Browse other questions tagged dc the-joker or ask your own question.

-3
Is there a death penalty in Gotham?

7
What animated Batman movie had an old Bruce and young female Robin?
35
Has Batman himself ever taken seriously the idea that he indirectly causes Gotham to have more supervillains?
14
Has anyone ever been subjected to Joker Venom and Fear Gas simultaneously?
11
Does the Joker consider any act of violence to be too wrong?
49
Has Batman ever said he hates the Joker?
10
Would Batman's code of honour preclude him from permanently crippling his enemies?
6
Has Batman ever unintentionally/accidentally killed someone?
5
Why hasn't Batman ever had Superman send the Joker to the Phantom Zone?