How could Darth Vader be a Transformer?

While following my kids in the toys aisle of a big department store, I spotted a strange crossover : Star Wars and Transformers : 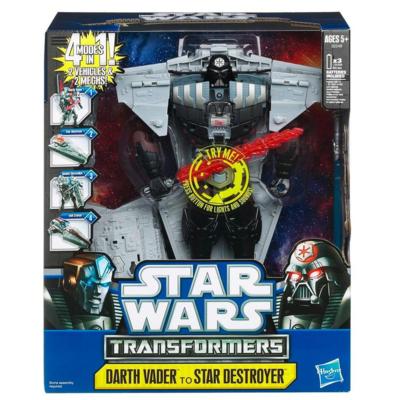 How could it possibly happen? The Transformers's home world wasn't supposed to be in our galaxy, or at least contemporary, and Star Wars "A long time ago in a galaxy far, far away...."?

Is there any explanation on how the 2 universes could merge or it is just a thoughtless commercial combination?

Is there any explanation on how the 2 universes could merge or it is just a thoughtless commercial combination?

For the most part, yes, in 2008 Hasbro launched the Transformers Crossovers line; this was purely for commercial gain, and it was never done with any intent of defining canon.

How could it possibly happen?

Parallel/alternate universes and bridges between them are always a good explanation for these types of things.

a mysterious and malevolent realm that exists beyond the plane of "normal" space.

That said, it's safe to say that alternate universes do exist in the realm of the Transformers universe(s), and it's only through that could that universe and the Star Wars universe collide.

Now whether or not that actually did happen or supports this toy's existence is a separate question.

Basically, it could and it's not outside the realm of possibility but not currently supported in canon from either fictional universe.

Not the answer you're looking for? Browse other questions tagged star-wars transformers or ask your own question.

73
Who created the first Transformer?
8
Was it ever explained how Starscream could return as a Transformer ghost?
41
What and how does Darth Vader see?
7
How fast can a Transformer run?
47
Is there an in-universe explanation given to the senior Imperial Navy Officers as to why Darth Vader serves Emperor Palpatine?