I've been looking to find the title of this horror movie for years. Here's what I know:

A family living in a large house decides to install a helper robot. It lives from the ceiling and moves around on some sort of track system. Something happens and the robot turns evil. I remember one scene, when the robot is starting to get really evil, and the woman dropped her ring (I believe) in the garbage disposal. She almost got her hand taken off, because the robot turned it on.

It originated in the 1990's, possibly late late 80's. It was aired multiple times.

Could it possibly be "Demon Seed" (1977)? It's about an artificial intelligence named Proteus that escapes the lab and gets into it's creator's computer-controlled house, where it keeps his wife prisoner. It uses a variety of robot arms that run on tracks to manipulate items. I don't recall a ring scene offhand, but it fits the tone of the movie. It was shown frequently on tv in the 90's.

Homewrecker (1991) is another possibility, with a very similar plotline, although in this movie the AI is "female" and falls in love with the male programmer. 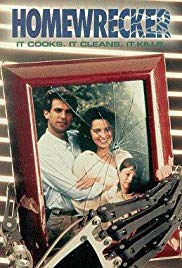 A scientist reprograms his computer with the personality of a woman and names it "Lucy." When the scientist gets back together with his estranged wife, Lucy, who has fallen in love with him, tries to kill the woman.

Until the movie gets taken down, a link to a part where it moves on the track:

The only answer I can think of is, "The Invaders," from a 60's episode of the Twilight Zone. Not to be confused with the TV series The Invaders. Agnes Moorhead(Samantha's mom from Bewitched) is an old woman living in a house. She hears strange sounds outside and hears a noise on the roof. In a few more minutes she see's this tiny robot about 6-8 inches tall. She attacks it and then they attack her with some kind of laser weapon, it barely phases her. Eventually she kills all the robots but one. Then she goes outside with an ax and destroys the spaceship(about 4 or 5 feet across in size). While she's hacking away at the ship she hears a voice that says the giants are too powerful don't send anymore expeditions or something like that. The camera slowly pans to the side of the spaceship and it reads U.S. Air Force Space Probe 1. Neat. Then the show ends. I know that's not it but that is a great episode of classic Twilight Zone and I just wanted to mention it.

Not the answer you're looking for? Browse other questions tagged story-identification movie horror robots or ask your own question.

6
House computer with AI takes over home, tries to procreate with woman

7
Sci-Fi/Horror movie possessing robot with long neck
6
Natural-born woman gets revenge on gene-enhanced people
1
Trying to identify zombie movie from 80's or 90's
4
What is the name of this horror movie with ceiling crawling monsters?
17
Monkey Wife story
9
Horror movie which takes place in an old house with a girl with powers.
7
Horror ghost movie with people trapped in a house
4
90s B-rated horror movie with a haunted house