This is a sci-fi short story which ends with the protagonist growing roots on his feet and sinking them into soil, finding peace.

Thought it was Bradbury/Martian Chronicles, but seems not.

Pretty sure it was 70s or 80s, and in an anthology. I would have bet money it was Bradbury but I can't find it in his bibliography. The character gradually slows down and I think stops eating, coming to a point where he finally stops and puts his bare feet on the soil and then roots go down into the soil and he feels peace, turned to the sun.

Anyone know the title of a sci-fi short story

"Whatever Became of the McGowans?", a novelette by Michael G. Coney, first published in Galaxy Magazine, May 1970, available at the Internet Archive.

which ends with the protagonist growing roots on his feet and sinking them into soil, finding peace.

At last the tendrils on his feet probed moisture below the surface and the fluid rose into his body, satisfying a craving that had possessed him for days. Once again contentment stole through his senses and he felt his heart slow until it became an occasional spasmodic flicker.

However it doesn't end there: the man and his family end up in a hospital on Earth:

"I'm glad to see you're awake. Now, first of all, I want you to know that your wife and child are all right. You are in the Earth Rehabilitation Center and I am talking to you through this machine because for the time being you will not understand normal speech. My name is Dr. Svenson and from time to time I sit beside you—on the chair you will see beside your bed."

If it was in English, it must have been World's Best Science Fiction 1971, edited by Donald A. Wollheim and Terry Carr.

The character gradually slows down

Yes, it happens gradually. In the beginning:

"Richard, what on Earth are you doing?"

Sandra was standing at the barn door, her brown hair a halo in the sunlight. But her expression was ominous.

"Just seeing to the harvester. What's the trouble?"

"Do you know what the time is?"

"It's past two, we haven't had lunch. What have you been doing?"

Bewildered, Richard shoved up his sleeve with the back of his hand to keep the oil from his sweater. He studied his watch. She was right. Its hands stood at two-fifteen. Had he fallen asleep, dozed, daydreamed, idled between chores? He couldn't remember doing so.

Richard saw the chair and saw also that it was in almost constant jiggling motion. From time to time he thought he could make out a sitting, semi-transparent figure.

"I can't see you properly," Richard addressed the phantom.

A slow fear was beginning to flow through him, driving away his lethargy.

"That is because I am not always here," replied the tape recorder. "Time has accelerated for you. When you spoke I had time to replay your remark at high speed, then record my reply and play it back to you at reduced speed—but I don't suppose you noticed any time lag."

and I think stops eating

He wandered back indoors. The tray was on the kitchen table, where he had left it. How long was it since he had last eaten?

Three days? Four? He couldn't remember. The time lapse bothered him. Deciding that he would in any event, have a good substantial supper later tonight, he drank the remains of his glass of home-made wine, then followed it with a glass of cold water. Presently, he began to feel hungry, just a little.

In another comment you said that this asker seemed to be looking for the same story. A couple of points from that other query:

Some time back in the 80s I read a SF short where humans were colonizing a new planet.

Yes, the planet is called Jade:

Several hundred other customers of the Jade Exploitation Company were, he believed, scattered among the valleys and along the coast of the planet's only continent. Not that their presence made much difference—the distances separating homesteads made visiting impractical. Each settler had his own place to look after.

I seem to recall that some folks had started to disappear, and there may have been an investigation.

Yes, the colonists on the neighboring farm, the McGowans of the title, had gone missing:

The wire fence dividing his spread from the McGowans was down. The stainless thread trailed a random silvery path through the grass. As the McGowans were no longer around he hadn't bothered to repair the barrier and noticed, with a pleasurable thrill of dishonesty, that the grass grew even better on the other side. At harvesting time he would reap their grass as well as his own and profit by the proceeds—it would save the crop's going to waste. If the McGowans ever came back he could always pay them for it, less a deduction for labor.

In front of the McGowan household a small clump of trees provided a cool and tempting patch of shade. He sat down, his back against the largest bale, and regarded the house. It was bigger than his own and in a good state of repair, despite at least two years' disuse.

Could this be Piper in the Woods by Philip K. Dick? You can read the story online here.

Harris opened the door and the Commander went out into the hall. Harris closed the door after him and then went back across the room. He looked out the window for a moment, his hands in his pockets.

It was becoming evening, the air was turning cool. The sun was just setting as he watched, disappearing behind the buildings of the city surrounding the hospital. He watched it go down.

Then he went over to his two suitcases. He was tired, very tired from his trip. A great weariness was beginning to descend over him. There were so many things to do, so terribly many. How could he hope to do them all? Back to the asteroid. And then what?

He yawned, his eyes closing. How sleepy he was! He looked over at the bed. Then he sat down on the edge of it and took his shoes off. So much to do, the next day.

He put his shoes in the corner of the room. Then he bent over, unsnapping one of the suitcases. He opened the suitcase. From it he took a bulging gunnysack. Carefully, he emptied the contents of the sack out on the floor. Dirt, rich soft dirt. Dirt he had collected during his last hours there, dirt he had carefully gathered up.

When the dirt was spread out on the floor he sat down in the middle of it. He stretched himself out, leaning back. When he was fully comfortable he folded his hands across his chest and closed his eyes. So much work to do—But later on, of course. Tomorrow. How warm the dirt was....

He was sound asleep in a moment.

Could this be "I, Tree" by Melvin C. Duncan? You can read the full (short) story online here:

Years passed. The sprout became a sapling, growing tall enough to put its leaves above the weeds the overran the hilltop. The young sapling became a small tree in time. It began to spread its branches to the sun.

"How did I get here?" The tree asked. "This can’t be! I’m a man! I can’t stand here on this hill with my feet buried in the dirt! I must go to the valley and find my ship and my companions."

"Your companions have long since turned to dust." The tree whispered.

"I must go to them." The man part of the tree shouted.

"You are me. I am you. We shall stand here on the crest of this hill for eternity and watch over our valley. We shall watch beings come and go. We shall stand while they mate under our boughs. So it has always been and so it shall always be." The tree whispered.

Try as he may, the man part of the tree could not move. After many centuries he settled down to be a tree. In time they merged and became one.

Found it: the story is called "Dendrocacalia" and it appears in Beyond the Curve.

I am looking for something similar (to re-read).

It was written by Kobo Abe, and it was in an anthology of stories translated into English. I believe I found out about it from a review (probably WSJ or NYTRoB).

Anyway, in this story, an urban man becomes increasingly distanced from people and disillusioned with society ... and he transforms slowly into a potted plant.

There is a 1995 young reader's book titled "Top Secret" by John Reynolds Gardiner which deals with the topic of the protagonist turning into a plant.

"Despite the disapproval of his parents and his formidable science teacher, nine-year-old Allen determines to do his science project on human photosynthesis."

It's a silly story but memorable if you happened to read it as a child. I seem to recall the main character digging his feet into the ground and enjoying "rooting."

I no longer have a copy, so cannot check to see if I'm right, but I believe the story you are talking about may be The Fear Planet by Robert Bloch, which was collected in a couple of anthologies, but the one I remember it from is Alien Worlds (ed Roger Elwood) published in 1964 and reprinted a few times throughout the 1960s: 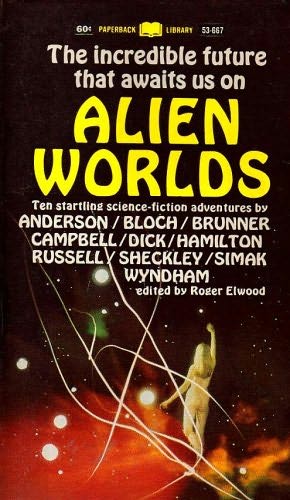 I can't find a useful description of the story online, although there's a comic book adaptation available, but I'm not sure how faithful to the original it is (I remember, as described in the question, that the main character simply slowed down and stopped, rather than becoming a plant-zombie as shown in the comic...).

Jack Vance's "Maske: Thaery" has a man becoming a plant, but it's a punishment imposed on him.

16
Short story: man rescues alien from cruel hanging ceremony, but alien turns into a shrub
7
What is the title of a short story about boy who becomes a tree?
4
Story about a man who chose to be transformed to a plant