What is the car Cruella DeVil drives in the TV series Once Upon a Time?

In OUaT, Cruella appears as a live-action recreation of her 101 Dalmatians cartoon character, complete with car. The car appearing in OUaT shares some styling cues with the Panther De Ville appearing in the live action movie, but it is a distinctly different vehicle. My question is: what is it? The pastiche of design features doesn't appear to match up to any manufactured vehicle, past or present. Apparently a custom creation for the TV show, but what was it built from, and what does it borrow from?

In an interview with Access Hollywood, Victoria Smurfit (who portrays Cruella De Vil in Once Upon a Time), reveals that the car is a Zimmer Golden Spirit:

Victoria's Cruella is now showing off the whole striking, high-fashion package, as well as her slightly minimized haughtiness (she's trying to convince Regina and the gang she's changed) as she motors from street to street in a Zimmer Golden Spirit.

This is a picture of the car from the show: 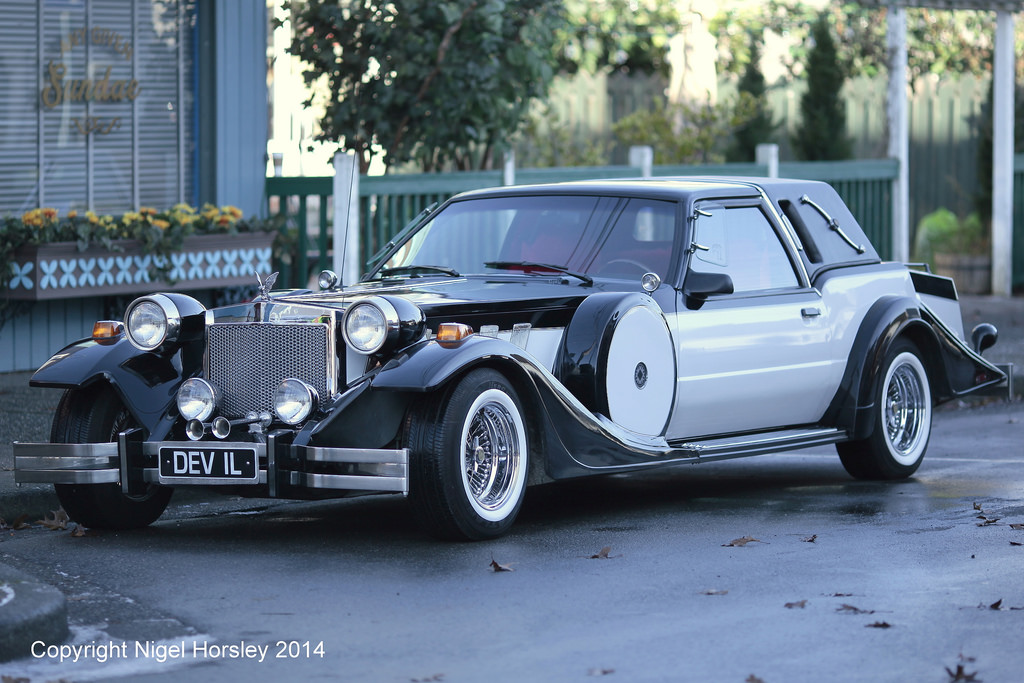 And this is a 1985 Zimmer Golden Spirit, as posted on a classic car retailer's website: 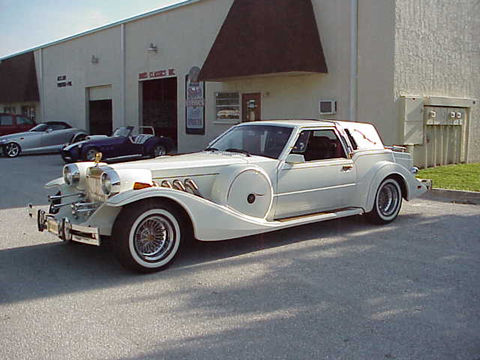 Although it's obviously had some work done (especially on the front), the two cars look largely identical in the body.

There's a thread from a model car forum that discusses some of the modifications made to the car:

Ace-Garageguy: The car from "Once Upon a Time" is a Zimmer Golden Spirit coupe. Looks like about a mid-1980's version with a few kustom touches, including the ultra-superfly side-pipes removed from the hood, and somewhat more "tasteful" chrome louvers added instead.

Look closer. It's a Zaiker, not a Zimmer Golden Spirit. A web search reveals very few were made in the late 80s and/or early 90s using Ford Mustang as the donor car. These are called "neoclassic cars" and there were numerous different neoclassical makes and models built in the 70s and 80s. Sort of the "retrorods" of that era such as the fiberglass muscle car bodies of today mounted over modern interiors, chassis, drive-trains, etc.

The most obvious difference between the Zaiker and the Zimmer is the grille. The Zaiker grille looks as though it came from a mid to late 70s Lincoln. The Golden Spirit grille looks as though it's its own grille. Also note the curvature of the hood tops and edges on the two cars to accommodate their respective grilles. The Zaiker more closely matches the car's flatter hood in "Once Upon a Time" over the slightly curved-hooded Zimmer. The headlight buckets on the Zimmer have sort of a wedged taper at the rear contour while the Zaiker and OUaT headlight buckets have a bullet-like rear contour. The front fenders are a little more squarish on the Zaiker and the OUaT car versus the Golden Spirit. Notice how the tops of the Zimmer fenders have more curve than the tops of the Zaiker and the OUaT fenders. Also compare the front fender inboard contours that flank the grille. Look closely at the bottom contours and crease lines of the fenders around the wheel wells on all three cars. Look and compare these same details around the rear wheel well too. There is a noticeable body line that wraps the lower front section of the rear wheel fender flare on the Zaiker and UOaT car. The Zimmer does not have this line. Also, the fake sidepipes aren't on the Zaiker just as they aren't on the "Once Upon a Time" car. While the pipes could have possibly been removed from a Zimmer, it is unlikely that anyone would justify modifying the curvature of the fiberglass from the way it came on the Golden Spirit to the way it is on the "Once Upon a Time" car. Both cars used Ford Mustangs as the donor car and while Zimmer Golden Spirit is a good guess, closer examination of the few online Zaiker photos reveal the Zaiker is more likely the answer. Even the logo is almost identical. They both start with the letter 'Z.' There is one close-up photo on the web of the Zaiker logo that shows how similar it is to the Zimmer logo. It's possible the Zaiker builder used some of the molds or attempted to closely replicate what Zimmer had churned out in the 80s.

With all the copyrights, I'm hesitant to post other people's pictures here so if you conduct a web image search using the words "Zaiker" and "car" and other similar keywords, you will find about 12 pictures or so of about four different Zaikers. Then compare those with the OUaT car and Zimmer Golden Spirit pictures. There's even more differences than I've pointed out between the Zimmer and the OUaT car but I'm hoping I've given enough that will lead you to discover the other details on your own. This is why I believe the OUaT car is a Zaiker which is a neoclassic car built on a Mustang.

There's only one Zimmer Golden Spirit in this grouping and the rest are Zaikers:

The chassis is definitely a fox body mustang (87-93). Most likely a notch-back LX model. Heavily modified to look like the zimmer. Having owned a few mustangs for over a decade the a-pillar, side mirror, door handle, and door are mustang. But the interior is a dead giveaway especially that arm rest.

MarioMario
1
Add a comment  |
Highly active question. Earn 10 reputation (not counting the association bonus) in order to answer this question. The reputation requirement helps protect this question from spam and non-answer activity.