I watched this movie only once, and I didn't see the whole thing. It was in English — it was not translated from other language, but it could be American, British, Australian, anything. I saw it on a local cable channel.

The notable features were:

The Breed was released in 2006 but otherwise could fit.

ii. a group of people in a pacific island (not the storyline of LOST), the people might have come by their own will and were possibly unable to leave (not exactly sure about this)

Five friends go to an island by seaplane for a holiday. Later, when they try to leave, the seaplane is surrounded and they can't reach it.

iii. The island is infested by swarms of dog like monsters. Literally swarms, by the hundreds and thousands. The animals are not a result of any scientific research or experiment.

The characters are constantly under attack by vicious dogs.

iv. There are world war II era Japanese bunkers and machine gun weapons which the survivors use. There are even Japanese army records of the creatures and possibly the japanese WWII base was destroyed / left in ruin by the creatures.#

The characters discover an old army base used to breed attack dogs.

The Pack was released in 1977 and also features the island + vicious dogs combination, but has no army base that I know of.

I think you're referring to the remake of The Island of Dr Moreau.

ii. a group of people in a pacific island (not the storyline of LOST), the people might have come by their own will and were possibly unable to leave (not exactly sure about this)

Edward Douglas (David Thewlis) survives a plane crash in the Java Sea and is eventually rescued by a passing boat.

Douglas tries to escape by boat, but finds it overrun with rat-like creatures and gives up.

iii. the island is infested by swarms of dog like monsters

There are multiple hybrid monsters. Some of them are dog-like. 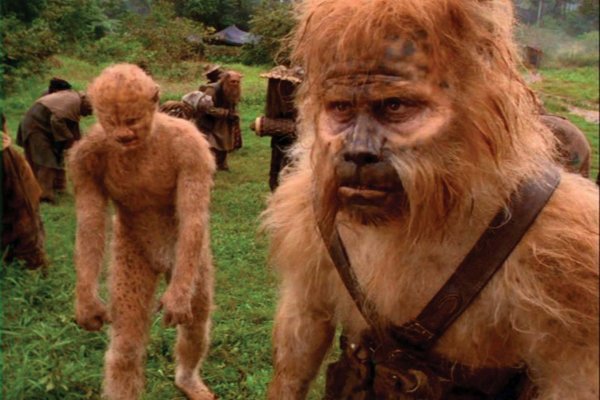 iv. there are world war II era japanese bunkers and machine gun weapons which the survivors use.

The labs look more modern, but the above-ground settings look very WW2 era. There are guards with guns, as you can see in the trailer below.

It might be The Lost Tribe (review), a 2010 remake of the 2009 film variously titled After Dusk They Come, The Tribe, and The Forgotten Ones.

While on their way to Asia to close a business deal, five friends (Anna, Tom, Joe, Alexis, and Chris) rescue a man that's been left to drift at sea. Injured and in shock, the stranger overrides the yacht's autopilot and attempts to change the vessel's course, but instead wrecks the boat on a rock and the vessel sinks. The castaways wash ashore on the beach of an uncharted island and attempt to contact the Coast Guard over the yacht's radio. Before the Coast Guard can arrive, the body of the stranger vanishes from the grave the other survivors had laid him to rest in. Needing some time to himself, Tom wanders into the jungle and is attacked by an unseen assailant. During the attempt to find Tom the next day Alexis is killed by the jungle's inhabitants and Chris is taken. Joe and Anna discover a nefarious plot by the Vatican to cover up a research team's discoveries on the island before Joe is murdered by an assassin sent by the Catholic Church. Anna is then left by herself to survive on the island and uncover its secrets.