How does Xavier get the use of his legs back after “X-Men: First Class”?

At the end of First Class, Xavier is paralysed, and him and Magneto split paths. However at the beginning of Last Stand, it flashes back 20 years, and you see the grown up Xavier and Magneto, friends, talking to a young Jean Gray.

Did Xavier get the use of his legs back and then lose it again?

Or is this just a continuity error?

I'd say that this is most likely a continuity error, along the lines of Hank McCoy appearing as a human debating with Sebastian Shaw on TV in "X2," Professor X claiming he built Cerebro with Magneto in "X-Men" when it was in fact built by the government and Beast, Mystique's deep connection with Xavier never being mentioned by Xavier or Magneto in the original trilogy, and Emma Frost being a teenager in "X-Men Origins: Wolverine" when she was an adult in "First Class." I take "First Class" as a reboot, not a prequel.

From the comic books, I remember him getting his legs back at least twice. 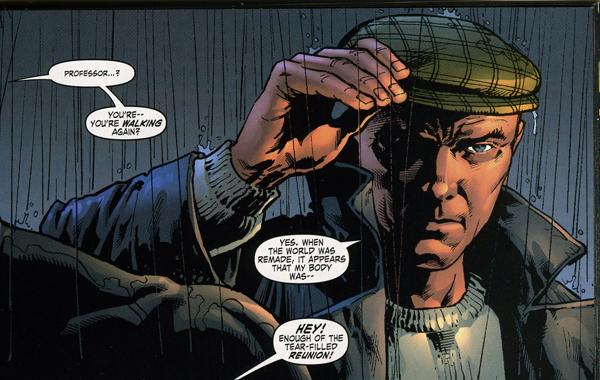 This is from X-Men Deadly Genesis#5

Days of Future Past shows that there is a serum that Xavier and McCoy can use to neutralize their powers, resulting in looking human for McCoy, and walking again for Xavier. But more importantly, the time traveling shenanigans events of DOFP has changed significant parts of the shared timeline of the X-Men movies, including X2 and X3. Notably, Jean and Cyclops are still alive. At this point, we do not know how much of the original trilogy, wolverine origins, or the wolverine have actually occurred as shown.

Well, yes, technnically, what we have here is just a continuity error which, thanks to the timeline having been altered with the intorudction of DoFP, we will never see erased, but with a bit of fanfictioners' trickery, I think it's possible to come up with a fairly plausible answer.

We know that Charles was taking the serum that gave him the ability to walk in 1973. Because he was taking too much of the serum, it stripped him of his psychic abilities. In the DoFP timeline- the altered timeline- Wolverine travels back to the 70's and his involvement effectively ends Charles' addiction to the serum, but in the original timeline, Logan never interacted with Charles in the 70's, so it is concievable that Charles kept on taking the serum well into the 80's. If he lowered his dosage gradually, he would regain hy psychic powers but keep the ability to walk.

As for the fact that he is freind with Erik in the Last Stand flashback; I personally don't think it's very far-fetched that they might have joined forces again temporarily, and then seperated before the events of X-men 1 again, possibly due to their contrary ideals.

It takes place nearly ten years after we see the serum in DOFP so he could have enough time for Charles to make it so Charles can walk and use his powers, but then you could say why doesn’t he walk in xmen well I think his body became immune to it so it stop walking but a a result he remained bald

1
When does Professor X lose his ability to walk?
1
How could Charles Xavier walk in Xmen: The Last Stand?
1
If Xavier kept taking his “medication” in the '70s, how we end up in the prologue scene of X3, acknowledging the events of DoFP?
12
In the X-Men movie franchise, were the third and fourth movie written out of the timeline?

19
Why doesn't Professor Xavier use Wolverine's healing power to fix his legs?
18
Why is Professor X in a wheelchair in X-Men Days of Future Past’s future/present?
0
Do the three X-mansions in the X-Men franchise count as a continuity error?