Comic about a man who constantly decomposes, but can assimilate living creatures to his body

There was a comic I read online a few years ago. It appeared to be newer. I'm not a comic aficionado, but i'd guess it was published between 2000 and 2013.

The story was of a guy (he might've been a king) some 2 to 3 thousand years ago. He was cursed with an affliction that left him decomposing, but he was able to assimilate animal and human body parts onto himself to offset the decomposition. Essentially, he was like a leaky bucket filled with water, and he "filled" the bucket over and over so that it would never be empty (dead), but he was not the same physically after awhile. He also gained insight when taking brains and used his ability to become immortal. The main story was set in modern times. He had been surviving by killing and taking body parts from bad guys, sometimes animals. I remember he took the head of some guard and used the memories to figure out a code combination, or another secret. It also made him really angry, because the guy's head he took was emotionally unstable and was angry all the time.

He was also blown apart once and I believe he survived by attaching one of his scraps to another body.

I think you might be thinking of Marvel comics' the Terror, aka Shreck. He's appeared in a lot of comics, but there was a series that stars him specifically called Terror, Inc.

At some point in the distant past, a tribe of early humans hunted and fought a demon that had been preying upon them. The demon resembled a green bear, with a series of long, thin spikes protruding from its face and along its spine. The man who killed the bear was cursed by victory to assume the demon's form - his skin took on its green, decaying form, and the spikes from its face appeared on his. He gained the beast's ability to merge the limbs of others with his own body, but was shunned by the tribe he had helped to protect. Over the years, he adopted names that reflected people's reaction to him, and by the Dark Ages he had adapted the Germanic "Schreck" (scare, fright) as his name.

Though the body parts bond permanently with Terror, they are still dead tissue and will begin to decay at their natural rate. This gives Terror a distinctive odor, and also forces him to seek a constant supply of replacements.

Here's a summary of issues 1 and 2 of Terror, Inc Volume 2 which seems to match what you read (head of an agent, body reduced to almost nothing):

(Terror#1) - After spending the last 6 months without a case, Terror was hired by alleged government agent Roger Harper (actually a member of the terrorist organization Death Reign) to eliminate Roy Montgomery, the leader of the US government black ops organization Mother, allegedly for being a mole and costing many agents their lives. As Montgomery apparently met with the terrorist group Death Reign, Terror tore off one of Montgomery's agent's heads and replaces his own to help infiltrate them. Terror was discovered and badly shot up before reaching Montgomery when the others saw his metal-encased hand. Terror nonetheless fought past them and confronted Montgomery, who has no idea who Harper is. Sparks, a member of Death Reign, killed Montgomery (framing Terror for the assassination), and then Terror is assaulted anew. Terror used a grenade that took most of his assailants out, but Sparks decapitated him and prepared to dump him in molecular acid.

(Terror#2) - Terror's remains were doused in molecular acid, while Talita's arm was preserved; Terror's remains were then mopped up and flushed down the toilet. After making it into a sewage treatment plant, some of the material was consumed by a frog that Terror then possessed before it was hit by a car and carried into a suburb. After being scraped off the grill and cast into a trash can, the frog escaped, only to be attacked by a cat. Shreck bonded the frog to the cat before taking over the form of a man named Craig (the man who had hit the frog in the first place; he was the abusive boyfriend of the mother of a youth named Derek). Without the stabilizing effect of Talita's arm/soul, Terror was tormented by the pain of his constant decay, which was much faster than normal, and he began to lose it. In addition, Craig's mind (and that of others of whom he had bonded limbs) began to influence his own.

It's a five issue Marvel Max series published in 2007.
Covers: 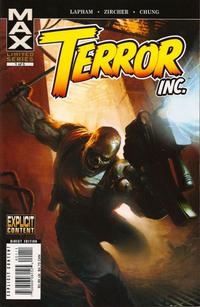 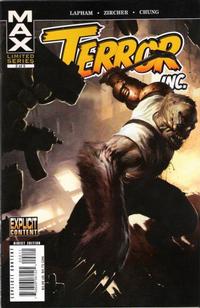 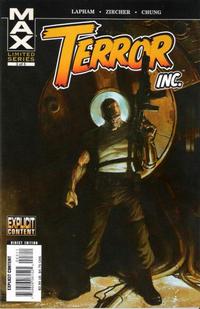 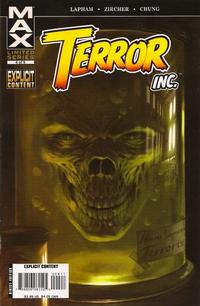 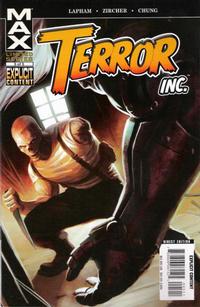 9
Identify series of books about a kid and older man who fight supernatural creatures
21
Short sci-fi story about a man who can make things with his mind
16
Man dies in space but his head is preserved, later reanimated with a robotic body
4
Story about a man who can predict future but commits suicide due to this ability
6
Help me identify an urban fantasy web comic whose main character was named “Resonator”
13
Science fiction novel with forced sex change