How was the Spectre put to Sleep and Woken during Crisis on Infinite Earths?

During the Crisis on Infinite Earths story-line, the heroes travel to the beginning of time in order to stop the Anti-Monitor from creating the multiverse in his image. The heroes stopped the Anti-Monitior (due directly to the actions of the Spectre) and managed to create a singular earth.
However, it is revealed that, in this earth, the Spectre is trapped in a magic "statis field" that is too powerful for magic users to overcome.

What caused the Spectre to enter the magical coma and what aroused him from this state?

The Spectre entered a coma after fighting the Anti-Monitor at the Dawn of Time in Crisis on Infinite Earths #10. He was being assisted by all of Earth's magical protectors but was unable to completely defeat the Anti-Monitor. 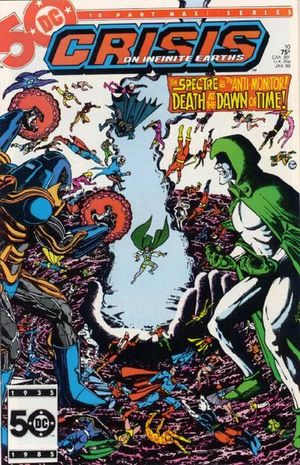 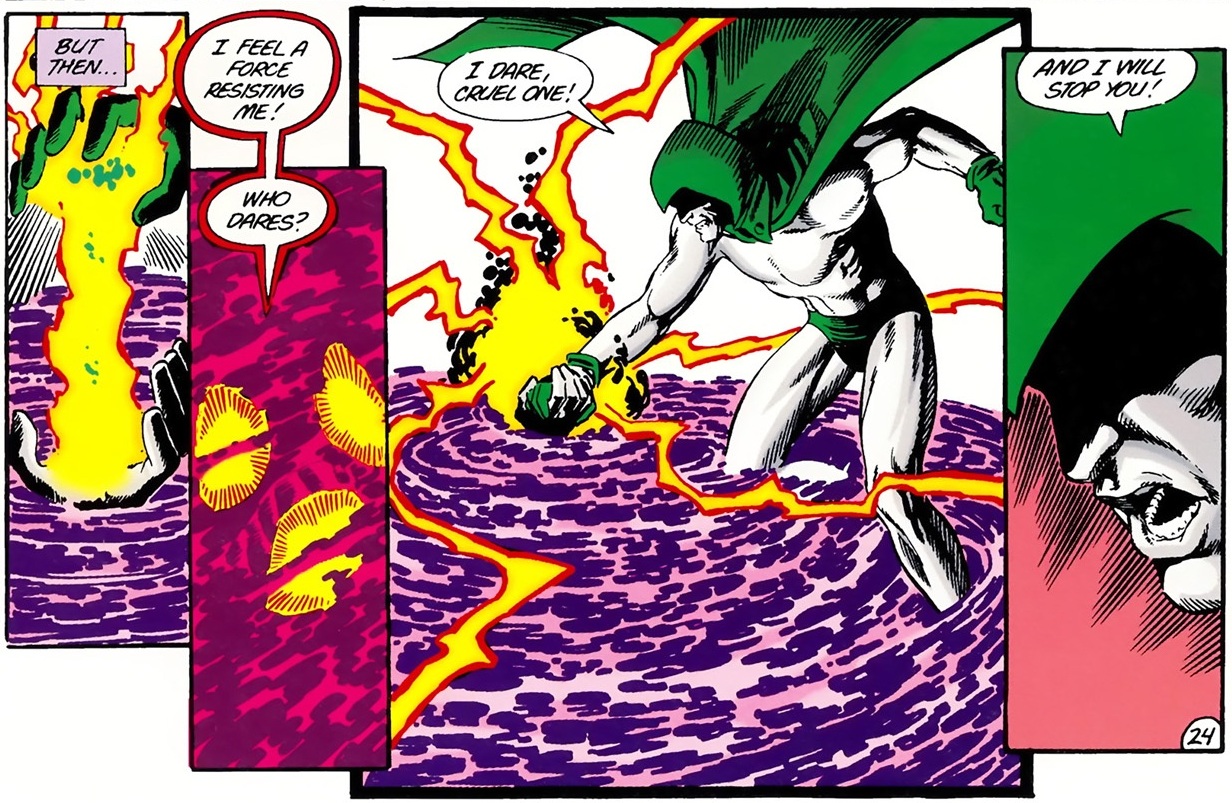 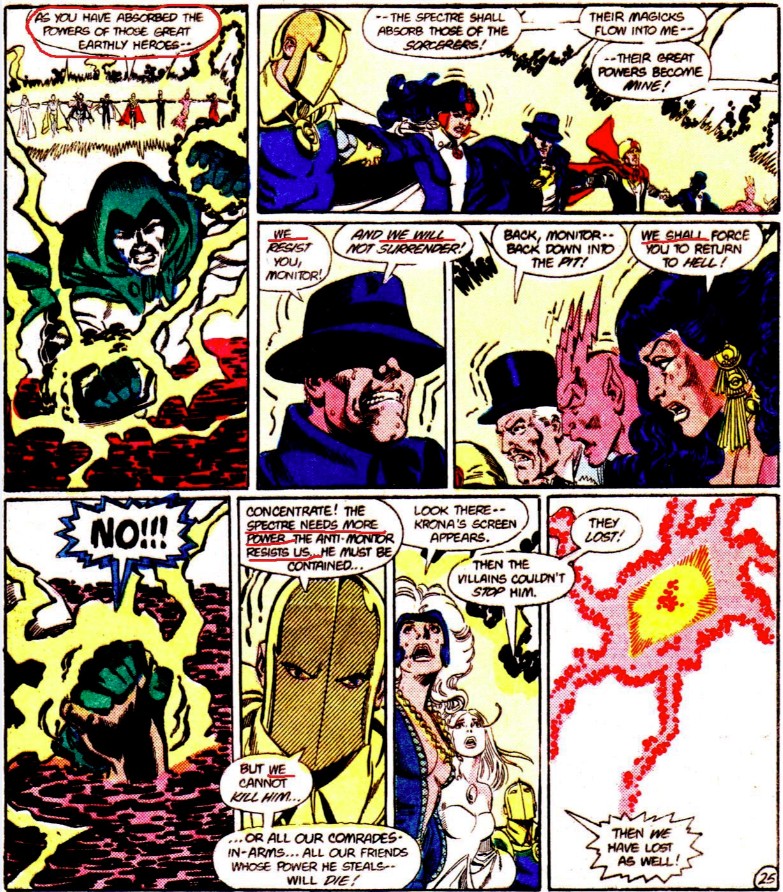 The Spectre appears before the Anti-Monitor, channeling all of the mystical energy of Earth's most powerful sorcerers. He attacks the Anti-Monitor directly and their fight unleashes an explosion of energy, which appears to consume all reality.

The Spectre is later seen in Crisis On Infinite Earths #12 in a comatose state, unable to be roused by Earth's sorcerous elite.

The Spectre, as a character had become quite a problem for the DC Universe because his powers made him almost omnipotent and this became a convenient way of neutralizing the character until the editors could decide a new direction for the character.

Several attempts would be made to destroy the Spectre using the Spear of Destiny, when his power seemed out of control and eventually Jim Corrigan would give up the struggle and retire to Heaven.

The Spear of Destiny was eventually retrieved by a group called the National Interest, who sought to use the Spear to eliminate the Spectre. In the end, the Spectre prevailed, reclaiming the Spear and once more casting it into outer space. In time, Corrigan grew tired, the anger and rage that had kept him going now a burden. He relinquished his role as the Spectre and passed on into Heaven, letting the Spectre Force return whence it came. 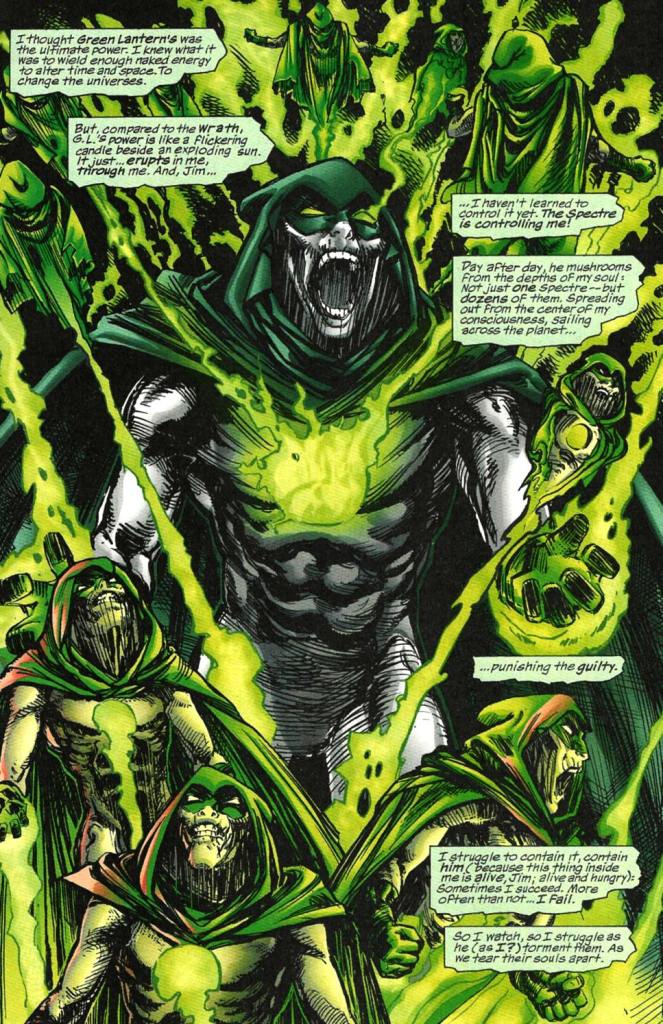 15
How was the Justice League formed?
2
What are the differences between the pre-crisis Superman and the post-crisis Superman?
3
Is Batman: Strange Apparitions part of the post-Crisis Year One main continuity, and if so, why?
6
Why does the multiverse rely on Earth in Justice League: Crisis on Two Earths
0
What shows/episodes are related to the Crisis on Infinite Earths crossover?
3
How did the Justice League survive on the Anti-matter Earth in “JLA: Earth 2” if they're made of ordinary matter?