Can anyone, including Wonder Woman, resist the Lasso of Truth?

This question popped into my head when I was watching The Flashpoint Paradox, in which Colonel Steve Trevor (Wonder Woman's romantic interest outside of the Paradox) gets caught by the Amazons. Wonder Woman slips the lasso around him and asks him who is he, to which he hesitates, groans loudly and says "No". One of the Amazons seems astounded and asks "He's resisting the Lasso of Truth, how is that possible, Queen Diana?" to which she simply replies "It's not". She tightens it around his neck and lifts him up so he's barely touching the ground, and asks him again, and in this instance he says everything without hesitation.

Have there been other instances where people have resisted the lasso? More than once or for prolonged periods? Or is anyone completely impervious to it? Also would it work on Wonder Woman if someone else took it from her?

Recent (Post-Crisis) versions of The Lasso of Truth are connected directly to Diana's own innate abilities & "soul", and therefore do not affect Diana as they would others, presumably because Diana always speaks the truth. The second effect of the Lasso, however - that of being an unbreakable bond - CAN affect Diana if used against her. There have been several occasions - both Pre and Post-Crisis - where Diana was bound using her own lasso and was unable to free herself. One example of this is from Wonder Woman #219 (1975): 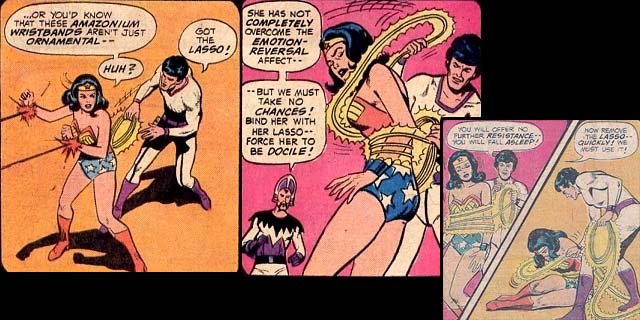 There have also been occasions, though, where Diana was able to break the Lasso when used to bind her, although it's said to require all of her strength. After breaking the Lasso in Superman: Red Son, that universe's version of Diana was mentally affected and never recovered completely.

Others have managed to break the Lasso as well, not purely from strength but from resisting its underlying power. For instance, the Lasso was broken by Bizarro in Trinity because the truth was a foreign concept to the creature. In JLA #62, the villain Rama Khan managed to break the Lasso by telling a truth that Diana refused to believe. The resulting paradox actually altered reality briefly, causing ripples throughout the universe.

Related Question: Has Wonder Woman's lasso of truth ever snapped?

The Gods could resist it, as seen in the Justice League: Unlimited episode "Hawk & Dove " and in Wonder Women new 52.

Those who are insane or simply don't understand the concept of truth are immune.

There is a chance Trevor could've resisted the lasso: tell the truth, but don't answer the question that was asked. That's not a full proof method, but Diana would've lost patience and killed him before he gave her the information she wanted.

To answer your question, The Flashpoint Paradox bothered me specifically because the lasso DID work on SHAZAM when it shouldn't have. Historically, the "Z" in SHAZAM means the "the power of Zeus", which in the past always included SHAZAM being immune to magic attacks. So unless they changed the character (which they may have, since I'm an old timer) there is no way that the power of Zeus should have been overcome by her lasso.

24
Has Wonder Woman's lasso of truth ever snapped?
5
Does the Lasso of Truth compel one to speak the truth or what one "believes" to be the truth?