Are S.H.I.E.L.D. agents (e.g. Clint Barton, Natasha Romanov) ever referred to by their comics aliases?

It's pretty obvious that the characters of Clint Barton and Natasha Romanov in the Marvel Cinematic Universe are playing the characters Hawkeye and Black Widow, respectively. Outside of the movies, fans routinely refer to them as such, and even Marvel talks about a "Black Widow movie".

But, within the films themselves, has anyone ever referred to any of the S.H.I.E.L.D. agents that have comic book nicknames using those aliases? This would include people like:

Similarly, has the name "Black Widow Program" or "Red Room" ever been used to refer to the training program that gave Natasha Romanov her alias in the first place (e.g. when it showed up in Agent Carter)?

NOTE: I know that, in the beginning of The Avengers, Barton is referred to as "the hawk", but I believe this was intended not as a code name, but as a simple moniker, referring to his habit of perching in the rafters. I'm looking for cases where he was identified by name as "Hawkeye".

Some of the comic book codenames have made their way into the MCU; others have been talked about by Marvel execs or similar (so are MCU canon) but haven’t been explicitly mentioned on screen.

“Black Widow” and “Hawkeye” the Avengers

A screencap from the MCU Wiki article from Hawkeye shows a screen that lists both of their comic book codenames: 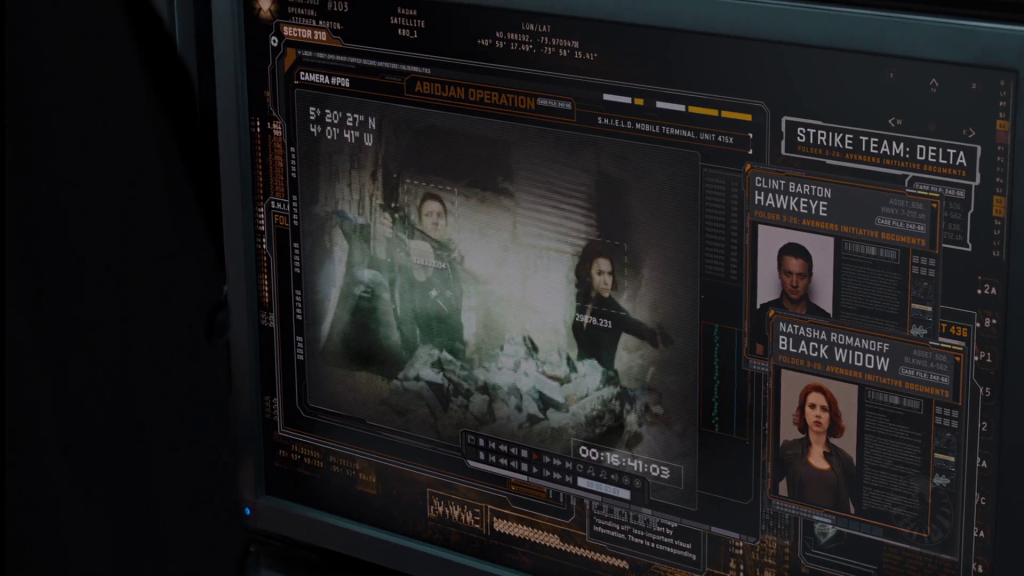 This screen is seen in The Avengers.

Both of these names are also said aloud during the film. As Natasha is piloting the Chitauri craft, she distinctly says “Hawkeye” as she’s being pursued by Loki. (Beginning of this clip on YouTube.) And as Omegacron’s answer notes, Natasha is referred to as Black Widow in her opening interrogation.

An interview with the showrunners of Agent Carter (minor spoilers) seems to confirm that Marvel have the name in mind for the MCU:

As some suspected might be the case, especially given the specific fighting style she used, [this character] is indeed a product of the Black Widow Program – or at least the program that will become Black Widow. Yes, before Natasha Romanoff would prove how formidable she was in the present day of the Marvel films, other women received the same training from Russia.

The “Red Room” was not mentioned in the first season of Agent Carter (which features the only other named Red Room agent, aside from Natasha). However, it is mentioned in Age of Ultron, when Natasha asks somebody “You know what my final test was in the Red Room?”.

I’ve been through the scripts for every episode of Agents of SHIELD that Bobbi Morse has been in; thus far, there has been no mention of her codename. But again, mentioned on Marvel’s website.

In the beginning of The Avengers, the Russian general being interrogated by Romanov explicitly refers to her as "the famous Black Widow".

Russian: Tchalakov is just a bagman, a front. Your outdated information betrays you. So... it turns out the famous Black Widow is just another pretty face.

Other than the "Hawk" reference you mentioned in your question, Barton is never referred to by a codename.

Natasha calls Hawkeye by that name. It's in The Avengers when she's flying on a Chitauri jetski, just before Hawkeye shoots down Loki with an arrow. You can easily miss it.
The conversation goes like this:

Natasha is called Black Widow by the Russian (in Russian) during the interrogation scene.

Black Widow is referred to as "Black Widow" by the HYDRA team during the climactic fight of *Captain America: The Winter Soldier". I don't have access to the movie right now to pinpoint the spot, but I'm pretty sure it's Rumlow who warns others on his radio that she's in the building, and refers to her that way.

Hawk guy is teased about his Hawkeye code name

By his wife at his secret shield provided family farmhouse in Age of Ultron.

8
How/when did Clint Barton and Natasha Romanov become friends?
21
Why are some S.H.I.E.L.D. agents referred to by codenames or numbers?
9
Are the other worlds shown in Agents of S.H.I.E.L.D. episodes "Repairs" and "Laws of Nature" the same?
5
As Goliath, did Clint Barton ever take advantage of his Hawkeye skills?
7
Are there any Asian superheroes in the Marvel comics who have ever had their own solo series, as of 2016?
5
What are the melting and boiling points of adamantium and vibranium? Is this ever stated in the comics?