I'm trying to identify a sci-fi/horror film from the late 70's or 80's. It was live-action and takes place mainly on a spaceship or station. The film is very dark with a vibe similar to Alien (1979). I don't remember the plot (other than people getting killed off one-by-one), but I do remember that the robot/android on the ship was distinctive:

Sorry, I know this isn't much to go on, but that's exactly why I'm having problems finding it.

In the distant future, an overcrowded Earth relies on research conducted by scientists in remote stations across the solar system. One of these, a small experimental hydroponics research station on Saturn's third moon (called Saturn 3), is run solely by Adam (Douglas) and his colleague and lover Alex (Fawcett).

Alex and Adam's idyll is broken by the arrival of Captain Benson (Keitel), who has been sent to Saturn 3 as part of a project to replace at least one of the moon's scientists with a robot. Benson assembles the robot and names him Hector. One of the first of its kind, a "Demigod Series", Hector relies on "pure brain tissue" extracted from human fetuses and programmed using a direct link to Benson's brain. Benson states that it will render one of the crew "obsolete", most likely Major Adam who tells his partner that he is close to "abort time" according to the government on Earth.

Unknown to both Alex and Adam, Benson is a homicidal sociopath who murdered the captain originally assigned to Saturn 3 and took his place on the mission. Benson had actually failed a crucial test of psychological stability.

As Benson uses the link to his brain to program the robot, Hector acquires Benson's homicidal nature and his lust for Alex. 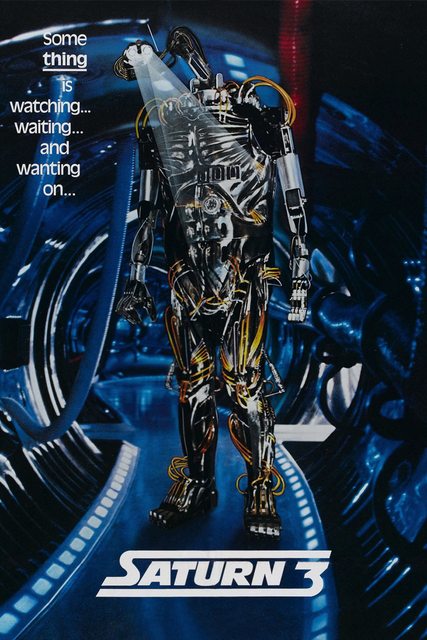 Not the answer you're looking for? Browse other questions tagged story-identification spaceship robots or ask your own question.

5
A 80's comic could be late 70's book I read as a kid
13
Trying to find title of book where a robot has a bomb in it
4
Collection of Illustrated Horror Stories
11
Identify an '80s/'90s animated film from a scene
4
80s era Sci-Fi/Horror film featuring several unrelated stories (not Creepshow)
15
Movie with talking zombies, one zombie eats his own arm
21
Late 90s movie about people disappearing (down drains, I believe)
21
1980s or 1990s film with robots or mechs I watched in my childhood