How does Bruce Wayne mask Batman's injuries between beatings?

OK. We can agree that comic book Batman always gets the bad guy, but sometimes he gets nicked and dinged during the encounter. It's a common thing to see Alfred tending (or trying to tend) his injuries. How does multimillionaire playboy Bruce Wayne protect his secret identity and manage to distract or hide from his business associates and other aquantainces that it frequently appears that his face was smacked by a sack of hammers, or that he can barely move until his broken ribs knit back together? Black eyes can take weeks to go away. Broken ribs take even longer to heal. Split lips heal faster, but with the frequency of Batman's fisticuffs, the chances are that Bruce would have what would appear to be an everlasting fat lip.

Alfred- Master Wayne, you can not appear before the board in this condition.

Bruce- Fine, tell them I took one of my girls to my private island in the Maldives.

Bruce- Tell them it's with a different girl!

This exact question was discussed in Batman Begins (2005). After one of Bruce's first excursions into Gotham as The Batman, he woke up covered in bruises & cuts, which begged the following discussion between he and Alfred:

Wayne glances at the paper. Gets out of bed, bare-chested. Alfred sees BRUISES across his torso and arms.

ALFRED: If those are to be the first of many injuries, it would be wise to find a suitable excuse. Polo, for instance.

ALFRED: Strange injuries, a nonexistent social life... these things beg the question of what, exactly, Bruce Wayne does with his time. And his money.

In short, both Bruce and Alfred have become rather practiced at making up mundane excuses for injuries and absences. On the occasions where an explanation wouldn't work, Bruce simply "disappeared" for whatever reason, with Alfred covering for him.

In Batman vs. Predator, for example, Bruce was forced to spend several days recovering from his first encounter with the Predator. When Batman failed to answer the Bat Signal for several days, Commissioner Gordon began calling the wealthy and influential of Gotham, hoping that one would know about the missing Batman. Alfred explained to Gordon that Bruce had left town until things (the Predator's murders) had calmed down.

He crashed the Porsche and needs surgery. Surprised? 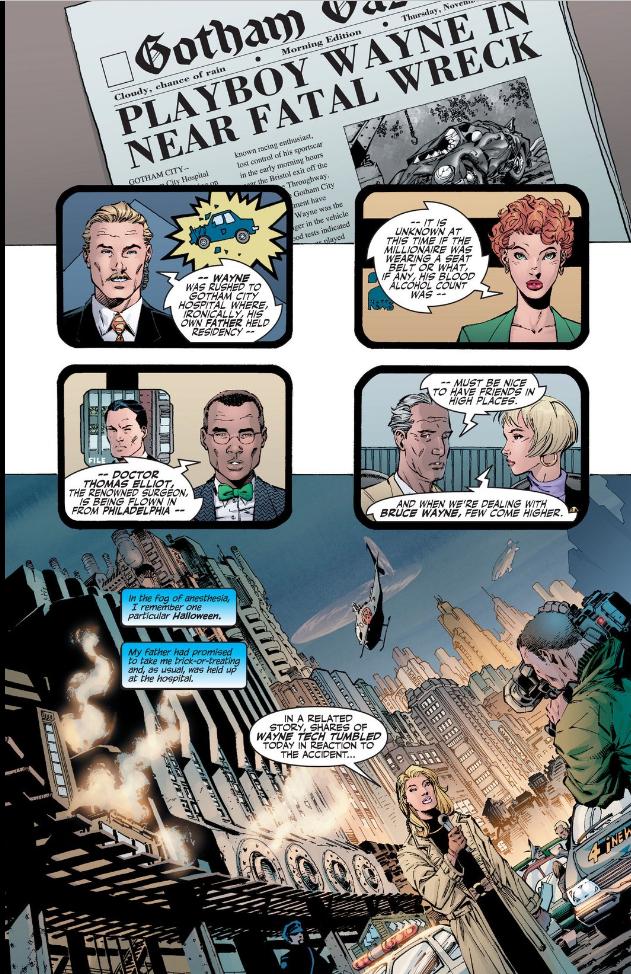 23
Have we ever seen Bruce Wayne getting facial re-constructive surgery?