Short-story about moving "cathedral" cities on a Mercury-like planet

Looking for a particular short-story in an anthology (I don't think it was an entire novel). Set in the future, a planet was colonized by accident that is essentially like Mercury ... too close to a sun to support human life. Two mobile cities were built by the survivors that keep moving across the entire diameter of the planet to stay on the "night-side" of the planet each "day". They follow a trail that includes going up and down switchbacks across mountains and craters. They are not on rails (such as in Kim Stanley Robinson's moving Terminator city on Mercury); they move via wheels or treads or even "feet" (I don't remember which) and the trail has treacherous portions that are key to part of the plot.

The cities are old and badly maintained. Their populaces have lost a lot of their technical knowledge and barely keep the cities operational. I seem to remember the cities are called or considered cathedrals or citadels, and have adopted ritualistic/church-like practices for social order and city maintenance.

And of course, the denizens of the two cities now hate each other, and attempt to disable the competing city from moving ahead of the sunrise. For the plot, the protagonist is attempting to prevent the antagonist from disabling his city, and of course the antagonist is initially successful in disabling the city's movement. With sunrise nearing, the protagonist needs to somehow save the city yet has to deal with the rigid city hierarchy.

I was sure this story was in my personal Sci FI library (over 600 books), but for the life of me I cannot re-find this short-story and its author. It was certainly written before the 2000's but I think it was more recent than "golden-age" 50s and 60s Sci-Fi. It's style might seem like steampunk from what I described, but I read this before the steampunk craze.

There is a useful Wikipedia posting on "Walking Cities" which contains a nice list of fictional stories that involve large moving structures the size of cities. Also two Trope Pages documenting similar stories with literature citations: "Base On Wheels" and "Mercurial Base". I have checked out all the cited stories from all these links, and no joy in finding what I was looking for.

To help ensure I get an actual answer rather than reputation-grabbing answers, since apparently I need to be specific, these stories are NOT the one I'm looking for as I've researched each of them:

There are two stories I am in the process of researching.

I just finished re-reading Absolution Gap by Alastair Reynolds. Its Hela storyline is not exactly what I was trying to locate (I distinctly remember a short story form), but the Cathedrals in Absolution Gap (especially the "walking" Lady Morwenna cathedral) are very similar. In particular, in the short story I'm looking for, the writing describes the Cathedrals going down something similar to the "Devil's Staircase", with one nearly falling off.

However, it got me thinking. Alastair Reynolds has written an extensive number of short stories over the years. Perhaps he had explored the concept of moving "cities" across a small planet or moon in an early short story. Or even an early short story of the Quaiche Cathedrals on Hela set before the timeframe of Absolution Gap, effectively making it a prequel.

So I sent Mr Reynolds an email asking if he had written a short story about the Cathedrals, and he was kind enough to promptly send me a thorough answer:

From: Alastair Reynolds
Sent: Monday, December 07, 2015 7:46 AM
To: Mike
Subject: Re: Prequel short story of the Cathedrals in Absolution Gap?

It's not one of mine, as I've never done a prequel featuring the cathedrals. My first thought was it might be an early Kim Stanley Robinson story called "Mercurial" which features a moving city, but I can't find a detailed synopsis of it and don't have a copy of it to hand to check. I don't think there were two cities in that story, though, just the one, so it's probably not the piece you're thinking of.

I myself have a vague recollection of a story featuring a race between two ice-schooners, which involved a descent down some kind of steep wall, but that's probably something else again.

If you don't mind, I'll put a query out on my Twitter account as there are some very knowledgeable SF readers there.

thanks, and best wishes, Al

Its wonderful that many authors such as Mr. Reynolds take time to interact with their fans, and even take an interest in their inquiries. I'll report back if an actual answer turns up from his three Twitter posts (One Two Three).

Per Alastair Reynold's suggestion (and apparently my comment months ago, which I forgot about), here's Mercurial, Kim Stanley Robinson's 1983 short story. It was contained within a collection/anthology called The Planet on the Table.

It is on Mercury (so not Mercury-like, actually Mercury), set in cities that travel on a specific course:

Terminator’s tracks lie very close to the thirtieth degree of Latitude, in the Northern hemisphere, and Monet Crater is not far from them. We crossed Shakespeare Planitia rapidly, passing between craters named after the great artists, writers, and composers of Earth’s glorious past: traversing a low pass between Brahms and Verdi, looking down at where Degas had crashed into the Brontës. “I think I understand why a modern artist on Mercury might turn to forgery,” Freya said. “We are dwarfed by the past as we are by this landscape.”

Half an hour later we had Terminator’s tracks in sight. They stretched before us from horizon to horizon, twelve fat silvery cylinders set five meters above the ground on narrow pylons.

There's also several mentions of the word "Cathedral", but that's because the plot of the story revolves around cathedral artwork painted by Monet:

“Well,” I muttered, “you may have destroyed all my faith in you, and damaged Mercury’s art heritage forever, but at least I’ll get a good story out of it.” This was some small comfort. “I believe I’ll call it ‘The Case of the Thirty-third Cathedral of Rouen.’ ”

There are enough elements in this story that perhaps it could have been confused/combined with other stories.

Kim Stanley Robinson also wrote a short story titled "Mercurial" that was included in two anthologies: The Planet on the Table 1986 and Vinland The Dream And Other Stories. However, there's no clear synopsis of this short story. It, like the new "2312" (and the Mars trilogy) seems to be about just one moving city, not multiple.– CreationEdge Mar 17 at 4:05

I just started reading Robinson's 2312 and thought the premise of a moving city came from a much earlier work....an hour of looking at my old books... reading the entire list of Ace doubles (wrong) and then finally guessing the name, I finally found the one I was thinking of, Kenneth Bulmer's Roller Coaster World, is this the same as your question?

There's a dying world where moving cities seek out areas of radiation to harvest, and the book cover shows a large domed city on tank like treads. 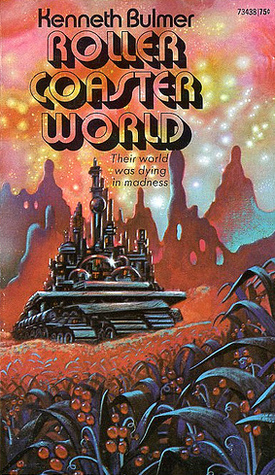 Parsloe's Planet was in its death throes. A world of mobile cities, the populace had moved frantically from radiation site to radiation site - for without this life-giving radiation the inevitable result would be insanity and death.

Now the radiation was failing. Soon it would be no more. The planet was going to die.

But into the chaos and agony of the dying planet comes Douglas Marsden: an outcast, a renegade - and the only man who can save the stricken world.

Could this be Strength of Stones by Greg Bear? It was his second published novel, out of print now but should be easy to find on amazon. If I'm not wrong it was assembled from a series of short stories and the novel has lots of changes. Don't recall a race against sunrise but it does feature a battle to take over the city and I think there is a tribe who workshop the cities as a god. It does seem a popular subject, was there a moving city in one the Edgar Rice Burroughs Mars stories too?

Not the answer you're looking for? Browse other questions tagged story-identification short-stories novel or ask your own question.

360
Story where the number 3 is the monster?

117
Story where scientist communicates with cities directly
8
Collection of youth short stories about aliens 1990-1994ish
4
Ghosts of the dead
12
Looking for short stories differing from two Spider Robinson collections, from "Melancholy Elephants" to "By Any Other Name"
5
id sci-fi short story, lovers time travel together in a city apartment
13
Short story(-ies?) set in a world where energy is stored in animal-loaded springs, cultures controlled by big companies