This is a question concerning details. I read in an encyclopedia concerning "monsters " that Mary Shelly was inspired by a real life scientific experiment. They ran massive amounts of electricity into the dead body of a frog, it obviously didn't come back from the dead, but its muscles did spasm. The encyclopedia never cited this. I am very interested in: who did it, when, and where.

The experiment was done by Italian physician and physicist Luigi Galvani while he was working at University of Bologna. The experiment was a result of Galvani's interest in Medical Electricity, on November 6, 1787.

To quote from the wikipedia article--

The beginning of Galvani's experiments with bioelectricity has a popular legend which says that Galvani was slowly skinning a frog at a table where he had been conducting experiments with static electricity by rubbing frog skin. Galvani's assistant touched an exposed sciatic nerve of the frog with a metal scalpel that had picked up a charge. At that moment, they saw sparks and the dead frog's leg kicked as if in life. The observation made Galvani the first investigator to appreciate the relationship between electricity and animation — or life. This finding provided the basis for the new understanding that the impetus behind muscle movement was electrical energy carried by a liquid (ions), and not air or fluid as in earlier balloonist theories. 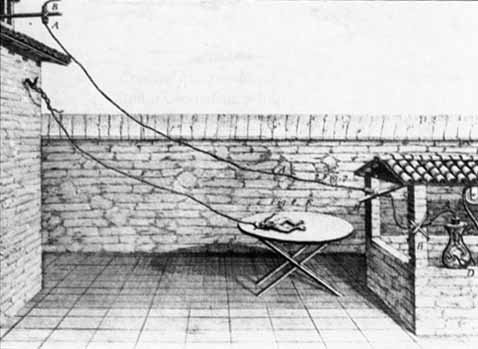 Further details of Galvani's experiment can be referenced from the book "A History of Electrocardiography" available at Google Books.

This was an experiment done by Luigi Galvani in 1781, discussed in this article:

On January 26, 1781, while dissecting a frog near a static electricity machine, Galvani's assistant touched a scalpel to a nerve in its leg, and the frog's leg jumped. Galvani repeated this and several other experiments, observing the same violent muscle spasms. He also noticed that frog legs occasionally twitched when they were hung from a brass hook and allowed to touch an iron trellis, so Galvani joined a length of each metal together to form a brass and iron arc that made the leg muscles contract when touched.

But where did the electricity come from?

Galvani, who called it "animal electricity," believed it resided in the frog itself.

One of Galvani's earliest readers was Italian physicist Alessandro Volta. Volta already had earned an imposing reputation as the discoverer of electrical capacitance, potential, and charge, and also discovered and was the first to isolate methane gas. He replicated Galvani's experiments and helped popularize his work.

Yet Volta reached very different conclusions. He believed the electricity came from the two metals used in the arc, and that the frog was acting as the conductor. Within the year, he replaced the frog's leg with brine-soaked paper, detected a current, and challenged Galvani.

So how did this influence a young Mary Shelly and lead her to compose one of the most widely read novels of all time, "Frankenstein; or, The Modern Prometheus"?

Galvani's nephew, Giovanni Aldini, was a fierce partisan of animal electricity, yet he did not ignore Volta's pile. Aldini used it to tour the capitals of Europe and demonstrate the medical benefits of electricity -- or not. His demonstrations involved jolting corpses with electricity and making decapitated criminals sit upright.

Aldini's most famous exhibition took place in 1803 at the Newgate Prison in London, U.K. He inserted metal rods into the mouth and ear of the recently executed corpse of murderer George Foster. "The Newgate Calendar," a book about the criminals of Newgate Prison, described what happened next: "On the first application of the process to the face, the jaws of the deceased criminal began to quiver, and the adjoining muscles were horribly contorted, and one eye was actually opened. In the subsequent part of the process the right hand was raised and clenched, and the legs and thighs were set in motion."

Not surprisingly, some observers thought Aldini was bringing Foster back to life.

Mary Shelley knew all about Galvani, Volta and Aldini. Humphry Davy and William Nicholson -- the era's leading electrical researchers -- were friends of her father. In 1816, at age 19, she spent the summer in Geneva, Switzerland with Lord Byron and her future husband, Percy Shelley. The season was cold and rainy, and they spent many evenings around the fire, reading German ghost stories and discussing electricity's potential to reanimate corpses.

It must have seemed like she was merely peering into the near future to imagine that one day, a Victor Frankenstein might succeed in reanimating an assembly of body parts.

As mentioned on p. 72 of Shocking Frogs: Galvani, Volta, and the Electric Origins of Neuroscience, the laboratory was in his home in Bologna:

The possibility of carrying out the experiments at any time he could spare from his professional duties may have played a role in his decision to establish a laboratory in his house, instead of using the facilities offered by the equipment hosted in the rooms of the Institute. ... A home laboratory was not infrequent in eighteenth-century Bologna.

There's a contemporary illustration of his laboratory on p. 73 (likewise viewable in the google books link above), and another schematic illustration can be found on this page: 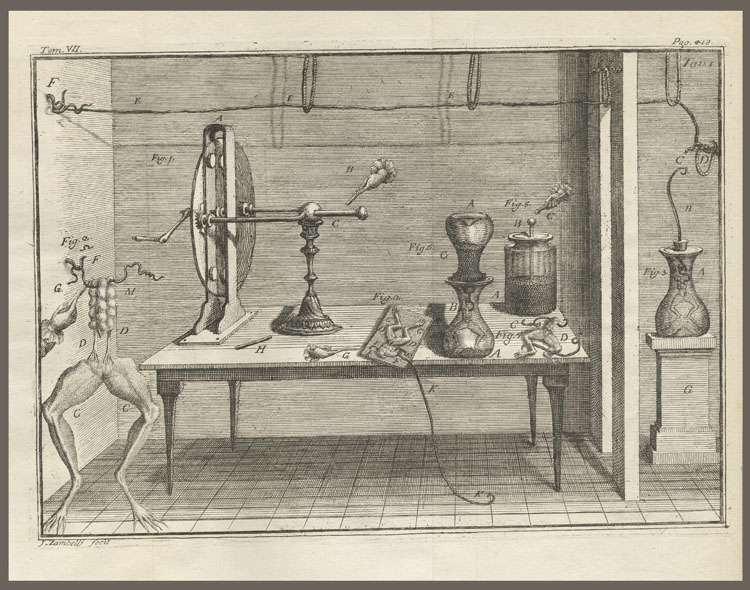 Arthur C. Clarke (in A-Z of Mysteries) wrote that Mary Shelley once attended a lecture by Victorian scientist Andrew Crosse, who had put electric currents through various crystals and was amazed to find small filaments eventually protrude which, in turn, developed into small insects. The insect in question was named after Crosse; to this day it's nomenclature is Acarus Crossi. Clarke held that she was so impressed by the exploits of this 'mad scientist' who created life in a laboratory that after a particularly vivid nightmare she was inspired to write Frankenstein.

Not the answer you're looking for? Browse other questions tagged novel frankensteins-monster or ask your own question.

14
How is the original Frankenstein movie (1931) different from the novel?
9
How did Dr Frankenstein get enough plus size parts to make his oversized creation?
27
What were the bolts on Frankenstein's Monster for?
3
Why does Frankenstein need multiple bodies to revive a body
11
Looking for a specific Frankenstein short story
12
What is the significance of the white hair of the Bride of Frankenstein?
7
Kindle book about a woman who helps remove ghosts from houses
22
What is Frankenstein's monster made of in the original novel?
7
Art book based on realistic "Frankenstein"?