Why was the female Thor not given another name?

The character Thor, with Thor being his birthname I would guess, eventually "retires" as he loses his power to wield his hammer Mjolnir...and his arm. In the recent comics, it seems that a woman (not sure if she is identified somewhere) picks up the hammer and thus gains the power of Thor.

The following is an excerpt from wiki describing the incident:

Although Thor initially attempts to reclaim the hammer, after witnessing the woman wield its power against a Frost Giant invasion, he officially gives her the name and role of Thor, deciding to simply refer to himself as 'Odinson', using an artificial arm and Jarnbjorn as he continues to be a hero.

Fair enough that the woman gains Thor's powers and the hammer becomes hers but why on Earth (or indeed Asgard) was she given the name of Thor? Why not another name so that she is her own identity and hero instead of being given a name which would assume her to follow the footsteps and shadows of the previous male Thor?

I'm looking for any official sources, if one exists, that answers this or a similar question.

The original Thor was called such because his birth name was, indeed, Thor Odinson. Once he came of age, Odin granted him his power and named him as the "God of Thunder" and "Protector of Midgard". Originally, his name and role were two different things, and this state persisted for a thousand Earth years.

Later, however, Thor's arrogance led Odin to banish him to Earth. At that point, Odin placed the famous spell on Mjolnir:

Whosoever holds this hammer, if he be worthy, shall possess the power of THOR

From this point forward (presumably), the power of Thor - his role as "God of Thunder", his abilities, and even his name - became something that could be passed on to others. In the past when this has happened, Thor has seen fit to challenge the new Thor and re-take his place among the Asgardian pantheon. An example is Beta Ray Bill, who briefly used the name of THOR until the original returned and challenged him.

When the (as of yet unidentified) woman showed her worthiness to wield Mjolnir, a disenchanted Thor decided to relinquish the role. Thus, the woman took on the role of THOR - God of Thunder & Protector of Midgard. Thor, meanwhile, took time to recover both physically and spiritually. His decision to drop the name "Thor" and call himself merely "Odinson" is symbolic of his fall - a sign that he no longer feels worthy of the name.

We can only assume that, at some point in the future (when sales demand another change), Thor will man up again and resume his role & duties once more.

From the writer of Thor, Jason Aaron:

And the new volume will just be called "Thor," correct?

Right. I like that. If it's "Thor: Something" it's a different kind of book. You pick up this book and it just says "Thor" on the cover, which features a new female version of Thor. It's pretty much telling you she's not She-Thor or Lady Thor. She's not Thorika. She is Thor. This is the new Thor. So I like that part of it.

There are many interviews with Jason Aaron where he details his decision to have a female Thor.

Since Thor's powers come from Mjolnir, they are transferable. The new inscription reads:

Whosoever holds this hammer, if she be worthy, shall possess the power of Thor. 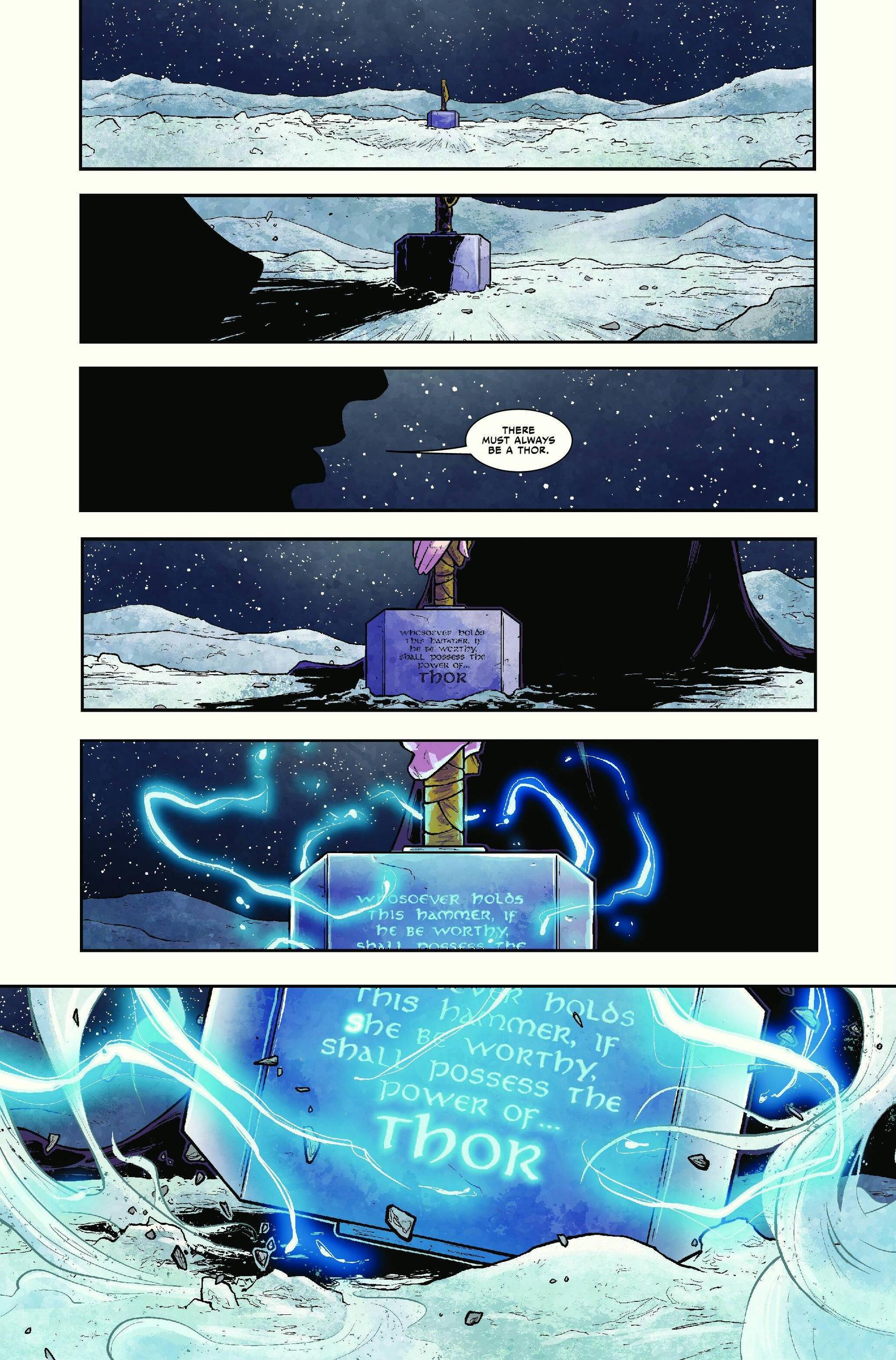 So, she has the power of Thor. She doesn't have the power of some other-named hero. Jason Aaron explicitly wanted readers to know this new Thor wasn't just a temporary stand in for Thor Odinson, and that the two of them aren't operating concurrently. Her storyline is the Thor storyline, and she is acting with the power and authority of Thor.

Comic books have a history of female versions of supers (usually not with the same name). They're generally viewed as not much more than a trope. I believe Jason Aaron is trying to elevate this character above the position of the mostly forgettable female counterparts.

I also think he's trying to combat some sexist stereotypes, especially within the comic book culture. This is speculation, but after reading several of his interviews it's clear that he doesn't think her gender should be a problem, and neither should fans. So, he's pushing an agenda. (Whether or not you agree with the agenda, I think it's hard to argue against there being one).

There are plenty more interviews than just the one I linked. They're not all identical. There was major PR going on for this change.

When Thor was banished to Earth, the inscription placed upon Mjolnir was never intended to pass Thor's power on to others. It was obviously Odin's intention to teach Thor humility by making him live as a human, not to take his power away from him. Don Blake was worthy BECAUSE HE WAS THOR! This is partly why anyone else who was 'worthy' gained the POWER of Thor, but none of them, including Beta Ray Bill, gained the IDENTITY of Thor. Thor only became a title because of BAD WRITING! Jane Foster kept Thor's name so that the comic could gain from the in place fanbase. That is why her comic is now at issue 700, yet she has been in less than 50 issues. Why not give Sif her own comic? No fanbase to steal! Why not make Hercules a woman? Same answer. It is also conveniently forgotten that Thor's power comes from his faher, Odin and his mother Gaia, not from his hammer. Mjolnir amplifies and channels Thor's power, but has never been the source of it. It saddens me that so many have embraced this, simply because Jane Foster is a woman. I applaud any attempt to combat sexist stereotypes, but this rings hollow when existing heroes are sacrificed to do it. As for the power and auhority of Thor, I don't think so. it ain't a title, it's been Thor's name for hundreds, if not thousands of years. Comics DO have a history of creating female versions of male heroes, but THAT IS ALL THIS IS! If Supergirl had been named Superman, she would still have been a female version. A rose by any other name. And on that note, why not create a NEW heroine?(I know I've already answered that). Where is the Black Widow movie? You want diversity and equality? There it is!

54
How does Mjolnir determine 'worth'?
6
You can't wield Mjolnir unless you're worthy, but has anyone ever stopped Thor from wielding it?
7
How Did She Become the New Thor?
10
If Thor does not hold Mjolnir, but he is worthy, does he possess the power of Thor?
8
Is the new Thor actually the Goddess of Thunder? Is the old Thor still the God of Thunder?
11
Why didn't Tony actually try Thor's fingerprint?
22
If Mjolnir was made for Thor, why is Hela seen using it in Thor: Ragnarok before it was even given to him?