I am looking for the author / title of a short illustrated story about a robot (humanoid form) that crash-landed on planet earth and a boy finds the wreck. He climbs into it and goes up to the head and meets with the alien kid. Shortly after, the "mother" robot finds and rescues the stranded robot and the story ends.

The robot's control station is the "head".

I remember the cover having a yellow border and depicting in a grey tones a forest. In the centre of the cover there is a golden humanoid robot wreck, mainly the "face" is shown.

The book should be of the mid-80s and no more that 25-75 pages with a couple of illustrations and in english language.

The book is The Fallen Spaceman by Lee Harding. 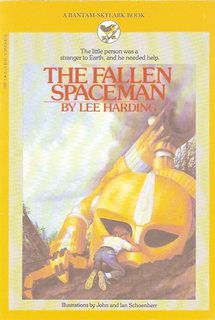 Australian sf writer Harding, author of last year's paranormal YA novel Misplaced Persons, has come up with a clear-cut, dramatic predicament that kids can relate to: inside a giant computerized spacesuit, accidentally hurled to Earth, is tiny spaceman Tyro--and imprisoned with him by accident is a young boy, Erik. The spacesuit, its computer awry, is out of control and in danger of coming apart; Tyro can't survive on the air outside, Erik can't survive on the air within. But: the route to this genuine dilemma is via lots and lots of prosy exposition and rumination; Erik figures chiefly as an innocent victim--the object first of his father's concern, then of Tyro's; and it's not until page 57 (30 pages before the end) that we actually get into the spacesuit with him and witness his discovery of tiny Tyro--not a fearsome giant but his ""brother in distress."" (Before, there's much ado about siezing the giant spaceman and rescuing Erik.) The ending is tense, but also bathetic and preachy--and again none of Erik's doing: with the rampaging spacesuit finally stuck in a lake, Tyro helps Erik escape into the air. a noble sacrifice interrupted at the very last moment by the miraculous appearance of a starship come to rescue him. The people on Earth aren't all warlike, he ruminates; ""in their children there was hope for a happier world."" Virtually all of this, in short, is written from the outside--as a story told rather self-consciously to children. It's also presented in a flat 7fl x 8 3/4 format for younger children who may not have the patience to wait through the preliminaries for the action to be joined.

Not the answer you're looking for? Browse other questions tagged story-identification robots childrens-novel soft-sci-fi or ask your own question.

11
Identify an '80s/'90s animated film from a scene
6
1970s/1980s illustrated hardback book in the style of John Berkey, ends with battle between protagonist and aliens
19
Children's book: Book of curious machines
7
Book series - Boy finds gem and is transported to a fantasy world
12
Scholastic sci-fi anthology book containing a short story about a planet with crystal monsters