Is there any canonical evidence of Vulcan nerve pinch being used on species other than humans, humanoids and horses?

The Vulcan nerve pinch clearly works on humans and other humanoids. And—as seen in the 1989 film, Star Trek V: The Final Frontier—it can clearly work on horses as well.

Is there any canonical evidence of the Vulcan nerve pinch being used on other non-human/non-humanoid species, wild animals, or even on small domesticated animals like cats or dogs?

The Vulcan Nerve pinch seems to be effective on a wide range of humanoid species (Human, other Vulcans, Romulans, etc) as well as certain animal species, notably a horse in the Star Trek V film.

Spock knocks out a giant panther-like creature in the "When Worlds Collide" webcomic. Interestingly, because it's a Robert Orci creation, it's actually a higher canon level than the animated series (see below) 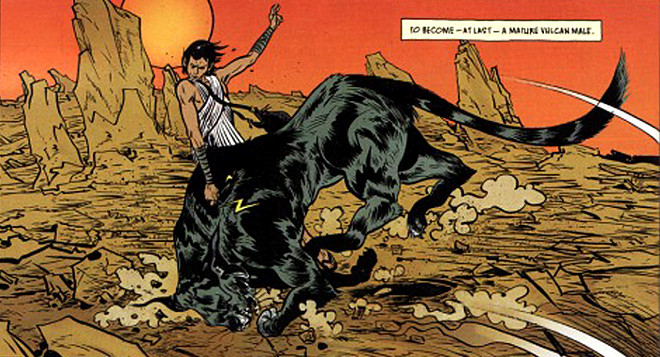 As far as other animals are concerned, we see the Nerve Pinch being used against an alien creature known as a Le-Matya in the Star Trek animated series.

For the record, I'm unaware of the Nerve Pinch ever being used on anything as small as a cat or a dog but there's certainly no reason to assume that it wouldn't work.

15
Can other species besides Vulcans do the Vulcan nerve pinch?
16
Have there been any canonical references to the holodeck/holosuites being used for virtual physical 'partnerings' with holodeck-produced constructs?
17
Why are there so many human Borg?
5
Are there any species a Vulcan can't mind-meld with?
6
What humanoid species are immune to the Vulcan nerve pinch and the mind meld?
7
Were Vulcans more intelligent than humans?
10
Were the horses in The Final Frontier an Earth breed?
5
Is there any connection between the hypothetical planet Vulcan and the fictional planet Vulcan?
12
Have any humans remained conscious after a Vulcan nerve pinch other than Khan Noonien Singh?