I found the book in my middle school library some time between 1979-1983. The book may have been from the 70's, I doubt earlier. It was a short story science fiction series geared toward grade school, elementary school kids. The stories seemed grown-up to me because they didn't always seem to end happily.

Stretching back my mind, the one story that captured my imagination the most was of this boy traveling to another planet where grass, rivers and the sky were different colors like purple, green and red. Another story may have involved kids with weird space pets.

I can describe the books, from memory, as being thin hard-back books that were tan in color and had a little area on the front of the book with an illustration of a moment from the story within. I remember there being at least 3 or 4 books that my library had, with more in the series.

I don't remember if they were by the same author, but it seemed to be a series.

I also remember that one of the stories had a child who had some sort of weird pet. This may be the above story with purple grass, red or green rivers... Anyway, the kids pet was some sort of cute looking dog with a star around its head (some sort of interstellar type of dog I guess). I remember it, because I think that was the illustration on the front of one of these thin, tan hard-back books. Also the illustration may have been done in red or orange.

Could it be the children's sci-fi book series The Chronicles of the Starship Alexandria by Norwegian author Jon Bing? It consists of four books published between 1975 and 1985:

The first book is about a boy named Benji who lives on Azur, a beautiful and paradise-like planet (although I don't remember the color of the grass, river and sky). Benji has a pet called Miromurr, a "bat cat" who somewhat fits your description.

At least in the original Norwegian publication, this book was a thin (178 pages) hardcover book with a tan cover and an orange-ish illustration featuring Benji and Miromurr: 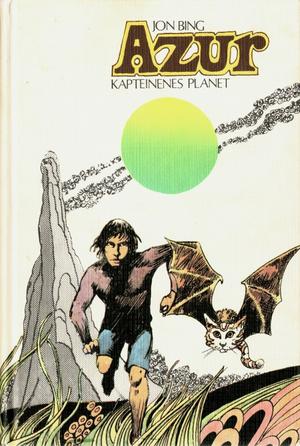 In the other books, Benji and Miromurr travel with the large library starship Alexandria to other planets, where they meet other children. These covers were also tan, with illustrations of moments in the book; the second book's cover (again, at least the Norwegian edition) had the kind of "area" you mention, with Benji and Miromurr inside: 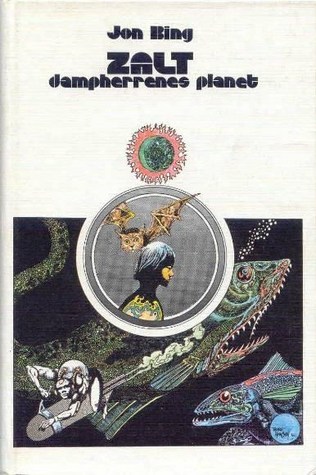 And the remaining two book covers: 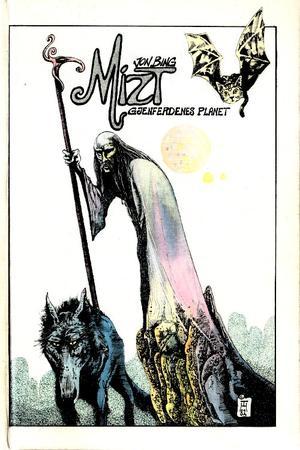 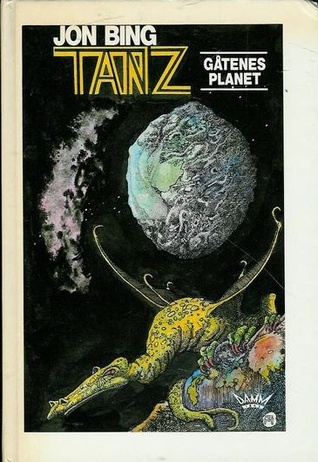 I have been unable to find English covers. In Denmark the books were published with the same cover art, but with different colors, so they weren't tan-colored there at least.

This is a wild guess, but could they be the Raintree Reading Series? I haven't found the specific story you're looking for, but they match the small profile of hardback books, combined with the single illustration on the front. And they do fit with the time period and were intended to be educational (and yes, the endings were often less than happy).

The story you're looking for is called "Something Green" by Fredric Brown. I also read it in junior high, and it was one of my favorites. I found your post during my own search for the title, and since I have found it, I figured I would come back to share with you also.

While it does have oddly colored vegetation and an odd alien companion, it stars a solo astronaut in a red jungle.

The big sun was crimson in a violet sky. At the edge of the brown plain, doted with brown bushes, lay the red jungle.

McGarry strode toward it. It was tough work and dangerous work, searching in those red jungles, but it had to be done. And he'd searched a thousand of them; this was just one more.

The little five-limbed creature that rested on his shoulder didn't answer, but then it never did. It couldn't talk, but it was something to talk to. It was company. In size and weight it felt amazingly like a hand resting on his shoulder.

He'd had Dorothy for -- how long? At a guess, four years. He'd been here about five, as nearly as he could reckon it, and it had been about a year before he'd found her. Anyway, he assumed that Dorothy was of the gentler sex, if for no better reason than the gentle way she rested on his shoulder, like a woman's hand.

14
What novel series has a young boy travelling across space with librarians and a bat-like dog?
9
Looking for a book -- purple grass on an "alien" planet

11
Shown in elementary school; sci-fi mini-series with kids about a book or reading. Tonal notes involved
6
Fantasy/Sci-Fi kids book: boy and telepathic owl/bird - in space/other planets setting
5
Looking for a specific book series about kids playing a computer game and getting sucked in!
7
Book of sci-fi short stories: purple and black cover with sorceress and cat
9
Young adult fantasy trilogy with a large symbol and coloured background
2
80s (or earlier) children's book series about a museum, time travel, and dinosaurs
6
Series of novellas about a video game and weird silly putty
17
Story identification - Childrens' Sci-Fi circa 1980s