Here's a relevant clip. The lightning starts around 3:22

In a recent question, it came up in the comments that this was an Disney canon example of absorption/tutaminis.

It looks like the energy of the first bolt is concentrated and redirected. The second assault shows the arcs of lightning shooting off away from Yoda before striking him, and then dissipating.

I would like a Disney canon only explanation of this mechanic.
In what way is Yoda using the Force to counter Tyranus's attack?

I'm interested in the full path of the "energy" of the lightning attack after it's produced by Count Dooku, including any conversions of that energy to other forms (if they occur).

If there are no canon sources on this particular scene, then a similar scene in any other canon media, if such a scene exists, that sheds light on what happened would be acceptable. Preferably, it would still be with Yoda, but the attacking Sith is irrelevant to me.

Aside from the Yoda vs Sidious scene in Episode III, I also found this scene from The Clone Wars where Yoda fights Sidious. Lightning attacks start around the 1:00 mark and at 3:05 & 3:18.

Here are some .gifs and images from the lightning attack.1

First, Yoda "catches" the lightning and, after a noticeable pause, sends it back to Dooku:

If you look closely, the bolts appear to come from his fingertips just as they do from Dooku's fingertips: 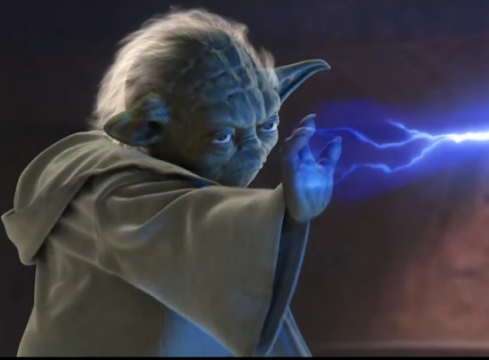 Dooku attacks again, and this time Yoda deflects the lightning like a lightsaber deflecting a blaster bolt (no pause after he "catches" it): 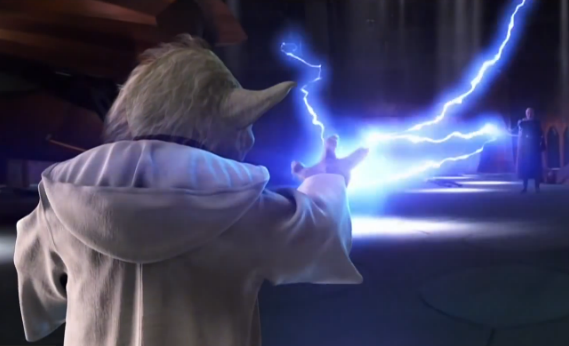 Finally, we see the lightning enter Yoda's hand and disappear (he "catches" it but does not return it). We see him for several seconds after the lightning disappears, yet there is no visual indication that the energy goes anywhere.

Based on the first case -- when he "catches" the lightning and then sends it back -- it makes no sense for him to have dissipated the energy externally only to have to re-create the energy in order to send it back. It makes more sense that he temporarily absorbed the energy within himself, and then directed it back to Dooku. The fact that the lightning bolts leave his fingertips is further evidence that Yoda absorbed the bolt temporarily.

b : to transform (radiant energy) into a different form especially with a resulting rise in temperature

This seems to be as clear of a case as possible of Yoda absorbing the energy from the lightning into his body.

Of course, for all we know, Yoda converts the energy from the lightning into heat on the surface of his hand (which we obviously can't see), or he uses an invisible Force barrier of some kind, or something else to (invisibly) avoid absorbing the energy internally. The script doesn't even mention the lightning attack, so it's no help. The best evidence from the visual cues in the movie is that Yoda did indeed absorb the energy internally.

If we take only disney canon we can't say for sure what the power is exactly. But lets take a look at two of the films there. Star wars 2, 3 and star wars 5.

In these films 4 instances of force lightning or energy bolts being used and countered are being seen. According to the novelisation of star wars 6 there was a fifths attempt when luke was electroluted by the emperor but utterly failed.

In all other 4 instances the jedi either use their lightsabers or their hands to counter the lightning. From what we see there are 2 instances (Yoda vs. dooku and mace vs. Palpatine) where the force lightning is sent out again against the source (the sith who created it). In the other two instances there is the blaster bolts hitting walls after being redirected by Vaders hand / seemingly absorbed (according to the screenplay only a redirection occurs) for the Han Solo vs. Vader scene in Episode 5. The other is Yoda vs. Palpatine where Yoda absorbs the lightning into his hands again with the same glow as in Episode 2 against Dooku but does not unleash the lightning against its owner in this case but instead created sort of a force explosion / force push.

So going with the films it seems like it works in this way:

If we take the newer special effects into account and the glowing ball of energy which yoda has in his hands which resemble the lightning he just "absorbed" it seems very likely that they defend themselves by stopping the energy like a falling piece of debris and then releasing the energy into a different form / direction. Thus just from the films it looks way more like solely redirection of energy than absorbing it (or a combination of both).

31
What is the singular source of Star Wars canonization?
19
Sith using the light side of the Force?
21
Did Vader deflect, absorb or block Solo's blaster?
2
How is Force Lightning possible?