Harry, Ron, Hermione, Ginny, Neville, and Luna share a carriage from Hogsmeade Station to Hogwarts in Order of the Phoenix. Of course, this is when Harry sees Thestrals for the first time, having witnessed Cedric Diggory's murder a month or so before. When he expresses shock and trepidation at the now-visible-to-him Thestrals waiting to pull the carriages, Ron considers Harry as if Harry were totally mad. Ron is genuinely baffled at Harry's behavior, and expresses he has no idea what Harry might be referring to. Ultimately, Luna is the one who tries to put Harry at ease:

‘Are you feeling all right, Harry?’

Harry felt utterly bewildered. The horse was there in front of him, gleaming solidly in the dim light issuing from the station windows behind them, vapour rising from its nostrils in the chilly night air. Yet, unless Ron was faking – and it was a very feeble joke if he was – Ron could not see it at all.

‘Shall we get in, then?’ said Ron uncertainly, looking at Harry as though worried about him.

‘It’s all right,’ said a dreamy voice from beside Harry as Ron vanished into the coach’s dark interior. ‘You’re not going mad or anything. I can see them, too.’

‘Can you?’ said Harry desperately, turning to Luna. He could see the bat-winged horses reflected in her wide silvery eyes.

‘Oh, yes,’ said Luna, ‘I’ve been able to see them ever since my first day here. They’ve always pulled the carriages. Don’t worry. You’re just as sane as I am.’

Why on earth would Ron not know what a Thestral is? They're listed in Fantastic Beasts and Where to Find Them, a first year textbook, under Winged Horses. As well, Ron is a generational pureblood wizard -- how could he not have heard of Thestrals? (It's kind of like Harry not hearing a word about the Trace until he's almost 17, even though he's been accused of underage magic at least three times throughout the series).

When Harry talks about the Thestrals to Ron, Hermione is out of earshot, but it would seem like a conversation Ron might share with Hermione out of concern for Harry. Undoubtedly -- at least I think so -- Hermione would know that Harry was seeing Thestrals, even if she couldn't see the Thestrals herself, and she could have informed Ron accordingly, had Ron confided in her.

Let's look over some of the possbile explanations of why Ron ought to have known, and analyze each one for plausibility

Most of the wizarding community considers Thestrals to be creepy animals because of their association with death. The average wizard--if he or she even knows of their existence--does not consider Thestrals an enjoyable subject and would probably not discuss them with his or her school-aged children (e.g. Ron) unless it was necessary. Luna Lovegood was unusual in that she felt comfortable with them. A more common reaction was that of the one Slytherin boy in Hagrid's class who could also see them: he wore an expression of distaste.

As a result, Thestrals are not usually covered in Hogwarts classes below the N.E.W.T. level. Even if Thestrals are mentioned in a first-year textbook, teachers might not cover them in class--in which case only the most academically-focused students, like Hermione, would remember learning about them. They are considered a more advanced animal, probably because of the way many wizards are disturbed by them. (Also, showing them to younger students might be ineffective, since most of the students would be unable to see them at all.) Without having been shown Thestrals, the students would be less likely to remember what Thestrals were, even if they had read or heard the name before.

Whether the older Weasleys knew about Thestrals is not addressed in the books. Mr. Weasley was likely not a very good student--job requirements for wizards in Muggle Relations are notoriously easy. He might not have remembered that Thestrals existed. What Mrs. Weasley's N.E.W.T. courses were is unknown. Bill would not have needed a Care of Magical Creatures N.E.W.T. for his job, and there is no evidence that the twins took one. Most likely, only Charlie Weasley would have taken N.E.W.T.-level Care of Magical Creatures, but he seems much less inclined to glib talking or practical jokes than Bill or the twins. As a result, he might not have bothered to mention Thestrals to the rest of the family, and Ron would not have heard of them at home.

I think we can assume that Ron had seen the page of Fantastic Beasts that deals with Thestrals, since he appears to have graffitied it: 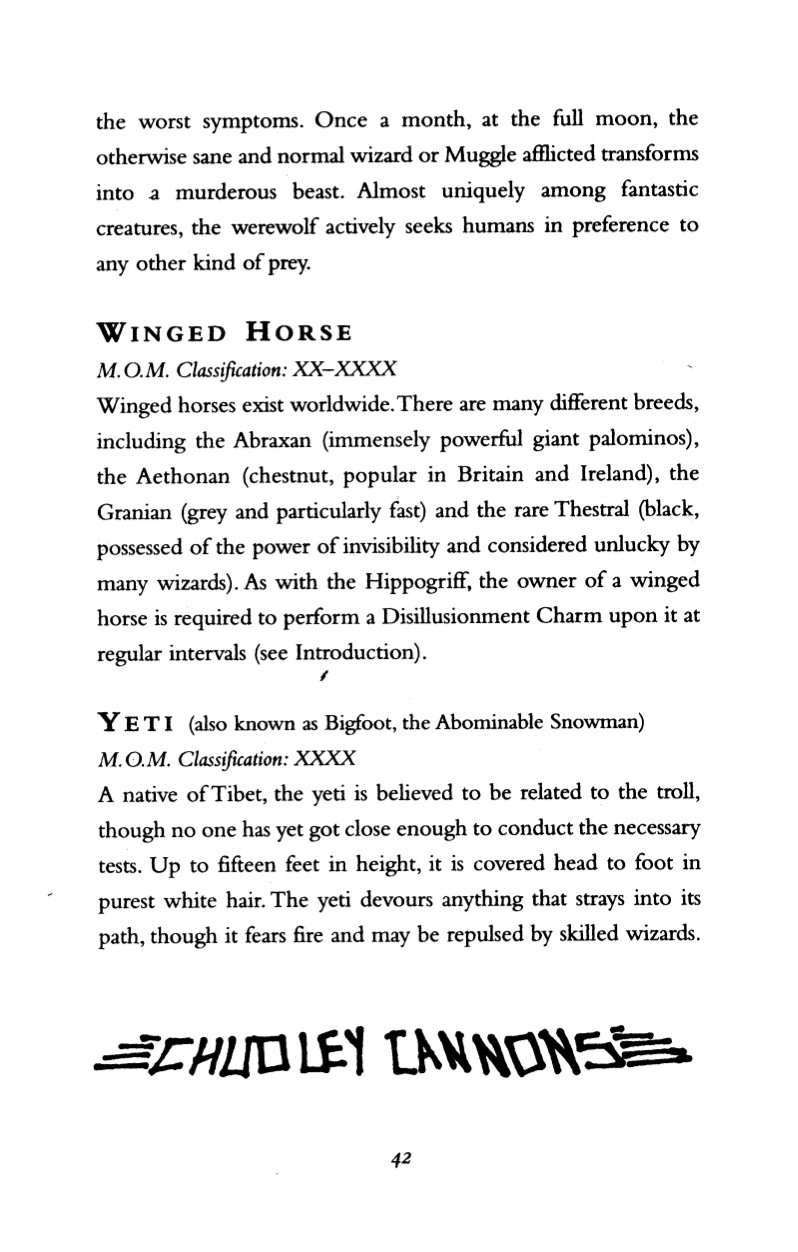 However, I think the key point here is to see what Fantastic Beasts actually says. The Thestral is merely mentioned amid a list of species of winged horses, and the only information given about them is a parenthetical half-sentence:

There are many different breeds, including the Abraxan (immensely powerful giant palominos), the Aethonan (chestnut, popular in Britain and Ireland), the Granian (grey and particularly fast) and the rare Thestral (black, possessed of the power of invisibility and considered unlucky by many wizards).

Even if Ron had read this passage and remembered it, all it would tell him is that there is a type of horse that has the power of invisibility and is considered unlucky. There is nothing there explaining that some people can see them while others cannot.

Thus, in his confrontation with Harry knowing about Thestrals wouldn’t help. Harry was claiming to see something that Ron couldn’t see. Positing the presence of invisible horses wouldn’t address the situation, because invisible horses should have been invisible to Harry as well.

Therefore, in Ron’s mind Harry would at best be seeing something that he shouldn’t be able to see, which would be a cause for concern (think of the voices Harry was hearing in his second year that no one else heard).

He was supposed to be portrayed as the dumbest of the three while Hermione was the smartest. In the first movie to make it more realistic, they made Ron smarter, but Ron's still dumb, so it was probably a callback to him being dumb.

81
Why couldn't Harry see Thestrals at the end of Goblet of Fire?
27
Why COULD Harry see Thestrals following Cedric Diggory's death?
9
Does seeing someone fall through the veil count as seeing death?
53
Could Hermione really free the Hogwarts house-elves with her knitted hats?
28
Could a muggle see a thestral?
26
Why are people surprised that Hogwarts is non-apparateable?
20
How fast do Thestrals fly?
16
How could Dumbledore's Army ride thestrals even though only Harry and Luna could see them?
7
Why wouldn't Harry ever have had butterbeer before?