I'm looking for a cartoon from the 70's (I believe) which is about a set of twins; one plump "fairy" and a skeletal "demon". The "fairy" has magic powers and ends up living a life of pleasure, while the "demon" flees and turns evil.

When the "demon" finds his new weapon in the ruins of the ancient world (roughly modern day) he plots to enslave the world; the weapon in question is a set of propaganda movies with Adolf Hitler.

What you describe is at least vaguely similar to the animated movie "Wizards", which the Wikipedia describes as 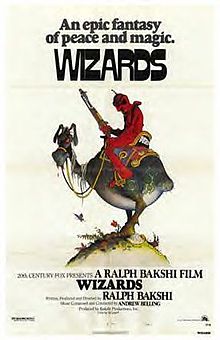 In the movie the brothers are wizards rather than fairies, thought the good wizards companions include a scantily clad, winged fairy. There is heavy use of World War II footage in various psychedelic mixes to show the evil armies on the march.

There are many images and YouTube segments (or the whole movie) available from the search "animated movie wizards", but Google doesn't know that they are copyright kosher so I have not copied any here.

I have always liked the movie though it is a bit corny in places. Many of my friends are not so happy about it, so I suppose it is a "so bad it's good" movie---a category that is highly personal in my experience.

15
I'm looking for a sci fi book with a tribal woman, hermaphrodites, and implanting minds into new bodies
5
Identifying an animated TV series set in a post-apocalyptic world where robots have taken over the world
8
Fantasy novel where girl enters the world of fairy tales
30
Bums take over the world
15
A SF novel about the invisible globes that try to take over the world
2
Manga where protagonist time shifted into a future world after defeating the demon king
7
Dystopian manga set in a post industrial world where old technology is forbidden and everything is steam/air powered
11
Book about a phone that can call the dead, male protag calls his dad? Also a lot of weird crap
20
Looking for a collection of stories about an isolationist community