Movie about earth without light

It is a science fiction Hollywood movie story about earth in which people live inside the earth, where no light is present. One day a boy and a girl find the way to get on the surface.

In the midst of an unspecified catastrophe which is destroying human civilization and polluting the environment, an underground city is constructed to shelter a large group of survivors. The "Builders" of the underground "City of Ember" place secret instructions to future generations in a small box timed to open in exactly 200 years after the event. The City of Ember is built into a vast and gigantic underground cavern and is filled with conventionally sized 3 to 4-story buildings and houses. Far above the tops of the buildings are banks of floodlights that light the city during the day and provide light for the greenhouses. The lights are powered by a massive generator.

200 years after the apocalypse...Ember threatens to fall into darkness as the main generator begins to fail. Blackouts are occurring with increasing frequency and last longer each time. The reserves of canned goods and light bulbs are also becoming depleted. Much of the knowledge about how to use and repair the systems necessary for the city's survival has also slowly been lost over succeeding generations, as the knowledge was passed through spoken words rather than written.

It's left to two young adults to unearth the secret of Ember and to lead the way out. 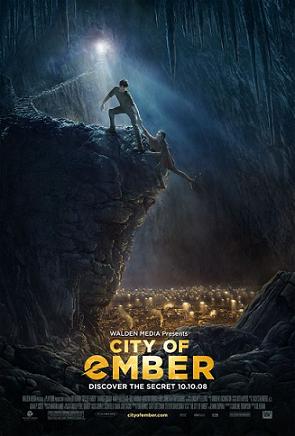 12
What movie was based on ‘Inverted World’ by Christopher Priest?

23
A story about fossilized alien remains being discovered on earth
6
old scifi movie about a traveler who comes to earth
3
Movie about a young boy with an alien father coming to find him
13
A short story about a girl remembering the day she got her brain implant
8
I'm looking for a movie about a weird religious journey
16
Two computers buried under the earth
6
British kids's movie or TV show, teleporting into Tower of London