I read it as a paperback book somewhere in the mid-90s, I think. The protagonist lived in an apartment building. He's out on the balcony when a birdlike (but humanoid) alien swooped down and attacked him. The presence of the aliens was commonly known and was a known danger. He kills it with his watering can and is rewarded by either the aliens or the humans for it with money. Other than that, all I remember was that the chapters were started with an internet-like news report which I think chronicled things getting worse and more violent. One of the updates involved the bombing of a bridge with the casualties raised by having two slow-moving trucks moving side by side obstructing traffic and ensuring a full bridge.

The internet system was pretty ubiquitous as I recall. I think that he looked up his watering can shortly after the incident with the aliens, but decided to keep this one, even if it leaks a bit. I want to say that it was by Piers Anthony, but none of the book titles look familiar. I think the cover I had showed the man being attacked by the bird-man, which looked kind of like the illustrations on the cover of The Stand.

This is probably Kevin O'Donnell's ORA:CLE.

It takes place in a fairly far-future where global warming has forced the entire (surviving) population of earth into living completely indoors in large apartment/office towers. There are matter transporters that can only send non-living items (it kills living things). Some time after everyone moves into these towers the Earth is invaded by winged aliens called Dacs (short for pteradactyls). The Dacs don't seem to care about taking over in any usual sense, they just keep us from developing space travel and hunt us for sport - but only if we go outside. 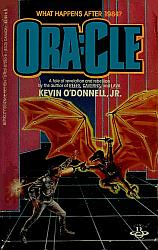 Here's part of the scene with the watering-can and the winged alien:

He moved. Whirling to his right, he swung the watering-can like a tennis racket, wristing it up and into an overhead backhand shot. He had plenty of time because time had slowed. A sub broke water in New Haven harbor. The wrought-iron railing cast a short, slanted shadow. The Dac mothership drifted three klicks overhead. His lungs were already laboring.
To his right, great bat-wings fluttered as the Dac tried to balance itself. The five-centimeter claws of its knobbly eagle’s feet skidded slightly on the flagstones. Its carrot-colored beak snapped in frustration, flashing razor-sharp teeth and a predator’s hook to the upper jaw. Its huge head bounced on its child-sized torso. Its hand—with a thumb, three fingers, and retractable claws—wavered as it tried to aim the gun that gleamed like silver.
Ale had spun nearly a hundred and eighty degrees. Thinking, But the damn alarm was guaranteed! he hurled the watering-can.

After killing the alien, other aliens (of the same species) come to investigate and apparently decide that this was a "fair killing". The cut off the dead one's beak and give it to the main character as a trophy.

3
Sci fi book or series from the 1980's, constant information

16
YA paperback about a boy talking to an alien on his computer, alien asking for help
1
Paperback novel about a sea or lake monster (I think)
4
1960s (?) novel about alien invasion
33
Novel about a man who has his car stolen and is cryogenically frozen with his cat?
6
Fantasy novel with boy who can shapeshift into a jaguar
10
Short novel about man who can control reality
8
Novel about a man who helps alien fix his spaceship, is claimed as an artist on alien's world