How many seats were there in the Senate of the Galactic Republic?

I love those flying disks in the senate of The Galactic Republic. How many disks were there? I googled, but without luck. A link says it 10000, but without citation. Is this ever mentioned in a book or other media?

The Galactic Senate Chamber is the nerve centre of political activity on Coruscant. The huge open area is lined with 1,024 pods arrayed in concentric circles, each pod housing a delegation from an important planet, sector or political body. The pods are outfitted with anti-gravity repulsorlifts, so that when a politician wishes to address the assembled Senate, his or her pod detaches from the wall and floats into the open air in the middle of the chamber. The entire structure is fitted with voice-amplifying microphones and automatic translators, and hovercams constantly flit about to record the proceedings for the official record.

At the centremost point of the Galactic Senate Chamber is the podium of the Supreme Chancellor. This is where the elected leader of the Republic sits to hear arguments from every representative, usually joined in the podium by the Vice Chancellor and a senior administrative aide. The podium retracts into the floor when not in use, giving the chancellor access to a suite of rooms where business can be conducted between Senate sessions.

Note that the number of pods only slightly reflects the number of senators since each pod contains a delegation. Assuming (at a guess) ten senators per sector, there are potentially 10,000+ senators in total and possibly many more.

We don't know. Sources are conflicted as to how many there were.

The best source I can find for a canon answer is the Databank article on the Galactic Senate, which simply says that there were "hundreds of politicians". By visual inspection, there do appear to be hundreds (perhaps thousands) of repulsorpods (I count about 20 in the part of the lowest row that is visible): 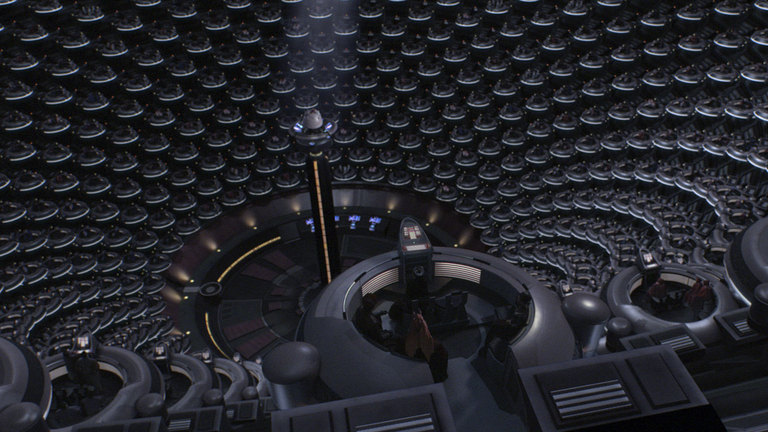 Moving to a pseudo-canon source, the Episode III novelization mentions the Delegation of 2,000, which was a group of senators who opposed Palpatine (the Delegation was also shown in a deleted scene from Episode III). Since the Jedi allege Palpatine has control of the Senate, these 2,000 senators are likely in the minority -- meaning there are possibly 10,000 senators in total. Presumably, each of these senators had their own repulsorpod.

Some sources, including Wookieepedia and Wikipedia, claim that there were exactly 1,024 repulsorpods. Neither source points to a source with that number -- Wikipedia links to the Databank article mentioned above, but that Databank article does not include the exact number. The number is probably based on the number of sectors that made up the Republic at the time of the Ruusan Reformation (Legends). The Ruusan Reformation Wookieepedia article in turn appears to get its number of 1,024 sectors from the Legends "Sector" article, which cites the Legends Star Wars: Attack of the Clones Incredible Cross-Sections reference book.

So, governments are complex, and I was bored, so I just decided to go ahead and count the things.

See below the most zoomed-out scene I could find (0:21 in this Youtube video), and my calculations: 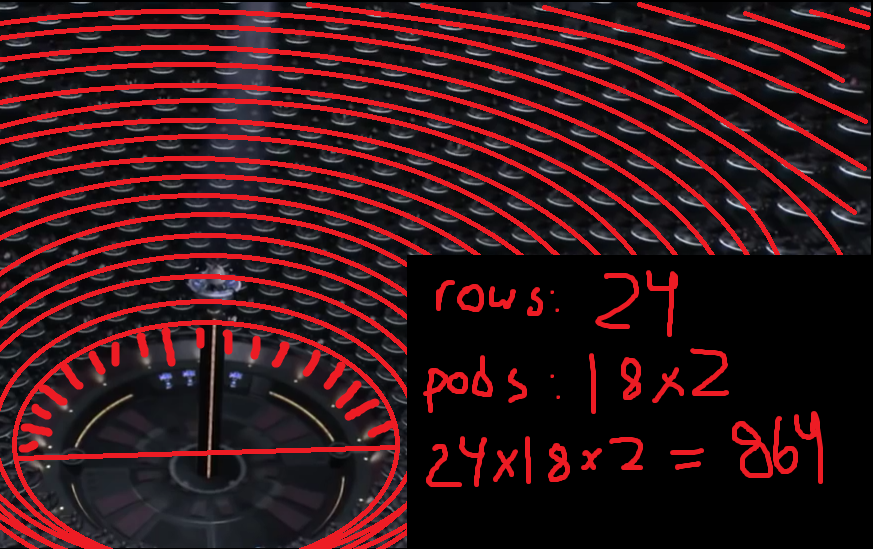 So with 24 rows of 36 disks each, that's a minimum of 864 'flying disks' in the Senate chamber, with 36 more for every row not shown in the image. From 2:41 in this Youtube video where you can see the roof, it looks like 24 is pretty spot-on, or at least within one or two rows.

How these numbers correlate to the actual number of planets/sectors/Senators represented I do not dare to guess.

At the height of its power, the Old Republic governed a million worlds, yet millions of systems remained unclaimed, unmapped and unknown.

Within the cavernous Senate rotunda, hundreds of politicians[...]

Under the New Order, the Galactic Empire continues to grow and expand, and new sectors and regions are being formed all the time.

24 rings if you figure 36 on the bottom level and add four pods per ring you get close to the 2000 number with 24 rings at 1968. only the CGI people know how many pods were represented. 24,372 senators (In background material composed by George Lucas in 1977 for licensees of the Expanded Universe, the "Republican Senate" represented a total of 24,372 systems and elected a Chancellor to a four year term.)

Not all of those senators had voting rights with many giving or loaning their support to seated Senators with votes.

37
How was Palpatine able to rise through the Senate so quickly to become chancellor?
39
Why was Naboo important enough to have a seat in the Senate?
4
Members of the Galactic Senate
12
How big is the space faring population in Star Wars?
4
How many systems are there in the Galaxy far far away?

19
How many R2 droid units were there according to canon?
10
How many official "Republics" are there in the Star Wars universe?
11
What powers did the Imperial Senate have?
10
How many clones in the clone army?
19
If Queen Amidala had signed the treaty, would the Republic Senate recognize it as legitimate?
6
How many stormtroopers are in the First Order military?
66
Why did the Jedi serve a corrupt Republic?
8
How much official communication was there between the Senate and the Jedi Council?
5
How many droids were in the droid army and how were they paid for?
5
When did the Separatist Movement start within the Galactic Republic?