I caught an old episode of the original Star Trek, "Arena," in which Captain Kirk comes extremely close to the Gorn he is fighting:

My question is, what prevented the Gorn from simply biting Kirk's face off? Being as the Gorn was stronger than Kirk, clearly close enough in the face-to-face initial contest to have used his vicious looking front teeth to inflict serious damage to Kirk, why did he not end it quickly by what would seem to be the "natural" way?

Is there a canonical, in-universe explanation for this? Does Gorn psychology make such a tactic unacceptable? Has their physiology come to the point where their mouth's cannot open wide enough for such a maneuver? Or some other reason?

According the official novelisation (by James Blish) the Gorn did try to bite him, but Kirk was able to keep it at bay by pushing it away with his arm:

Kirk sprang aside barely in time. As the Gorn passed, somewhat off-balance, Kirk swung a killing blow into its midriff. The impact nearly broke his hand, but it seemed to have no other effect. The club lashed back, knocking Kirk sprawling against the rocks.

The Gorn wheeled around, clumsily but swiftly, and pounced. Kirk, dazed, tried to counter with a forearm blow to the throat, but it was like hitting an elephant. Then the creature was gripping him like a grizzly. Kirk’s arm just managed to keep the teeth away, but that grip was going to break his back. 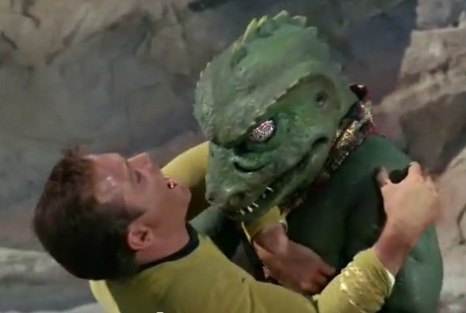 There is likely no canon excuse for why the Gorn wasn't easily able to bite and kill Kirk once the grappling had started. This is poor writing.

There is probably only an out of universe answer for this.

Animatronics were not at that level at the time, and it was a cheesy sci-fi costume.

Have you ever read The Man Who Counts, or War of the Wing Men, by Poul Anderson?

I suspect that the Gorn were aware of the possibility of something similar to the climatic plot twist in that novel. I suspect that possibly they scanned the Humans on Cestus III and learned that their biochemistry was poisonous to Gorns. And Thus the Gorn Captain wouldn't want to get any Human tissues in his mouth, even if he was brutal enough to want to bite someone.

Not the answer you're looking for? Browse other questions tagged star-trek aliens star-trek-tos psychology tactics or ask your own question.

6
Where were Korob and Sylvia from?
24
Did Kirk and Uhura actually kiss?
5
Why did the Universal Translator fail to decipher Gorn?
4
Star Trek - What is the relationship between the 'Bread and Circuses' Roman planet and the Romulans?
7
Can a Vulcan Mind Meld change a person's psychology?
0
Are Gorn and Tamarian related?
16
Why did Captain Janeway feel that using the Doctor as an expendable messenger boy was more important than keeping him around to heal the crew?
3
Are the Gorn and the Xindi-Reptilians somehow related?