In Steins;Gate (The Show), how does the first D-mail change the universe

In episode 1, Okabe sends the 1st D-mail, changing the world to the Alpha world line where Kurisu lives instead of dying. In episode 22, They reverse this by having Daru hack into SERN and remove the information from their database. This means that SERN knowing about D-mail (or about Kurisu's death) somehow prevents Kurisu's death in the first place.

What is the chain of events that keeps Kurisu alive in the Alpha world line?

How is Kurisu alive in the Alpha line?

This is a complicated question, but it basically comes down to Suzuha.

By sending the first D-mail, Okabe accidentally tips off CERN about time travel. Armed with that information, SERN develops their own time machine and eventually takes over the world (I'll get back to this point later).

Operating on instructions from her father, Suzuha takes a makeshift (and, because of SERN's monopoly on time travel, low-quality) time machine back to 2010 in an effort to stop SERN's rise to power. Because her co-ordinates are slightly off, she materializes in the roof of the Radio Building, rather than on it. Because of this, Dr. Nakabachi's conference is cancelled, he and Kurisu never meet there, and she doesn't get stabbed.

How did CERN develop time travel?

One of the steins;gate mangas, Shijou Saikyou no Slight Fever Chapter 3 "Muffled Phone", reveals that Kurisu went back to the Radio Building a few days after joining the Future Gadget Lab, and leaves her time travel thesis (the one she wanted to co-publish with Dr. Nakabachi in the Beta Line) there, where it is stolen by Moeka: 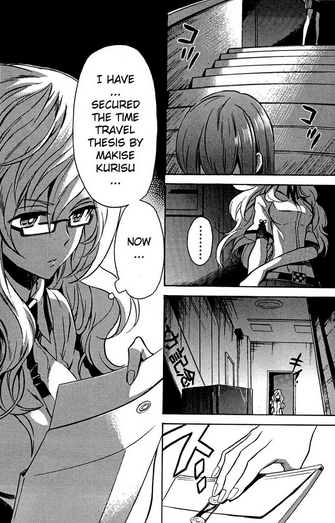 It's also strongly implied (if not stated outright) that the members of the Future Gadget Lab are taken into custody by SERN after they complete the Time Leap machine; Suzuha's intervention gives Okabe an opportunity to use the Time Leap machine and change his fate, but without her then SERN would have had more than enough resources to create their Time Machine, take over the world, and create the Bad Future that prompts Suzuha to go back and disrupt everything.

Okay, so what does deleting that D-mail do?

This is an odd case, and not explained very well.

Not having this D-mail in their database somehow prevents SERN from successfully developing a time machine1.

If the "jellyman" files are any indication, SERN's own time travel research was a stunning failure, and they would almost certainly have abandoned it. Kurisu's thesis is likely very theoretical, and wouldn't have given them the crucial insight that allows the Future Gadget Lab to develop the Phonewave and Time Leap: the notion of sending back data rather than matter.

It seems as though SERN really needs to get their hands on those devices, as well as the three who invented them (Okabe, Kurisu, and Daru) in order to successfully develop time travel. Without it, we end up in a different future where Suzuha:

With Suzuha not crashing, Kurisu is able to give Nakabachi her time travel thesis, which ends up getting her killed and getting us back onto the Beta World Line.

1 It's the how of this that I can't rationalize. I have a couple of theories, but none of them really pan out:

Unfortunately I can't come up with a satisfying explanation. "Because story" is, I suppose, the only thing left that makes sense.

My theory is that SERN has developed DMail and that deleting Okibes first DMail from their files would prevent SERN from seeing it in the future, putting the pieces together and then putting SERN agents in the past into action via their own DMail.

It stands to reason that if SERN is doing human testing then they are exploring every option that they have, and we also know that they have already invented DMail, but are misusing it in trying to send humans rather than data back in time.

Perhaps they are aware of this (their last human testing was years ago), and thats why they are interested in digitizing consciousness and therefore in Kurisu.

Y'all theorizing while it's literally explained in the 2nd episode that the satellite collapsing into the building got the conference cancelled and that is why Makise never attended the meeting. That's why she ended up being alive after the change.

Not the answer you're looking for? Browse other questions tagged time-travel steins-gate or ask your own question.

15
How does Peter stay in the primary universe, even though the Observers cease to exist?
11
How does time travel really work in The Terminator Universe
5
How did the First and Second Doctor make it to Gallifrey?
13
What's the title of a short sci fi story about how the universe doesn't want the past to change?
3
How does the dagger work in Prince of Persia
19
How does the time loop in Predestination get initialized?
6
How many times has the Doctor been to "the end of the universe"?
1
How does the Doctor avoid changing the history of the future?
11
How does Time travel work in Harry Potter universe?
3
Why doesn't the banana experiment change world lines in Steins;Gate?