How does Harry Kim get back into phase with the rest of the Voyager crew?

At the end of the Voyager episode "Deadlock", Harry crossed the boundary between the two vessels with an arm band because he was out of phase.

Does Harry need to carry on wearing the armband?

No, absolutely not. The armband seems to be needed to prevent the user from dying while crossing between the two quantum states, not to continue living on the other side. Think of it as a key rather than a scuba suit.

JANEWAY 2: Rig another one, Ensign. I'm going with her.

KIM 2: This should protect you from the spatial transition.

Note that once he's on the other side, he's freely able to walk around without the armband, as we see in the final scene of the same episode: 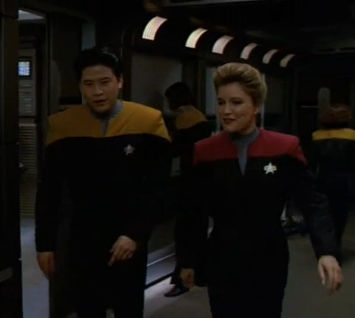 Is he out of phase forever?

Yes. Although it's not made clear in the show, he and the baby never return to phase. This is referenced in the follow up novel trilogy "String Theory", set between Seasons 3 and 4:

“Without more data as to the source of the altered engrams, it would be difficult,” the Doctor said simply. “There are many differences between your species which could account for… What is this?” the Doctor interrupted himself.

“There is a subtle phase variation in the molecular structure of Naomi Wildman which she does not share with you, her mother, or Mr. Neelix. Can you account for this?”

A theory was formulating in Janeway’s mind and the Doctor’s discovery crystallized it. “Almost two years ago, the day Naomi was born, in fact, our ship encountered a subspace scission and every particle of matter on board was duplicated, including the crew. The Naomi who was born on this ship did not survive, but the duplicate child did, and before the other ship was destroyed, she was brought on board.”

21
How was Voyager still in the Delta Quadrant at the end of the series?
6
Why did the two Voyagers have MORE problems after they moved apart?
0
Why were the “proton blasts” causing such problems?
5
How does out of phase Voyager get back into phase?
19
Why does Harry Kim get in trouble for sleeping with an alien?
6
How could the Duplicate Voyager crew not know that they were duplicates?
14
Does the ghost ship from Star Trek: Voyager appear in Enterprise?
12
How many people on Voyager outrank Harry Kim?
22
Were the Maquis who returned on Voyager punished for having been Maquis?
1
Why didn't the Voyager crew take the shortcut in Prime Factors, abandoning the ship?