How did Cooper and team know that the water is shallow?

In Interstellar, how did they know that the water on Miller's planet would be shallow just before landing, when they clearly didn't know that the entire planet was covered in water in the first place? Also, what would have happened if the planet wasn't shallow and was actually as deep as oceans?

In the official novelisation, they added an additional line of dialogue to suggest that Brand was monitoring some kind of remote sensor, possibly an active radar of some description.

Cooper banked as hard as he could, trying to shed more speed. The surface was coming fast.

The retro-rockets kicked in just above the surface, punching back against their velocity. He tried to hold it, but the craft slewed sideways as the landing gear came down. They dropped, hit the water, casting up a spray. The impact nearly jarred Cooper’s teeth loose, but he held on stubbornly. Then when the air cleared, they were down, and everything looked good. Brand had been right — the water was really, really shallow — so much so that the landing gear held the Ranger just above the surface.

This line is also found in the final draft screenplay. Presumably it was simply cut in editing.

The Ranger is low now, kicking up backwash

In the film itself, we (and presumably Cooper) can see that the downthrust is penetrating all the way to the sea bed: 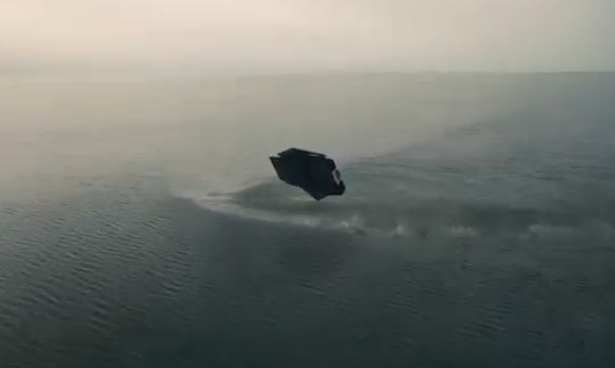 16
Why was the Ranger launched from Earth on top of a rocket?
7
How fast is Miller's planet orbiting Gargantua in the movie Interstellar?
40
Interstellar: non-breaking waves on Miller
9
How can Cooper fall into a black hole from the perspective of Dr. Brand or anyone on Earth?
9
Why bother with the planet at the event horizon?