I read it within the last 3-4 years in the United States in English, and I think it was a relatively new book at the time. The protagonist is a female, I think recently laid off from her job as a travel writer. She finds a notice on a messageboard (at a coffee shop?) for a local business looking for travel writers. She bulls her way into an interview despite them repeatedly telling her she's not suitable, and finds that the business caters to supernaturals. Long story short, despite her relative frailties and ignorance, she's engaged to build a guide to exploring the city when you're a vampire, a zombie, or the like. Most aspects of the supernatural are fairly traditional. Vampires need to drink blood and can hypnotize people with their gaze. Zombies are slow rotting corpses and eat brains (although there's a slight twist in that the brain-eating is an addiction of sorts and being without them results in them going on rampages to get their fix). I want to say that the human resources woman is a water-spirit of some sort.

Plot developments included the delivery of the zombie's brains being disrupted, nearly resulting in a rampage, a shadowy organization dedicated to killing the supernatural which the main character gets mixed up in, and a fortune-telling witch who favors the protagonist for being willing to buy her a coffee. The witch is somehow tied into the supernatural-slaying group, although I forget exactly how.

I'm pretty sure that it was set in a real-world city, maybe New York. The title might include the name of the city, and I think was entitled something like "Things to Do in Denver When You're Dead" (no, it's not that movie or book). The cover was mildly cartoonish and showed the protagonist walking down a street with some supernatural characters sprinkled in the background.

Och, rubber duck debugging of a sort. I decided to look through my library history and I found it.

The Shambling Guide to New York City by Mur Lafferty.

A travel writer takes a job with a shady publishing company in New York, only to find that she must write a guide to the city - for the undead!

Because of the disaster that was her last job, Zoe is searching for a fresh start as a travel book editor in the tourist-centric New York City. After stumbling across a seemingly perfect position though, Zoe is blocked at every turn because of the one thing she can't take off her resume --- human.

Not to be put off by anything -- especially not her blood drinking boss or death goddess coworker -- Zoe delves deep into the monster world. But her job turns deadly when the careful balance between human and monsters starts to crumble -- with Zoe right in the middle. 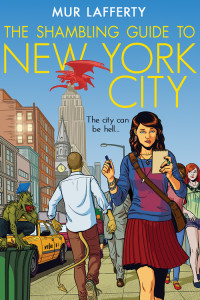 And it looks like she wrote a sequel, Ghost Train to New Orleans, so I'll have to check that one out.

5
fantasy- looking for a zombie/supernatural book

8
Late-90s book about teenagers who transform into supernatural creatures
10
Fantasy book about supernatural beings that can take drugs to get into a different world
1
Book About An Otter set in medieval times?
18
Trying to remember the title of a fantasy teenage aimed novel I read in the mid-1990s
7
Kindle book about a woman who helps remove ghosts from houses
36
A witch, a vampire and a pixie meet in a bar and talk about tomatoes eradicating humanity
4
Science Fiction / Fantasy book involving a young woman hired to read Tarot cards for a local lord, ends with her killing his brother for him