What is the function of a Wizard's staff? [duplicate]

In the Middle Earth universe, "Wizards" are actually Maia, angelic or god-like beings who have taken mortal form (and accepted some Human frailties) to act as guides and advisors in the struggle against Sauron. They have specialties (or at least personal preferences), determined by their association to whichever Vala they serve. Within Middle Earth they appear as aged Men with long beards, wearing robes of colors which denote their rank.

And they each carry a staff. 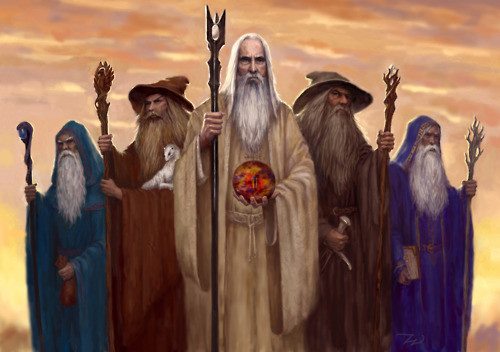 Why? If they are, themselves, semi-divine beings, then presumably all their powers (even in the abstract way that magic works in Tolkien's universe) come from their own selves, rather than from any devices. I've never heard of any tales about the "forging of the staves," and no one seems to be able to gain greater power by taking them. (At least, no one seems to try, and Sauron would likely be seeking them if their powers were transferable.)

Broken or lost staves seem to be re-creatable, but at the same time, the loss of one seems to be significant for the Wizard who loses it:

What is the function of the staff for one of the Istari? What does it allow them to do, that they would not otherwise be able to do? Is it a way of exercising their Maia-level abilities, when they are otherwise restricted to their mortal forms? Or are they a device crafted after the arrival of the Istari, sort of like the Rings, to expand and augment their natural magic?

What do we know about the staffs of the Wizards?

Note: I've read this question, which focuses on Gandalf's relative strength with and without the staff. This question is more general than that: what does the staff even do, and where do they come from?

Where did they come from?

We know that at least Gandalf arrived in Middle Earth with his staff; Unfinished Tales tells us as much (emphasis mine):

Of this Order the number is unknown; but of those that came to the North of Middle-earth, where there was most hope (because of the remnant of the Dunedain and of the Eldar that abode there), the chiefs was five. The first to come was one of noble mien and bearing, with raven hair, and a fair voice, and he was clad in white; great skill he had in works of hand, and he was regarded by well-nigh all, even by the Eldar, as the head of the Order. Others there were also: two clad in sea-blue, and one in earthen brown; and the last came one who seemed the least, less tall than the others, and in looks more aged, grey-haired and grey-clad, and leaning on a staff.

We know that at least Saruman had one, and it seems likely that the other wizards did as well; Saruman specifically mentions "the rods of the Five Wizards" shortly before Gandalf breaks his staff, and that seems like an odd comment to make if they didn't have them (although it's not impossible that he was speaking metaphorically). Whether they also came from Aman, or if they were fashioned later, is unknown.

We do know that they can be fashioned later, since Gandalf gets his new White staff in Lothlórien:

'Naked I was sent back - for a brief time, until my task is done. And naked I lay upon the mountain-top.

'Thus it was that I came to Caras Galadhon and found you but lately gone. I tarried there in the ageless time of that land where days bring healing not decay. Healing I found, and I was clothed in white.

Saruman also gets another staff, after he leaves Orthanc:

On the sixth day since their parting from the King they journeyed through a wood climbing down from the hills at the feet of the Misty Mountains that now marched on their right hand. As they came out again into the open country at sundown they overtook an old man leaning on a staff, and he was clothed in rags of grey or dirty white, and at his heels went another beggar, slouching and whining.

'Well Saruman!' said Gandalf. 'Where are you going?'

The Return of the King Book 2 Chapter 6: "Many Partings"

It's unclear if having it affects his power; both Gandalf and later Frodo suggest that Saruman has essentially no power left (more on that shortly), but we never see him try to use any power other than his hypnotic voice

What do they do?

This is very unclear, and somewhat self-contradictory, although the balance of evidence suggests some link between the power of a wizard and their staff.

In an answer to a related question, DVK summarizes some of the inconsistencies. Basically, nearly every time we see a wizard performing magic, he uses a staff. On the other hand, Saruman doesn't take Gandalf's staff when he imprisons Gandalf in Orthanc, something that seems like a critical oversight if the staff is critical to doing magic.

It's notable that Saruman is very de-powered after Gandalf breaks his staff. Gandalf himself says that the only power Saruman has left is his voice:

['] A snake without fangs may crawl where he will.'

'You may be right,' said Gandalf; 'but this snake had still one tooth left, I think. [Saruman] had the poison of his voice, and I guess that he persuaded you, even you Treebeard, knowing the soft spot in your heart.'

The Return of the King Book 2 Chapter 6: "Many Partings"

It doesn't make a lot of sense for Gandalf to have somehow blocked Saruman from his power. Physically embodied or no, Saruman is still a Maiar; he doesn't do magic, he is magical. The most reasonable explanation is that the power of a Wizard is tied to their staff somehow, although the exact nature of that relationship is unclear.

There's nothing in any of Tolkien's writings concerning the precise function of a Wizard's staff.

Of the two major possibilities, (1) that the staff is used for a source of power, either granting or merely enhancing a Wizard's power, versus (2) that the staff is a symbolic badge of office, the evidence in the texts favours the second.

The one critical point this hinges on is: Gandalf was able to defeat the Balrog without his staff (from The Bridge of Khazad-dum, my emphasis):

Despite this there are instances in the texts where Gandalf is seen to use his staff in the performing of magic (and the text of The Hobbit describes it as a "magic staff" at one point), so we need to consider a third possibility: the staff is something that may be used for performing magic, but it is not necessary and a Wizard is still quite formidable even without it.

It must also be considered that of the three Wizards that we know significant information about, Gandalf is the only one particularly associated with a staff. The Istari essay in Unfinished Tales highlights this even further, drawing attention to:

While the other Wizards may have staffs, the only one we actually have evidence of is Saruman: there is no mention of Radagast having a staff during Gandalf's account of his meeting with him. From that we can say with confidence that the popular image of each Wizard having a staff is a later fabrication and not based on anything in Tolkien's own writings.

In the end there is no firm conclusion. It is certainly the case that the staff is not a primary, or even a major, source of a Wizard's power, otherwise Gandalf would not have been able to defeat the Balrog without his. It's uncertain whether any of the Wizards besides Gandalf and Saruman even have a staff. Gandalf does use his staff in certain magical feats, but that may be just part of his disguise among Elves and Men.

We're going to have to put this one down as "Tolkien never wrote in sufficient detail about it".

Not the answer you're looking for? Browse other questions tagged the-lord-of-the-rings tolkiens-legendarium the-hobbit or ask your own question.

34
How much of Gandalf's power is tied to his staff?
55
Why didn't Saruman break Gandalf's staff on Orthanc as Gandalf broke Saruman's?
49
How did Gandalf get his staff back after being captured by Saruman in Orthanc?
48
Why aren't the Valar considered gods?
17
Where does "magic" come from in LOTR?

49
How did Gandalf get his staff back after being captured by Saruman in Orthanc?
34
How much of Gandalf's power is tied to his staff?
4
Why didn't Gandalf carry the Ring in Maia form?
31
Why don't the people of Rohan recognize Gandalf's staff?
55
Why didn't Saruman break Gandalf's staff on Orthanc as Gandalf broke Saruman's?
54
When did Bilbo and Frodo learn that Gandalf was a Maia?
27
Why didn't Gandalf prevent or lessen Saruman’s damage to the Shire?