In the medal ceremony in Star Wars: A New Hope, is Chewbacca giving orders?

Chewbacca, Han, and Luke walk down the aisle. The rebels are standing at attention in parade formation on either side, facing the aisle. Chewbacca howls. The rebels stamp their heels and turn to face the front of the room. The medals are handed out (I know, Carrie couldn't reach Chewbacca's neck, and Wookiees supposedly shun medals anyway). Then Chewie turns around and howls, and the rebels applaud.

Is this just coincidence, or is Chewbacca giving orders ("Face Front!", "At ease!", etc)? Was he an officer at this point?

The script only says "Chewbacca is confused", which doesn't seem to match what we see on film, and also insults his intelligence.

As far as I can tell, not. The majority of troops aren't likely to speak conversational Wookiee and the script indicates that the event was pre-planned.

Given that the novelisation doesn't even mention Chewie's dialogue, the closest we can get to a reliable source is the NPR radio drama script, originally considered G-Canon but alas now merely a "legend".

Luke : You're supposed to be serious!

Han: I bet they're tired of staring at each other. Chewie, give 'em "eyes front"!

Chewie: HOOTS A COMMAND IN WOOKIEE

Sound: Either by coincidence or by cosmic predetermination, the massed rebels obey, facing the dais.

As @wadcheber has pointed out, although the official novelisation doesn't mention Chewie's dialogue, it does show that the crowd cheered on Leia's signal, not Chewie's bark.

She placed something heavy and golden around Solo’s neck, then Chewbacca’s—having to strain to do so—and finally around Luke’s. Then she made a signal to the crowd, and the rigid discipline dissolved as every man, woman, and mechanical present was permitted to give full vent to their feelings.

Interestingly, it appears that the clapping at the end was not the dismissal of the troops. According to the new Marvel Comic Princess Leia #001 (considered a canon source of information about the events following "A New Hope") the troops actually remained in place for a speech by Leia, a minute's silence for the fallen of Alderaan and were then dismissed by General Dodonna. 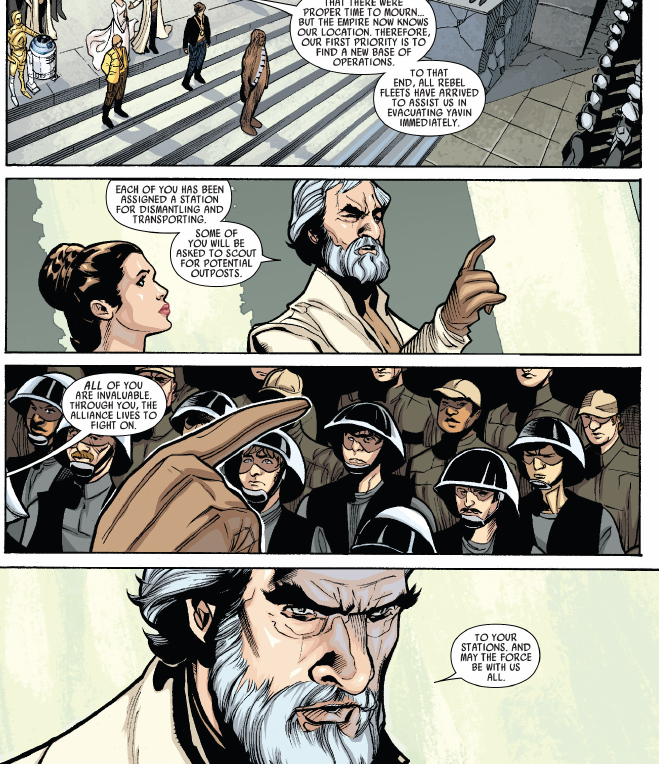 I found the answer in someone else's answer to a different question I asked. In an Ask Me Anything with Peter Mayhew (Chewbacca), this exchange happened:

QUESTION: As for me, I think that Chewbacca deserved a [medal] after the first death star destruction. What was that last word he spoke in Episode IV? Did it have something to do with not getting a [medal]?

PETER MAYHEW'S ANSWER: No, actually, the last words Chewie spoke in Episode IV was to dismiss the troops and thank them for their service.

Clearly, he was indeed giving orders.

I asked my buddies - one is an officer, helicopter rescue pilot, and instructor in the U.S. Coast Guard, the other is a Sergeant in the U.S. Army - what they think.

The Coast Guard officer, who is also a Star Wars buff, says this (by the way, Capy is my dog):

Interesting...hadn't watched the scene in months, and if you'd asked me cold I would have told you my recollection of Chewie's roaring was as if you'd taken Capy to city hall to get the key to the city and she randomly barked. But watching it now it seems clear that Chewie is, in fact, calling out the commands.

The US Army Sergeant said:

Well I'm an NCO, not an Officer, but I would point out that the majority of drill and ceremony commands have a preparatory command followed by a command of execution: Forward_March, Column-Right_March, Company_Attention, etc. There also single word commands knows as combined commands: Rest, Fall-Out, Fall-In, etc.

Some notes from a military study guide may help:

"b. The command of execution is the command that indicates when a movement is to be executed. Give it in a sharper tone and in a slightly higher pitch than the last syllable of the preparatory command. It must be given with plenty of snap. The best way to develop a command voice is to practice."

So one could infer that the Wookiee is simply giving a combined command: "Clap." Which would preclude the use of a preparatory command and command of execution. However I would note the slight rise of inflection near the end of the first instance which may merely be an example of poor form.

Being ex-military, the immediate response to both barks would lead me to believe they are orders.

As far as being an officer, giving parade orders could be given by an officer or NCO. The fact that Chewie is a pilot, I am inclined to think that he is an officer.

Not the answer you're looking for? Browse other questions tagged star-wars a-new-hope chewbacca or ask your own question.

26
Is there a script that contains Chewbacca's/Peter Mayhew's dialogue (in English)?

63
Why didn't Chewbacca get a medal after the battle of Yavin?
34
How did Princess Leia pay Han Solo's reward in Star Wars: A New Hope?
37
A New Hope: Why doesn't the Death Star scramble more TIE fighters?
17
In universe answer for Rebel uniforms in *Star Wars Episode IV: A New Hope*?
59
In Star Wars: A New Hope, why was one officer dressed in white?
67
Who is this character on the Star Wars: A New Hope poster?
7
Star Wars: Battlefront II EA Trailer - Who is the figure in red giving Versio orders?
38
Did Vader actually die in the original Star Wars movie, now known as A New Hope?
4
Was Star Wars' Chewbacca character inspired by Saberhagen's Berserker's aiyan creature?