Why did King Robb not return to the North via the alternate route through the Bay of Crabs?

After his conquests in the Westerlands when King Robb returns to Riverrun, his first priority was retaking the North from Iron Islanders. His marriage to Jeyne Westerling had alienated the Freys and matters were further complicated by the treasonous murders committed by Karstarks. His passage to The North via The Twins was in peril.

As per Catelyn Chapter III in ASoS he was actively exploring alternate routes to go North, including through the Bloody Gate of Vale:

Robb: I've asked only that she (Lysa Arryn) open the Bloody Gate for us, and provide ships at Gulltown to take us north. The high road would be hard, but not so hard as fighting our way up the Neck. If I could land at White Harbor I could flank Moat Cailin and drive the ironmen from the North in half a year.

He was spending a lot of time brooding over the maps. Why did not he or any of his counsellors think of the following route: 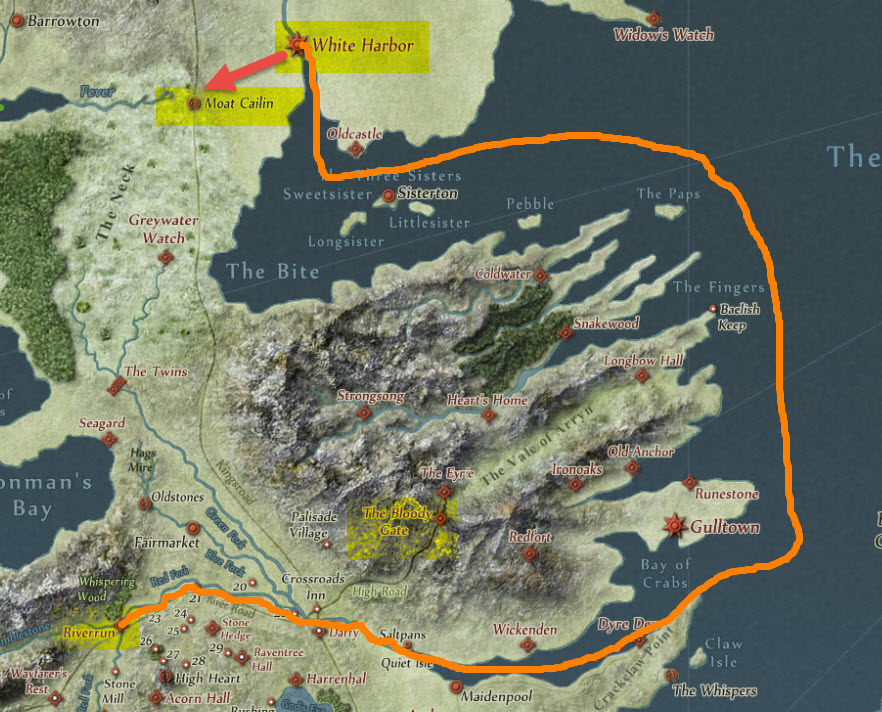 Admittedly, it would have been a long sea journey and the only show stopper I can think of could be lack of sea-faring vessels at his disposal. But he only needed ships to carry his men and not war-ships. Certainly, the naval prowess of Riverlands at his disposal was sufficient for this voyage?

PS : I am still in the middle of ASoS, so beg your pardon if there is a reference of this option (and reasons it was not feasible) in subsequent chapters.

I think there are two things that you are overlooking.

Even the risk of this would be enough to discourage Robb and his advisers, they would not want to potentially fight through an entire army, only to then go and fight another, their forces would be decimated. In order to retake the North they needed as many men as possible.

The reason they wanted to go through the Vale and depart from Gulltown would have been to avoid any confrontation with the Lannisters. This would be via land or sea, as departing from the Saltpans would mean a much longer sea journey, and the Lannisters backed up with ships from Highgarden could also have intercepted them easily.

Secondly, there are the logistics of such movements. Having to move an army across the country from west to east, then carry them across the sea, all whilst keeping them fed, and also transporting all of their weapons etc. is very costly. I'm not sure if it's explicitly stated where any ships from the Riverlands might be, but they might not all be able to reach the eastern shore to transport them.

This would mean hiring civilian vessels, most likely merchant ships, to transport troops. Those ships would not doing any trading at this time, so they would have to be compensated for that, even if they do agree to take them. Hiring individual ships to do this would be ridiculously costly, and the Starks had already spent a lot of money on this war.

Then the merchant ships would have to make a journey they possibly haven't made before. And it's not like they would be an organized force, hiring merchant ships might mean that some troops arrive there in 2 weeks, and some in 2 months. They would then have to regroup and only then could they attack Moat Cailin.

It's also unlikely Robb or the Stark bannermen would have chosen to trust civilian vessels to carry large chunks of their army overseas.

I think you've found the problem yourself: lack of sea-faring ships.

There are two important factors here.

First of all, there are several reasons why the sea travel is not an attractive option:

The second factor is that Rob truly believes that he can put a diplomatic solution to their feud with the Freys. This will open him safe pass to a ground enter in the North, faster, cheaper, being less vulnerable to a counterattack, and with it's army in better conditions.

31
Why did Robb not pursue alternative ways of crossing the river in "Baelor"?
23
Why did Tywin Lannister already have his army mobilized as the North marched south?
31
Why did Robb attack Tywin Lannister's Army at the same time as his surprise attack on Jaime?
25
Confusing movements of Lannister Armies under Jaime and Tywin?
18
Why did Melisandre not die by the poison in ACoK?
16
Did Robb have a Hand of King in the North?
8
Does the North know that Ramsay did not marry Arya?
4
Why did King Aerys demand the death of Robert Baratheon and Eddard Stark?
4
Why is the Rhoynar religion not as prevalent in Dorne as the Old gods are in the North?