Why did Obi-Wan use his lightsaber in the Mos Eisley Cantina?

In the Mos Eisley Cantina, Obi-Wan uses his light saber to protect Luke from a patron attacking him. Jedi (and I would assume, lightsabers) are very uncommon, so I would imagine Kenobi's attack would attract some attention. Why did Obi-Wan use his lightsaber if he is trying to stay hidden?

At that point in the story, Kenobi was no longer that concerned with staying hidden.

Prior to the cantina fight in Episode IV, Kenobi was maintaining a low profile. During his time on Tatooine, Ben Kenobi had several run-ins with the local riff-raff. In all such instances, Kenobi avoided using his lightsaber as much as possible for the very reason you bring up. Instead, he would use a combination of Force abilities - mainly telekinesis and mind tricks - to drive away the attackers. This is, in fact, how Kenobi got his reputation of being a "crazy old wizard".

LUKE: You know, I think that R2 unit we bought might have been stolen.

OWEN: What makes you think that?

LUKE: Well, I stumbled across a recording while I was cleaning him. He says he belongs to someone called Obi-Wan Kenobi.

Uncle Owen is greatly alarmed at the mention of his name, glances at Beru.

LUKE: I thought he might be related to Old Ben. Do you know what he's talking about?

OWEN: That wizard's just a crazy old man. Tomorrow I want you to take that R2 unit into Anchorhead and have its memory flushed. That'll be the end of it. It belongs to us now.

During the scene you mention, Kenobi knew that he and Luke would be leaving the planet soon, so secrecy was not a top priority. He also knew that brandishing the weapon would put a quick end to any other trouble. However, he did indeed realize that the lightsaber might draw the wrong kind of attention, which is largely why he was in a hurry to leave following the confrontation.

UPDATE: @Schwern brought up a good point... why would Kenobi knowingly come out of hiding if he's wanted by the Empire? Here's what I think (obviously this is speculation):

Obi-Wan Kenobi was only maintaining a low profile so that he could watch over Luke on Tatooine. If not for that, it's highly possible that both he and Yoda would be helping, if not leading, the Rebellion. As it is, we don't know that The Emperor & Vader are even looking for the pair. In fact, they probably assume that both Jedi Masters are dead by now. Given this fact, now that he is leaving the planet with Luke and heading off to assist and/or join the Rebel forces - who are very much on the Empire's radar - he probably sees little reason in maintaining such a low profile. He may not be broadcasting his location to the galaxy, but he also isn't going through as much trouble to stay hidden. And let's face it - when you're the man who maimed Darth Vader and you're about to get involved with the Rebellion, you're probably not that concerned about a bar fight on a sparsely-populated Outer Rim planet.

In short, he goes for his lightsaber because his and Luke's lives are in imminent danger. Both smugglers have proven resistant to Jedi mind tricks, Luke is lying on the floor with a possible head wound and the smuggler is waving a blaster around in a crowded bar room. Disarming the smuggler (literally and figuratively) is the quickest and safest way to prevent any further injuries.

The creature’s chrome pistol fired once, blowing a hole in the door. Then the torso peeled away as neatly as had the body of the rodent, its two cauterized sections falling in opposite directions to lie motionless on the cool stone. Only then did the suggestion of a sigh escape from Kenobi; only then did his body appear to relax. Bringing the lightsaber down, he flipped it carefully upward in a reflex saluting motion which ended with the deactivated weapon resting innocuously on his hip.

That final movement broke the total quiet which had enshrouded the room. Conversation resumed, as did the movement of bodies in chairs, the scraping of mugs and pitchers and other drinking devices on tabletops. The bartender and several assistants appeared to drag the unsightly corpses out of the room, while the mutilated human vanished wordlessly into the crowd, cradling the stump of his gun arm and counting himself fortunate.
A New Hope : Novelisation

Additionally, we know from the new Junior novelisation (Star Wars: A New Hope: The Princess, the Scoundrel, and the Farm Boy) that lightsabers aren't unheard-of in the Empire, just very rare and considered to be drastically antiquated. Possessing one doesn't seem to mark you out as a Jedi, just someone with a bit of a Jedi fetish:

“Yeah, hard to miss the sword, pal. Of course I know what a lightsaber is. I wonder what antique trash heap he found it in.”

The lightsaber was the chosen weapon of the Jedi Order, who served as peacekeepers in the Old Republic—pre-Emperor Palpatine’s takeover. There was some religious mumbo jumbo about meditation and something called the Force. A great big wad of nonsense, if you asked Han. Their kind had been extinct so long they were practically ancient history.

That being said, the (canon) Star Wars Original Trilogy Stories Collection has a slightly different take on it. The possession of a lightsaber evidently does mark you out as a Jedi.

“You just watch yourself,” Evazan said. “We’re wanted men!” Obi- Wan drew his lightsaber to defend Luke. Everyone in the cantina knew that someone with a lightsaber was sure to be a Jedi Knight and, therefore, not someone that they wanted to fight. After that, no one else bothered Obi-Wan and Luke. Once again, the Force had saved them.

Unlike the previous answer that states this is a plot-flaw, I think this was written on purpose to introduce the lightsabers as soon as possible in the series. After all, lightsabers are one of the coolest things about star wars.

Actually, it's not only about introducing us the lightsabers, but to introduce them to Luke, since he is going to become a Jedi.

And as most previous answers have stated, Obi-Wan doesn't need to maintain a low profile any more, there is a new hope and the return of the Jedi is not far away.

Nobody's given one possible out of universe explanation - Lucas originally intended lightsabers to be mundane, common weapons. There is even pre-production art showing Stormtroopers wielding them. So Ben is just using the one weapon he possesses. 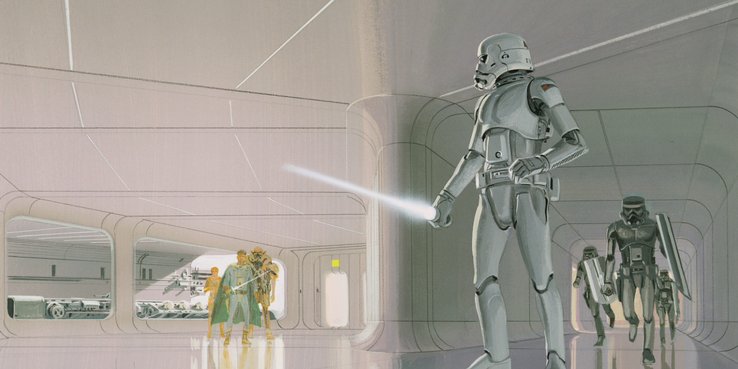 I know I'm going to get down-voted for this, but I honestly thought this was a plot-flaw / bad setup to generate a narrow escape from the planet later. This is not a comment, it is a genuine answer. The answer is that the author just didn't come up with a better way of generating a narrow escape.

It was good that then Luke and Ben had to rush off the planet under fire to make for an exciting escape. But it wasn't so good in that a critical viewer would realize that Ben Kenobi has various more subtle tactics to defend them. He'd used more subtle tactics just prior and remained undetected. Why wouldn't he use subtle tactics again and remain undetected right up until they left? Why not just wave his fingers and say, "my friend is just a goofy teenager, not worth your time to bother with."

So, sorry, it was an imperfection in the plot.

In Star Wars: The Jedi Path (Daniel Wallace, 2011) There is clear mention of how a lightsaber should be used to incapacitate an opponent. In brief removing an arm is considered a last resort when simply slicing the weapon is less damaging (and therefore more honourable/aligned with the Light path). Removing an opponent's arm is usually reserved for dueling when the opponent is still dangerous without a weapon (Dooku removing Anakin's arm, Vader removing Luke's.)

So as to "why" Kenobi removed his arm in the situation when he had every opportunity to just destroy the weapon probably requires another question to be asked. Three possibilities are:
a) Luke was in immediate danger, and possibly just destroying the blaster wouldn't get the point across (perhaps the attacker had other weapons);
b) perhaps it would have started a riot if he didn't show everyone else in the cantina he was serious;
c) as mentioned above, it was simply convenient for the scriptwriters.

Slightly off topic, but shortly after the scene we see Han shoot the bounty hunter. This sets up a contrast with Kenobi (who could have just as easily killed his opponent but did the more honourable thing of "only" removing his arm). This contrast is then continued during the trip to Alderaan, when Kenobi is schooling Luke in the ways of the force, while Han is deriding most of what he's being told as religious rhetoric.

So to answer the original question, in the brief seconds he had to appraise the situation, Kenobi realised that mind tricks wouldn't work, and serious (yet non-lethal) action was required. Even simply destroying the weapon would have been more in line with Jedi teachings (as would avoiding the confrontation and breaking his cover in the first place) but the situation had moved beyond a peaceful resolution.

19
Why did Obi-Wan lop off Ponda Baba's arm?