Can Force Lightning be projected from a distant source (e.g. the sky)?

Can Force Lightning be projected from a distant source (such as the sky or a charged object) rather than from a Sith's body?

If possible, this could potentially (EE pun intended) make it more difficult for a Jedi to defend against since the Jedi could be attacked from above or behind. However, I can't recall a situation where this was done so perhaps it is not possible.

To give an example of what I mean (and my inspiration for the question), here is a .gif of a Lightning/Ionic Storm from the video game inFAMOUS 2 (taken from this video):

Note: Canon and Legends examples are both acceptable, though I prefer answers which do not cite a video game because the projection could be a game mechanic (or limitation) rather than a true use of a distant source. For example, this screenshot from KOTOR II shows Force Storm, which arcs above the enemies' heads (perhaps as a way for the game to show the lightning hitting multiple enemies) but is projected from the player character's hand: 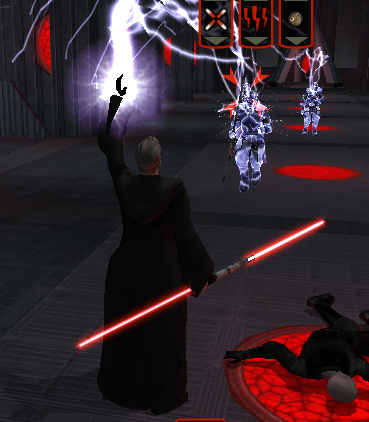 I will upvote any answer which provides an example (even if from a video game) but I will accept the answer with the most canonical example (unless, of course, there are no examples).

Yes. There are several variations of Force Lightning featured throughout the Legends canon. Most of these variations, like basic Force Lightning, originate at the hands and are considered primarily a Dark Side ability. One of the most powerful variations, however, is called Force Storm and appears in the air above the targeted area.

Although featured heavily in the Star Wars videogames, the Force Storm ability also makes appearances in the comics and novels. It was used to blanket an area in Force Lightning, thus affecting multiple targets or even shielded targets. The ability is rare, however, as it requires tremendous concentration & focus. Outside of various videogame continuities (KotOR 1/2, TOR, Force Unleashed), the Force Storm ability has also been featured in the Darth Bane and Dark Empire comic arcs. Emperor Palpatine himself was such a strong user of the Force Storm ability, he could conjure a Force Lightning cloud comparable to a hurricane, and even project it into space above a planet or ship. 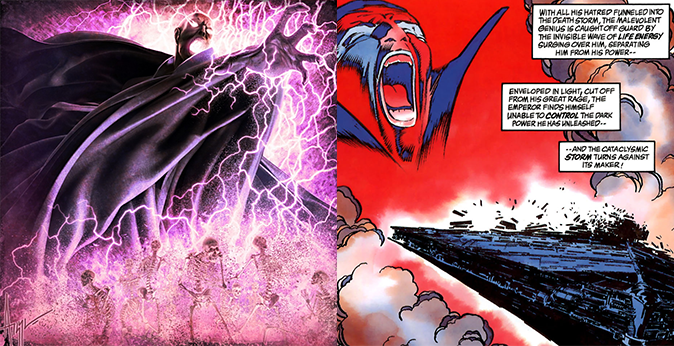 Another, less powerful variation of Force Lightning known as Sith Barrage (or Lightning Barrage), featured the lightning originating from the ground under the victim instead of at the caster's hands/fingertips. The resulting effect was very similar to an actual lightning strike, with the bolt rising vertically from the ground upwards (through the victim).

Not the answer you're looking for? Browse other questions tagged star-wars the-force sith star-wars-legends or ask your own question.