Are there beings which have perfected hiding?

At the end of Listen, I got the feeling they wanted to write it off as an illusion of the Doctor, since Clara grabbed his ankle when he was a kid. So because of this there are no beings which perfected hiding, they just do not exist. Is this what they were going for? is it open to our own interpretation? or are there actually beings which have perfected hiding?

It just isn't really clear to me.

To me, those beings do exist since we saw the Doctor placing the chalk on the book where as it wasn't there anymore when he wanted to pick it up and listen was written on the board. We did not see the Doctor do it and the camera was on him the whole time right?

On a side note I was really on edge when I saw LISTEN on the board. A week long I humored my self thinking they might be real.

Every spooky situation in the episode has a rational explanation. For example:

Maybe there are beings that have perfected hiding, but that doesn’t mean the Doctor has just found them, or any evidence for them. By their very nature, such creatures would leave no evidence of their existence, unless they chose to do so.

The only way to prove their existence is to find a situation in which the only explanation is creatures with perfect hiding, and we don’t have any of those. (And indeed, if we can find evidence that they exist, isn’t their ability to hide not quite as perfect as we might think?)

Of course, it is also impossible to disprove their existence. However hard you argue that there isn’t one standing right behind you, I could argue that it’s so good at hiding that you could never notice it standing there, and you have no way of proving me wrong. (If we take “perfect” to the extreme.)

I have a screenshot that I think proves there was indeed a creature, and the doctor and Clara just convinced themselves there wasn't. I took said screenshot at 19 minutes and 50 seconds into the episode, right after the blanket slid off the creature and onto the floor as it was standing behind the Doctor, Rupert, and Clara in Rupert's bedroom. 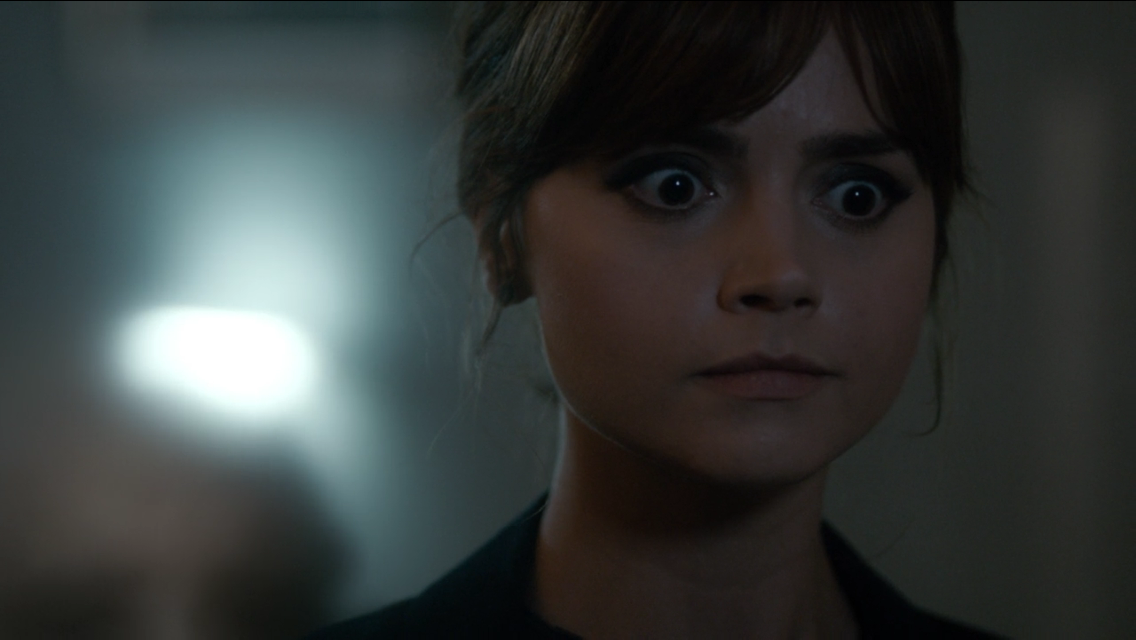 There is a bald, grey-skinned, reflective head in the background, behind Clara and to the left side of the image, with light reflecting off the top of the head. The last time I checked, that's not what the head of a human child playing a joke looks like. That also doesn't look the head of an adult human. Even though a grown man might have a bald, reflective scalp, it would not look so grey, and the eye sockets wouldn't be set so deep in the head. I believe this strongly suggests, if not proves, the creature's existence. And although I do not have a screenshot, the creature disappeared instantly in a flash of blue light when Rupert promised he would never look. Also not the behavior of a small boy scaring his friend. I've seen it suggested that the head in the background is that of a Sontaran, but hiding under blankets and scaring children is not how a sontaran would act. If it was a Sontaran, it would have shot them all, for sure. Also, why did it run? Is running away not one of the greatest dishonors to a Sontaran soldier? Furthermore, when we see it while it is still covered by the blanket, it is relatively tall and thin, not potato-shaped. I believe it is the hiding creature.

35
So, if there was nothing there but fear, who or what was under the blanket?
9
What was that alien in Doctor Who that nobody saw?

15
Who is the eye patch woman?
10
How did the Doctor join the others outside the TARDIS without opening its door?
22
Who has been the Doctor's companion for the longest time?
5
The “exit strategy” in Doctor Who: Time Heist
18
When do phone calls to the TARDIS come through?
14
Why wasn't Clara displaced by the Weeping Angel?
9
What was the important thing Clara said to the Doctor in the cloisters?
12
Why did the TARDIS take them to the Doctor's childhood and why didn't she want the Doctor to know where they were?
7
Was Clara's “I love you” directed at the Doctor?