On the 8th of April Marvel released the Star Wars Legends epic collection volume 1. Many people say any Star Wars comics that come under legends are not canon, but people also say that any new Star Wars comic is canon. I've also heard some of the expanded universe is canon, is this the comic book of what is canon in the legends comics?

The answer is a resounding "no". These are old comics that have been collected, rebranded and are now being re-released. As such they're part of the "Legends" canon, as clearly evidenced by the "legends" banner on the cover. 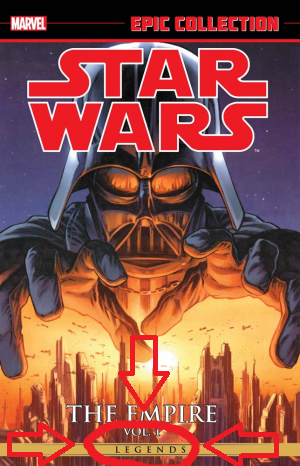 As to the status of new material, According to the writer of the Darth Vader comics serial; Kieron Gillian, the answer is that all new Star Wars comics are part of the main canon, at the same level as the theatrical films and the 'Star Wars: Clone Wars' and 'Star Wars: Rebels' TV shows.

So all of those things came together and it was like, "Yes! This is great! I get to do the story of Darth Vader from the end of the first "Star Wars" film to the start of " The Empire Strikes Back!" It's a big story too. It's not just that I want to write Darth Vader. It's that I get to write this story of Darth Vader and it's all in canon. As far as Lucasfilm is concerned, this is what happened.

As the title implies, The Empire is part of the Legends continuity, which is confirmed as non-canon.

According to Wookieepedia, this is a collection of old EU comics:

Although technically this is a new release, it's a re-packaging of old material; the canonicity of each work is unchanged.

A statement by Marvel Comics SVP David Gabriel confirms that the Epic Collection is going to be a collection of old comics from the history of the Expanded Universe, which means this title is firmly Legends (emphasis mine):

"We're thrilled to be bringing our innovative Epic Collections to a galaxy far, far away. We'll be bouncing around to different periods of Star Wars history with each Epic Collection, constructing one huge tapestry, collecting full unbroken runs of all the greatest Star Wars comics from the past 35 years."

It's always possible that details from these comic stories will be incorporated into canon at some future date; in the answer I link to above, Richard quotes LucasFilm Senior Editor Jennifer Heddle, who says in response to a question:

Mike (@Hooperswan): does this mean everything post Return of the Jedi is no longer cannon [sic], but everything before is canon or is it all non-canon now?

Jennifer Heddle (@jenheddle): It's all non-canon, but it all exists as a resource that could be used down the line.

But if that happens, these comic stories will still be non-canon unless LucasFilm explicitly says otherwise.

105
How is canonicity of derivative works determined for Star Wars?
11
Did Disney officially call Legends/EU material “Not canon”?

44
When did the Sith enter the Star Wars canon?
4
What does the Clone Wars animated series add to the recent Star Wars Trillogy?
11
Did Disney officially call Legends/EU material “Not canon”?
12
Will Disney Allow New Star Wars Legends Books?
18
What Legends material did The Force Awakens explicitly contradict?
11
Are there any online projects, groups, etc. trying to continue the “Star Wars Legends” timeline?
14
Are Legends legends?
4
When does the Lando comic from Marvel take place?
2
Given that Grand Admiral Thrawn was first seen in the LucasArts game 'Tie Fighter', is he canon?